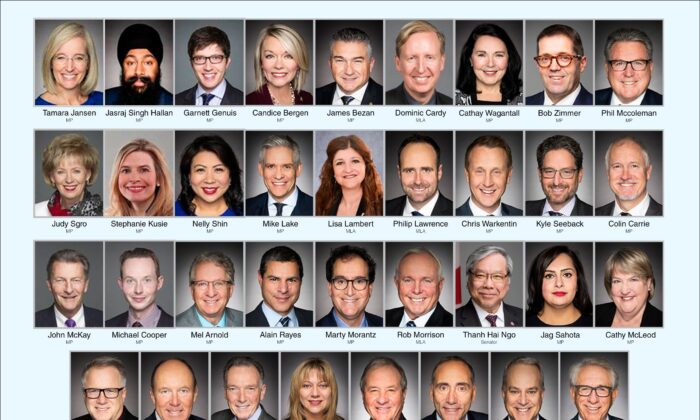 The 35 legislators who signed a joint letter to Prime Minister Justin Trudeau urging sanctions on Chinese officials instrumental in the persecution of Falun Gong adherents in China. The Chinese regime launched the persecution campaign on July 20, 1999.

Over 30 lawmakers have signed a joint letter to Prime Minister Justin Trudeau urging Canada to sanction Chinese officials for the persecution of Falun Gong adherents in China.

The call comes as July 20 marked yet another anniversary of the violent suppression and hate propaganda campaign launched by the Chinese regime against the spiritual practice 22 years ago.

“With this anniversary, we, the undersigned, urge the government to condemn the relentless human rights violations of Falun Gong practitioners and call for the Chinese Communist Party (CCP) to end the persecution,” states the letter issued on July 19.

Thirty-five legislators, including MPs, a senator, and provincial MLAs, urged the federal government to impose sanctions on CCP officials complicit in the ongoing persecution.

“On account of the gravity and scale of the human rights violations of Falun Gong, we believe that sanctions against the perpetrators will be effective in furthering the interests of international justice and human rights,” the letter said.

Falun Gong is a spiritual practice that includes meditation exercises and teachings based on the principles of truthfulness, compassion, and tolerance. Also called Falun Dafa, the practice was introduced in China in 1992, where it gained widespread popularity for the many benefits to people’s mental and physical well-being. By 1999, it had attracted 70-100 million adherents, according to official Chinese government estimates.

But then-CCP leader Jiang Zemin perceived that popularity as a threat to the regime’s rule, and on July 20, 1999, launched an Cultural Revolution-style campaign aimed at eradicating the practice. Several million Falun Gong adherents have been detained in the years since, with an estimated 1.5–2.5 million held in labour camps in 2010 alone, according to the Falun Dafa Information Center.

Speaking at a rally in Edmonton on July 17, Conservative MPs Michael Cooper and Garnett Genuis said sanctions would be an effective measure against the perpetrators.

Sanctions under Canada’s version of the Magnitsky Act include seizing or freezing assets in Canada of foreign nationals responsible for gross violations of internationally recognized human rights, as well as barring their entry.

Genuis, who is vice chair of the House of Commons Special Committee on Canada-China Relations and co-chair of the Inter-Parliamentary Alliance on China (IPAC), said Magnitsky sanctions are “not just a symbolic measure.”

“It really stops officials from abusing human rights when they know they may be subject to Magnitsky sanctions,” he said.

Along with the joint letter, the Falun Dafa Association of Canada submitted a list of over 150 individuals complicit in the persecution of Falun Gong in China, highlighting Jiang and key abettors from the communist regime.

“They were selected because their egregious and extensive participation in this human rights atrocity is well-documented, and their eligibility for sanction under the Act is beyond dispute,” said MP James Bezan when initially submitting the list to the government on June 11.

Two officials on the list—Yu Hui, a former office director of the 610 Office in Chengdu City, Sichuan Province, and Huang Yuanxiong, chief of the Xiamen Public Security Bureau Wucun Police Station—have already been sanctioned by the U.S. government. The 610 Office is an extra-legal Gestapo-style agency the CCP created specifically for persecuting Falun Gong.

During a press briefing on July 19, U.S. State Department spokesman Ned Price called on Beijing “to immediately cease its campaign against Falun Gong practitioners and release those imprisoned due to their beliefs.”

Also on July 19, IPAC, an international group of cross-party legislators, issued a statement to mark the 22nd anniversary of the persecution.

“Hundreds of thousands of Falun Gong practitioners have been imprisoned over the past two decades, where many are subjected to the most severe forms of torture. Particularly concerning are reports of forced organ harvesting of Falun Gong practitioners and prisoners of conscience in China. Analysis conducted by the independent China Tribunal concluded that such practices have been enacted on a widespread, state-sponsored, and systematic level,” the statement said.

“Democratic states must take actions to stop the trade and use of forcibly harvested organs globally. The Chinese government must be held accountable for upholding the human rights of all peoples in China.”