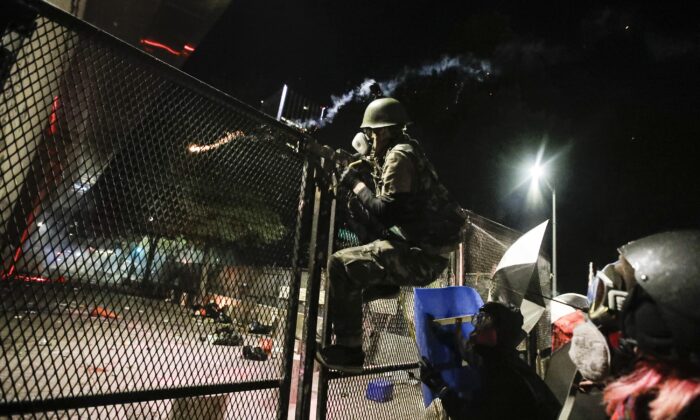 “This is a quote from the mayor; he’s come a long way,” Trump said at his golf club in Bedminster, New Jersey.

The president proceeded to share a slightly altered version of Wheeler’s comments. The mayor told reporters: “When you commit arson with an accelerant in an attempt to burn down a building that is occupied by people that you have intentionally trapped inside, you are not demonstrating, you are attempting to commit murder.”

“He’s come a long way when he made that statement,” Trump added.

Portland officials have struggled to quell the violence that’s continued virtually nonstop since late May. Rioters linked to Antifa, a far-left, anarcho-communist group, have inflicted tens of millions of dollars in damage and lost business on downtown. A number of business owners and officials have boarded up doors and windows to try to protect the buildings.

City, state, and federal officials reached an agreement late last month that saw Oregon state police rush to the city to help deal with the violence.

Wheeler originally blamed federal officers for the mayhem and joined rioters one night outside the courthouse. Demonstrators say the Trump administration used disproportionate force, and several actions taken by officers are under internal investigation.

Asked how the situation would end, Wheeler told reporters in mid-July: “We get rid of the feds. Number two, we contain and de-escalate the situation. Number three, we clean up downtown. Number four, we open up for business.”

That plan has failed. Wheeler took different stance this week, vowing to use every tool at his disposal to quell the riots.

“This is criminal activity. It’s serious. Lives are at stake. And I’m authorizing the Portland Police Bureau and our affiliated agencies at Multnomah County and the state of Oregon to do whatever is necessary to safely hold those individuals accountable who are engaged in criminal activity and bring these nightly activities to a close,” he said.

Trump echoed warnings journalist Andy Ngo made to Congress in Washington, telling reporters on Friday: “What you’re seeing in Portland is the radical left’s agenda in action. Portland is their roadmap for America.”

Referring to how the National Guard helped quell unrest in Minnesota in June in the wake of George Floyd’s death, Trump said the same thing could happen in Portland, but only if Oregon Gov. Kate Brown, a Democrat, and Wheeler requested assistance.

“We would be able to solve the Portland situation immediately, but we are supposed to be asked. If we’re not asked and if it continues, we’ll have to make a decision. But it’s a very easy thing for us to do. We could stop it very quickly,” he said.

Spokespersons for Brown and Wheeler didn’t respond to inquiries about the offer.