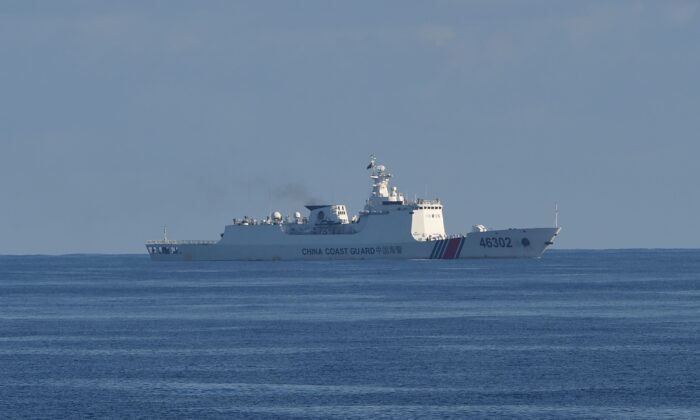 A Chinese coastguard ship sails along the area of a joint search and rescue exercise between Philippine and US coastguards near Scarborough shoal in the South China Sea on May 14, 2019. (TED ALJIBE/AFP via Getty Images)
BY CATHY HE

The United States on Aug. 26 took action against 24 Chinese state-owned companies, as well individuals involved in Beijing’s military aggression in the disputed South China Sea, as the Trump administration escalates its responses to threats posed by the Chinese Communist Party.

The commerce department said in a statement that it added two dozen Chinese companies on a trade blacklist for “helping the Chinese military construct and militarize the internationally condemned artificial islands in the South China Sea.” The designation bars American firms from doing business with these companies unless they obtain a special license.

The state department also announced it will start imposing visa restrictions on Chinese citizens “responsible for, or complicit in” building or militarizing these artificial islands or Beijing’s “use of coercion against Southeast Asian claimants to inhibit their access to offshore resources.” The individuals will be denied entry into the United States, it said, adding that this may also apply to the individuals’ family members.

The actions come a month after the United States formally rejected Beijing’s “unlawful” territorial claims in the South China Sea and condemned its “campaign of bullying” in the region. The Trump administration has also imposed sanctions on Chinese and Hong Kong officials, citing their participation in rights abuses in the regions of Xinjiang and Hong Kong respectively.

Beijing has territorial claims over most of the waterways covering the South China Sea, which were ruled as unlawful in a 2016 decision by an international tribunal. Philippines, Vietnam, Malaysia, Brunei, and Taiwan have competing claims in the waterways. Home to rich fishing grounds and potentially valuable natural resources, the South China Sea is also one of the world’s major shipping routes.

The regime has in recent years sought to bolster its claims in the strategic waterway by building military outposts on artificial islands and reefs. In addition, it has deployed coast guard ships and Chinese fishing boats to intimidate foreign vessels, block access to waterways, and seize shoals and reefs.

Beijing used state-owned companies to dredge and construct more than 3,000 acres of artificial features in the South China Sea, which include air defense and anti-ship missile installations, the commerce department said.

Among the companies added on the commerce department’s “entity list” are five subsidiaries of Chinese state-owned construction giant China Communications Construction Company (CCCC). Secretary of State Mike Pompeo said in a statement that CCCC has led the dredging of outposts, and is also one of the lead contractors used by Beijing in its “Belt and Road” strategy, a massive infrastructure investment project aimed at expanding the regime’s influence worldwide. Washington has criticized the project as being a “debt trap” for developing countries who may be saddled with heavy debt burdens they cannot repay.

“CCCC and its subsidiaries have engaged in corruption, predatory financing, environmental destruction, and other abuses across the world,” Pompeo said.

“The PRC [People’s Republic of China] must not be allowed to use CCCC and other state-owned enterprises as weapons to impose an expansionist agenda,” he added.

A previous version of this article incorrectly stated the number of CCCC subsidiaries that were placed on the entity list. The Epoch Times regrets the error.