John A. Macdonald Deserves Recognition for Building Canada Into a Nation 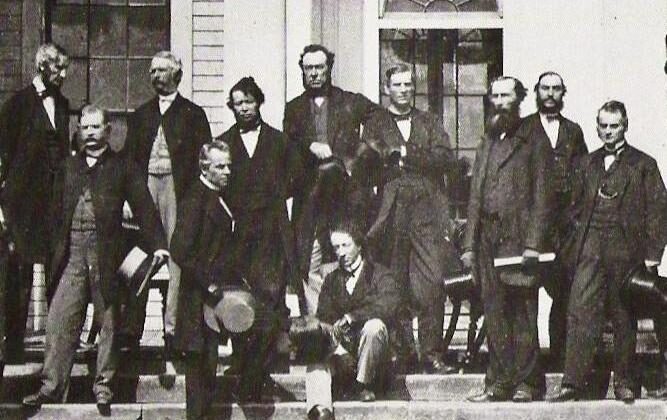 Some of the Fathers of Confederation photographed at the Charlottetown Conference where they had gathered to consider the union of the British North American Colonies, on Prince Edward Island in September 1864. In the foreground are Sir John A. Macdonald (R) and Georges Etienne Cartier. (Public Domain)
Michael Zwaagstra

Judging by how some people describe him, John A. Macdonald was one of the most evil men in human history. Recently, protesters in Montreal tore down and beheaded his statue. Macdonald statues in other Canadian cities have also come under attack.

It’s not just statues that protesters wish to tear down. There is an organized campaign to rename buildings that bear Macdonald’s name. In fact, several years ago the Elementary Teachers’ Federation of Ontario called for his name to be stricken from all public schools in the province. A number of education professors have supported this proposal.

Macdonald’s critics argue that his role in establishing Indigenous residential schools and his openly racist views about Indigenous people disqualify him from any place of honour in Canada today. They want all his statues taken down and any buildings named after him to be renamed.

However, this is short-sighted reasoning that fails to consider Macdonald’s broader record. Not only was he the first prime minister of Canada, Macdonald played a key role in making sure Confederation took place. Had he not reached across the aisle to work with his political opponents, it’s likely that Canada as we know it would not exist today.

The Province of Canada, as it was then known, was not doing well in the 1860s. Not only was it under serious threat from American military aggression, Canada East (Quebec) and Canada West (Ontario) were locked in a perpetual political stalemate. Neither side could get anything done because the English and French routinely blocked any legislation proposed by the other side.

When Macdonald agreed to work with his political nemesis George Brown along with his French-Canadian counterpart Georges-Etienne Cartier, he set in motion a series of events that eventually led to Confederation in 1867. Macdonald pushed for including the Atlantic provinces in the constitutional negotiations and his foresight led to Nova Scotia and New Brunswick becoming two of the original Canadian provinces.

But his efforts didn’t stop there. Macdonald had a vision of Canada extending from sea to sea. To make this happen, he promised to build a railway to British Columbia within 10 years. It was this promise that convinced BC to join Canada in 1871. Had Macdonald not made this promise, it’s virtually certain that B.C. would have joined the United States instead.

At great political and financial cost, the last spike was driven in the Canadian Pacific Railway on Nov. 7, 1885. This railway still exists today, and not surprisingly, it still ties Canada together.

It’s important to note that these achievements did not take place in a vacuum. Throughout his political career, Macdonald faced serious personal hardships. For example, his first wife, Isabella, was chronically ill throughout most of their marriage until she passed away in 1857. And their first son died in infancy. Of course, these two tragedies affected Macdonald to a considerable degree. Nevertheless, he persisted.

Macdonald remarried in 1867. Two years later, his wife gave birth to their daughter, Mary. Sadly, shortly afterward Mary was diagnosed with hydrocephalus, a disability which rendered her largely immobile. No doubt this was another serious blow to the Macdonald family.

However, instead of following the normal practice of the time and sending Mary off to an institution, Macdonald insisted that she continue to live with them. He doted on her and for the rest of his life took a direct role in her personal care. This is the kind of man Macdonald was, yet people want to tear down his statues and rename buildings.

Throughout all of these personal hardships Macdonald helped bring Canada into existence and led the country through its formative years. Of course, given his turbulent private life, this required a significant amount of personal character and substantial fortitude on his part.

Even so, Macdonald was a deeply flawed man. He drank too much, took bribes from railroad companies, brazenly handed out plum patronage jobs to his political cronies, and caused great harm to many Indigenous people. These flaws cannot be ignored and Canadians need to know about them. But his flaws must be weighed against his accomplishments.

Had Macdonald been born a century later, perhaps he would have adopted a more enlightened Indigenous policy. We will never know for sure, but he certainly sounds like the sort of person who would be open to change, particularly if he knew then what we know now.

Instead of tearing down Macdonald’s statues and renaming buildings, we should honour Macdonald’s legacy while being honest about his flaws. This is why education is so important. Students need to learn the full history of our country, both good and bad.

Canada exists today largely because of John A. Macdonald. For that achievement alone, he deserves recognition.

Michael Zwaagstra is a public high school teacher, a senior fellow with the Frontier Centre for Public Policy, and author of A Sage on the Stage: Common Sense Reflections on Teaching and Learning.