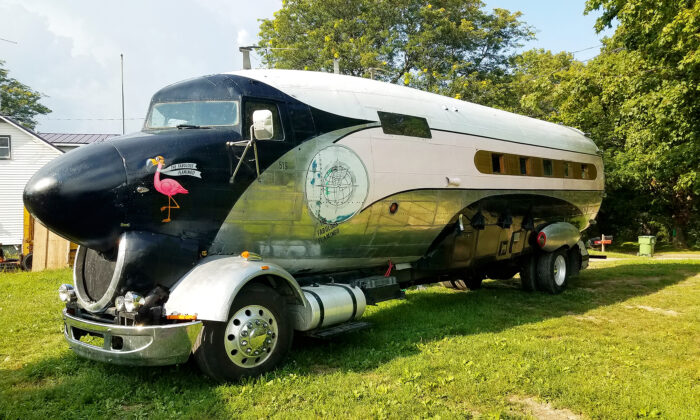 A former U.S. Air Force master sergeant has put his life’s work to use in a very unique renovation. Wanting to build himself a motor home, he repurposed an old World War II airplane into a functional, mobile living space, naming the 300-square-foot RV the “Fabulous Flamingo.”

As a child, Gino Lucci of Michigan watched his father and uncles build their own RVs. After becoming a pilot and aircraft mechanic, Lucci—who owns the airplane salvage company Round Engine Aero—decided he could build his own from a plane.

“It took about 40 years for that dream to become a reality,” Lucci told The Epoch Times via email.

In 2018, Lucci and his then-19-year-old son, Giacinto, teamed up to scout for raw materials. Searching satellite images, Giacinto came across the perfect aircraft at an airport in Rolla, Missouri: the 1943 model RD-4.

“It was part of a freight operation,” Lucci said. “A tornado had passed through about 30 years before and wrecked several airplanes. This was one of them.”

Lucci said this model had been used by the U.S. Navy as transport “throughout South America,” then sold to an airline at the end of World War II. From there, the Federal Aviation Administration (FAA) used it as a test plane, but it was damaged before it could be converted into a freighter.

“There’s a huge kink in the airframe,” Lucci said. “We later learned the fuselage was twisted and bent; a souvenir hunter had stripped many of the small parts, and animals had moved in.”

Yet Lucci and Giacinto were determined that this was the right aircraft for the job. However, it took the owner until May 2019 to agree to sell the craft.

Demating the plane from its wings, Lucci and his son transported the craft 600 miles away to their 5-acre farm in Nashville, Michigan, for renovation.

They gutted it down to the bare metal, then cleaned and prepped it for mounting onto the frame of an old delivery truck. The process took three months, but the father-son duo managed most of the work without heavy equipment.

“There was a fair amount of cutting, measuring, and making sure it would mount and ride properly,” Lucci told The Epoch Times.

“A sub-structure was built, and the tedious processes of making the truck and the aircraft ‘talk to each other’ and ‘work together’ were done.”

Lucci said this was one of the most major challenges. It was also tough to relocate the door, achieve forward visibility, and prepare the vehicle for life on the road.

“When you hit a pothole, it can really affect the airframe,” Lucci said.

“When we first started to test it, the airframe wanted to vane into the wind and would drag the chassis, so we loosened everything up and my son would measure the distance the airframe would move in relation to the chassis while driving at set speeds.”

The pair kept readjusting until the airframe didn’t move, then built saddles and supports to secure it in place.

Measuring 38 feet long, the finished RV can reach speeds of up to 70 mph. After innumerable safety inspections, it was declared a roadworthy “Class A” motor home.

Eighteen months after the project began, Lucci took the Fabulous Flamingo—named for the pink streaks down its sides—on its very first road trip.

The RV boasts a master bedroom in the back, two twin beds, a bathtub, a washroom with a sink and flushable toilet, a table that can fold down into a bed, and a sofa-cum-bed in the fashion of the sleeper berths of the 1940s.

The pilot’s radio rack was reutilized in the kitchen, the aircraft’s engine cowlings became the RV’s front fenders, and the wing-tip fuel tanks became the rear. Even the original intercom system still works.

Lucci claims it’s easy to see how many original plane parts have been repurposed.

“When I look at the pictures from the beginning, I cannot believe that my son and I actually built it,” Lucci said. “I loved the mental challenge, figuring out how to do things. Plus I like that we had little-to-no help with the construction.”

The 25-year Air Force veteran, however, credited the Michigan-based company Frontier Truck Parts for providing 23 semi-truck cabs’ worth of insulation. They also gave Lucci and his son free rein to tear apart disused cabs to explore how things were put together.

“In reality, the project would not turn out as well as it did without their support,” he said.

Besides using the Flamingo for vacations, Lucci says it’s “very touching” to bring veterans into the cockpit to “relive their youth.”

“Money-wise, I am not wealthy at all,” he said. “It is so much fun to see the excitement that people have when we pull up.”

Lucci and his son continue to make improvements, repurposing parts from the original aircraft wherever possible to keep costs down. They even drove the RV back to Baron Aviation to show the owner what had become of his decommissioned plane.

Blown away, he sold them two more planes, including one that flew in D-Day.