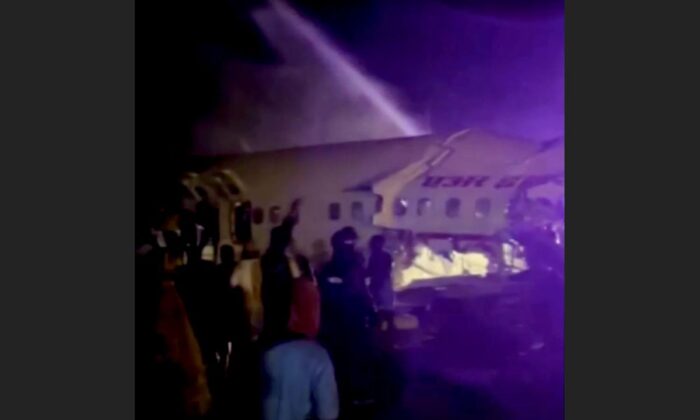 A passenger plane that crashed after it overshot the runway is seen at Calicut International Airport in Karipur, southern state of Kerala, India, August 7, 2020, in this still image obtained from a video. (ANI/Reuters TV/via REUTERS)

Later Update: At least 16 people have reportedly died in the crash-landing, officials said in an update. Both pilots are also reportedly dead.

An Air India Express flight with 191 passengers on board overshot a runway while it was landing in Kozhikode, India, on Friday.

“A Dubai-Kozhikode Air India Express flight fell down into the valley after landing at Runway 10 of Karipur Airport & broke down in two pieces,” said the Directorate General of Civil Aviation. “There were 191 people on board. Visibility was 2000 meter at the time of landing,” the agency said, according to Livemint.

The agency said that the plane, Air India Flight IX-1344 “skidded during landing at Karipur Airport at around 7:45 p.m. today,” adding that it will investigate the matter.

Officials “have instructed Police and Fire Force to take urgent action in the wake of the plane crash at the Kozhikode International airport in Karipur,” Kerala chief minister Pinarayi Vijayan wrote on Twitter. He announced that he “also directed the officials to make necessary arrangements for rescue and medical support.”

Photos from the scene that were posted on social media showed that the plane appeared to have broken into two pieces.

The plane was heading from Dubai in the United Arab Emirates to India.

According to ANI, there were six crew members on board in addition to passengers.

The crash took place in the midst of heavy rains in the area at around 7 p.m., NDTV reported. Kerala State has been impacted by the rains over the past week, triggering landslides that killed at least 15 people.