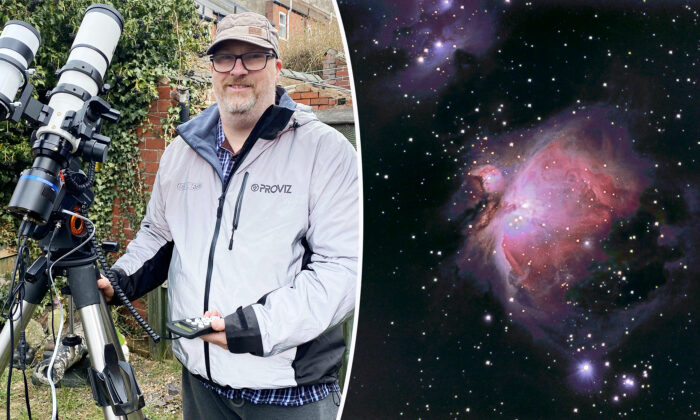 An amateur astronomer has taken some incredible photos of space 1,350 light years away—from his back garden.

Russell Atkin, 52, took up astronomy eight years ago, but has been forced to stargaze closer from home this year.

He’s traveled all over the world in a bid to get views unspoiled by light pollution, but his best pics yet have been taken recently from his back garden, in Sheffield, South Yorkshire.

The pictures show the stunning Pleiades star cluster and the famous Orion Nebula, as well as the Andromeda galaxy, the nearest major galaxy to the Milky Way.

His snaps capture light emitted from stars before Joan of Arc or the Vikings discovered Greenland.

Russell said: “I think what a lot of people don’t realize is that you don’t need a fancy observatory at the top of a mountain—you can see so many incredible things from your own back garden.

“Some people just accuse me of lying because there is ‘no way I could have taken them’—but I did, so that’s a compliment more than anything else!

“I feel very proud to have taken photographs of such amazing sights from my own back garden.

“Astronomy has always fascinated me—and in the past eight years I’ve gone from reading about it in books to taking these photographs for myself.

“When the camera shutter closes and I get to see the photograph I’ve just taken, it’s the most incredible thing—sometimes my jaw just drops at the pictures.

“When people see my photos, they can’t believe I took them from my own back garden in Sheffield—it’s amazing what you can see through a good telescope.”

Russell said he has been fascinated by stars and planets since childhood and has photographed a range of incredible sights using his high-tech telescopes.

He joined his local astronomical society and began learning more about the universe and teaching himself the technical processes of space photography.

His technique involves layering up to 30 long-exposure images on top of each other, to create his striking photographs.

A tracked mount keeps the stars and galaxies in the center of the frame by moving the camera against the Earth’s rotation.

He has to sit outside in his garden in the dark in a heated coat with a hot flask for hours—but said the end result is worth it.

He explained: “I think the enormity of space makes some people feel insignificant, but I have a completely different philosophy—when I stare at the sky it makes me wonder what else is out there.

“We’ll probably never know exactly what’s out there—but that’s why I love it.”