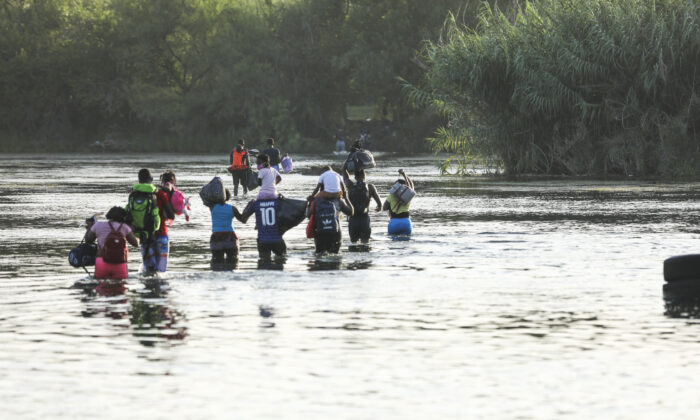 In the normally peaceful desert town of Gila Bend, nestled 100 miles north of Arizona’s border with Mexico, illegal aliens have been arriving daily since the town declared a state of emergency in March.

The illegal immigrants have all been on foot, and all appeared to be bound for parts unknown, carrying with them only their backpacks and the clothes they had on.

“What we are literally getting is a flood of migrants walking into town,” said Gila Bend Mayor Chris Riggs, who requested that a state of emergency be declared when a busload of 30 migrants was dropped off without any warning by the U.S. Border Patrol.

Riggs said the arrival of the bus came as a shock—not just to the city’s 1,900 residents—but to municipal resources already stretched thin by the economic impact of the CCP virus pandemic.

“We had no way of getting these people anywhere,” Riggs told The Epoch Times.

When Riggs and the Gila Bend City Council unanimously declared a state of emergency, the buses stopped coming, at least “for the time being,” Riggs said.

But the illegal immigrants continue to arrive nonstop, mostly on foot.

Each day, Riggs estimates that between 30 and 40 illegal aliens of various nationalities will walk into the city from the nearby southern town of Ajo.

Many were most likely processed at a federal detention facility located further south in the town of Why, Arizona, and then released.

Riggs said that a number of the immigrants appear to be families, while “most are adults of military age.”

“A lot of them are catching rides along Maricopa Road [in Gila Bend]. We’re seeing a lot more drug activity now than we did in the past,” he said.

In recent months, property crimes have tripled, and one reported armed robbery involved two immigrants who claimed to have a gun, he said.

When it comes to confronting illegal immigrants, law enforcement officials’ hands are tied by the federal government. Lacking its own police department, Gila Bend has a contract with the Maricopa County Sheriff’s Department to provide law enforcement coverage.

As a workaround, Gila Bend hired Paloma Security to confront illegal immigrants and deter crime, a situation that is proving “frustrating” to residents.

Riggs said that among the groups, a number appear to be unaccompanied minors, which raises the specter of child trafficking.

According to Jessica Vaughan, director of policy studies for the Center for Immigration Studies, it’s “definitely taxpayer money and federal dollars” fueling the latest surge in border crossings and the alien resettlement program.

“They’re trying to just turn them over quickly and process them quickly,” Vaughan said. “Most of them that show up have a destination but no idea how to get there. The buck stops at the state and local government. They have to pick up the pieces.”

In February, the U.S. Border Patrol apprehended nearly 100,000 migrants at the U.S.–Mexico Border, though illegal crossings continue to surge.

Arizona state Rep. Mark Finchem, a Republican, said he can speak “firsthand” to the fact that unaccompanied minors are being transported across the United States at taxpayer expense.

“On my morning flight from Phoenix to Charlotte [N.C.] a week ago this past Sunday, there were three unaccompanied Hispanic minors,” Finchem told The Epoch Times. “Each had a white paper document hung around their neck, not the document one usually sees with American Airlines for unaccompanied minors. The document said, ‘Passage Document, U.S. Department of —.’ I could not make out the department since the document was folded.

“I had no idea where they were going.”

An email to American Airlines requesting comment was not returned.

Riggs said that none of the immigrants that he’s seen were wearing masks. There have also been reports of immigrants being dropped off in vehicles near Gila Bend’s senior center.

In the aftermath of the town’s declared state of emergency, Riggs has called upon state and federal officials to help the city handle its immigration crisis given its lack of resources.

To date, only Sens. Kyrsten Sinema and Mark Kelly, both Arizona Democrats, have stepped up to offer help to stem the influx, he said.

“It’s a nightmare,” Riggs said, adding that the local cost of illegal migration is mounting.

Gila Bend officials are also weighing the cost of establishing a town police department to “start enforcing trespass laws—if nothing else,” he said.