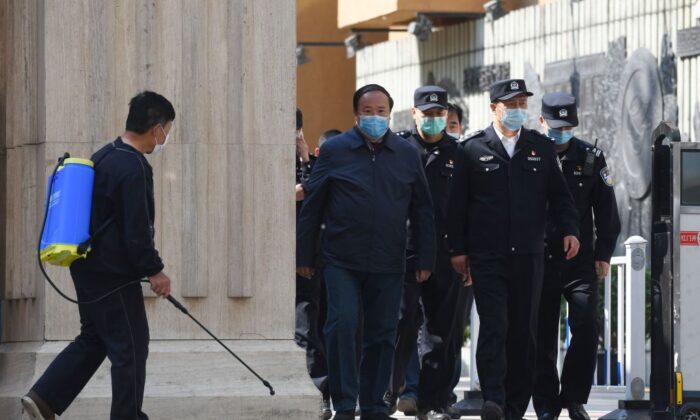 Police and officials emerge from a high school as a man (L) disinfects the entrance in Beijing on April 27, 2020. (Greg Baker/AFP via Getty Images)
BY MARY HONG

Authorities in Beijing claim that the latest wave outbreak is under control, but internal data obtained by The Epoch Times tells a different story: one hospital’s number of confirmed cases exceeded the officially reported cases for the entire city.

The Epoch Times received numerous internal CCP virus reports from the Beijing Ditan Hospital, which were reported to the Beijing Health Commission.

Among them are daily nucleic acid testing results. According to the June 19 data, a total of 800 test samples were performed on 773 people. 246 tested positive and had been hospitalized between 10 p.m. June 18 and 10 p.m. June 19.

The report indicates that within those 24 hours, Beijing Ditan Hospital alone admitted at least 246 confirmed CCP virus patients. This number does not include patients that were admitted earlier.

However, the Beijing Health Commission reported the total number of confirmed and hospitalized cases on June 19, 20, and 21 in the entire city were 205, 227 and 236, respectively.

The data from Ditan Hospital suggests that the real number of cases could be many times higher than what is being officially reported.

In dealing with the pandemic, Beijing set up 79 fever clinics, including six by the army. According to a June 14 press conference by the Beijing Health Commission, fever clinics serve as outposts for containing the pandemic, and no patient should be refused medical help. Patients can take a COVID-19 nucleic acid test, COVID-19 antibody test, CT scan, and routine blood test there. Ditan Hospital also has a fever clinic within its facility.

Among the documents obtained by The Epoch Times is a compilation of fever patients’ test results from the fever clinic of Ditan Hospital, dated June 17. The data shows that 288 patients visited the clinic that day and 26 of them tested positive.

However, the city Health Commission reported only 21 newly confirmed cases on June 17 for all of Beijing.

One fever clinic alone detected more new cases that day than what was officially declared by the Health Commission.

According to a June 15 report by state-run media Xinhua, authorities amped up prevention efforts across the board in Beijing. Surveillance will be conducted at all security checkpoints 24/7, with 100,000 personnel mobilized to contain the pandemic, according to the report.