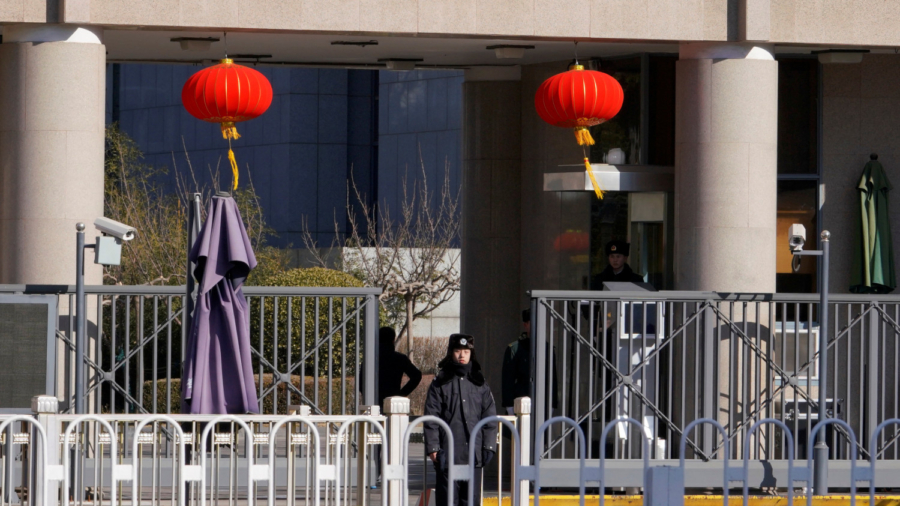 Security personnel stand guard at headquarters of the Central Commission for Discipline Inspection of the Communist Party of China in Beijing on Feb. 10, 2018. (Jason Lee/Reuters)

Chinese tycoon and princeling Ren Zhiqiang is now under investigation by the Communist Party, following his disappearance in mid-March.

Ren, 69, is suspected of “serious violations of Party discipline and the law,” said the Beijing municipal branch of the Central Commission for Discipline Inspection (CCDI), an internal Party anti-corruption watchdog, in an online announcement on April 7.

The CCDI added that Ren is currently under “disciplinary review and supervision investigation” by the agency’s regional branch in the Xicheng district of Beijing.

The agency did not provide further details about Ren’s alleged wrongdoing, but the turn-of-phrase is an oft-used euphemism for corruption. Many Chinese Communist Party (CCP) officials sentenced in recent years were charged with disciplinary violations before formal court proceedings.

Ren is a real estate tycoon in Beijing and the son of former deputy minister of commerce Ren Quansheng. As a child of a former senior CCP official, Ren is considered a Party princeling.

After he went missing on March 12, China observers speculated that he was in Beijing’s crosshairs. Most recently, in March, he wrote an online article criticizing the regime for lying to the public about the spread of the CCP virus, commonly known as novel coronavirus.

His article also lashed out at Chinese leader Xi Jinping, calling him “a clown who insists on being an emperor.”

China analysts also said his month-long disappearance hinted that factional infighting within the CCP was intensifying.

The investigation against Ren is politically significant, according to U.S.-based China affairs commentator Tang Jingyuan.

In a tweet on April 7, Tang wrote that the investigation signaled the end of any possible reform the CCP may undertake.

Tang explained that former Party leader Deng Xiaoping once said, “hide your strength, bide your time,” a strategy of stealthily pursuing the Party’s goals. In recent years, some Party officials have criticized Xi for being too aggressive with pushing Beijing’s agenda and thus threatening the Party’s stability.

“Any hope of returning to Deng Xiaoping’s style” was shattered with the news of Ren’s investigation, Tang said.

He added that the investigation showed that princelings would not be immune to Party punishment—if they held opinions that stray from the Party line.

The source also told Apple Daily that Cai has also decided to investigate others who have issued public letters demanding those responsible for the epidemic to be held accountable.

Fears Swell as Beijing Signals It Could Send...