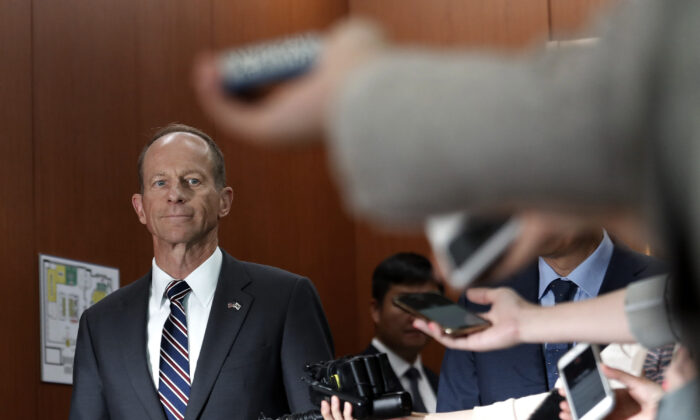 U.S. Assistant Secretary of State for the Bureau of East Asian and Pacific Affairs David Stilwell (L) arrives after a meeting with South Korean Foreign Minister Kang Kyung-wha (not pictured) at the foreign ministry in Seoul on July 17, 2019. (Ahn Young-Joon/AFP via Getty Images)
BY CATHY HE

The regime “wants control, or at least veto power, over public discourse and political decisions the world over,” David Stilwell, assistant secretary of state for East Asian and Pacific affairs, said at a virtual discussion hosted by Stanford’s Hoover Institution on Oct. 30.

It does this through a wide array of malign activities that are “covert, coercive, and corrupting,” he said. These activities are dubbed by the CCP as “United Front work” but better understood in the West as political warfare, Stilwell added.

United Front work, described by Party leaders as a “magic weapon,” involves the efforts of thousands of overseas groups that carry out political influence operations, suppress dissident movements, gather intelligence, and facilitate the transfer of technology to China. These groups are coordinated by the Party agency, the United Front Work Department (UFWD).

A recent investigation by Newsweek found about 600 such groups in the United States. Stilwell said the groups include Beijing-backed Confucius Institutes that sit on dozens of American college campuses, Chinese students and scholars associations, private Chinese companies, and other groups working to co-opt state and local governments.

“All told, we face a large and deliberately opaque amalgam of Chinese Communist Party officials, agents, and cutouts seeking advantage in our societies,” he said.

This year, the Trump administration has designated a range of CCP-controlled bodies as foreign missions of China in recognition of their roles doing Beijing’s bidding in the United States. Most recently, the state department designated a United Front group, the National Association for China’s Peaceful Unification, as a foreign mission. The Confucius Institute U.S. Center and 15 state-controlled media outlets have also been designated.

The justice department, meanwhile, has also cracked down on a range of malign actions sanctioned by the CCP from intellectual property theft to spying. In September, an NYPD officer Baimadajie Angwang was arrested, accused of spying for the regime. Prosecutors alleged Angwang fed intelligence about the local Tibetan community to his handler at the Chinese consulate who was assigned to the UFWD division, the China Association for Preservation and Development of Tibetan Culture.

Stilwell said seeking reciprocity is a “fundamental step” to “protect our own societies from being transformed by Beijing.”

“We allowed the Chinese Communist Party access to our society that it never extended to us,” he said, including in the areas of diplomacy, education, trade, investment, and science and technology.

The official implored other countries to follow the United States’s actions “to insist on reciprocity, transparency and accountability from the Chinese Communist Party.”

Stilwell added: “The Chinese Communist Party poses a real risk to our basic way of life—prosperity, security, and liberty all. Our task is to recognize it, alert others, and together take the steps needed to defend our freedoms.”