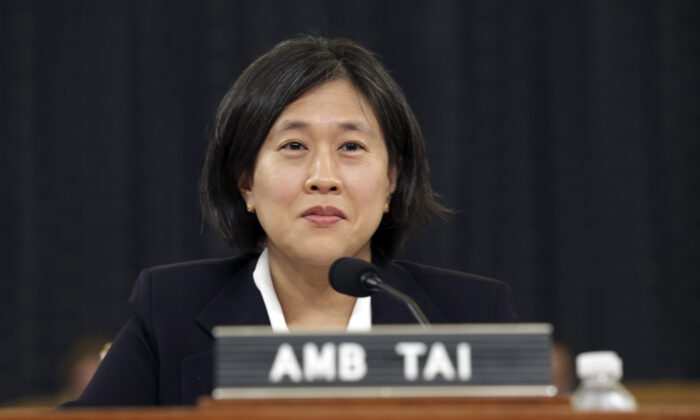 One of the highest priorities of the Biden administration’s trade agenda is resetting the U.S.-China trade relationship with a view to putting American farmers and exporters on a level playing field with their Chinese counterparts, U.S. Trade Representative Katherine Tai said on March 30.

In a prepared statement before a House Ways & Means Committee hearing, Tai criticized the prominent role of state-owned enterprises in China’s imports and exports as well as “labor rights suppression, a weak environmental regime, [and] other distortions that put market-oriented participants out of business.”

She also noted Beijing’s failure to meet purchase commitments under the “phase one” trade agreement signed in January 2020. Those purchase agreements stipulated that China would import at least $200 million more of U.S. goods and products in 2020-2021 than the country bought in 2017.

“We absolutely need to enforce all our agreements, phase one included, and that’s why we’ve spent the last several months fighting for our farmers who have a lot at stake in the purchase agreements,” Tai said during the hearing.

U.S. concerns about Beijing’s abusive trade practices led Tai and her team in October 2021 to initiate a dialogue with the Chinese regime, emphasizing the importance of meeting phase one obligations, she said in the statement.

But it became clear to Washington that Beijing did not consider the agreement to be binding and met only those commitments that the regime felt served its own interests, the statement said. Tai called this cherry-picking when it comes to meeting obligations a “familiar pattern” that U.S. officials encounter when dealing with Chinese regime officials, whether in the context of the World Trade Organization or bilateral talks.

While these experiences have not completely turned Washington off to the possibility of dialogue with Beijing, she said, it is clear that the old approach by itself is insufficient.

To that end, Tai urged Congress to pass the America COMPETES Act, a bill aimed at expanding semiconductor manufacturing in the United States and curbing reliance on Chinese products and know-how.

The trade official also emphasized that the Biden administration has forcefully demonstrated to the Chinese regime the resolve of the United States to enforce the Uyghur Forced Labor Prevention Act, which banned the importation of all products from China’s Xinjiang over Uyghur forced labor concerns.

“The challenge that we face from China is significant and it goes to how we as the U.S. continue to be able to compete and have thriving industries,” Tai told the lawmakers.

Michael Washburn
China Reporter
Michael Washburn is a New York-based reporter who covers China-related topics. He has a background in legal and financial journalism, and also writes about arts and culture. Additionally, he is the host of the weekly podcast Reading the Globe. His books include “The Uprooted and Other Stories,” “When We’re Grownups,” and “Stranger, Stranger.”
Source
US-CHINA RELATIONS
Share
0
FacebookTwitterLinkedinRedditWhatsappEmail