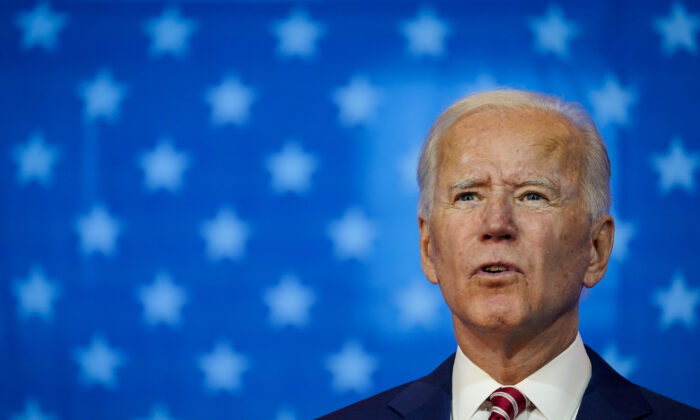 Biden, with his wife, Jill, sitting beside him, told event moderators George Lopez and CNN analyst Ana Navarro that, “this is  the most consequential election in a long, long, long time.”

“The character of the country, in my view, is literally on the ballot, what kind of country we’re going to be,” Biden continued, adding, “Four more years of George, ah, George… we’re going to find ourselves in a position where if Trump gets elected, we’re going to be in a different world.”

Trump seized on Biden’s gaffe, writing on Twitter Monday: “Joe Biden called me George yesterday. Couldn’t remember my name. Got some help from the anchor to get him through the interview. The Fake News Cartel is working overtime to cover it up!”

Biden’s flub is one of a series he has made during his presidential campaign, including a recent misstatement made during an interview on “Pod Save America,” during which he said Democrats have put together a “voter fraud organization.”

“We’re in a situation where we have put together—and you guys did it for our admi … the president, Obama’s administration before this—we have put together, I think, the most extensive and inclusive voter fraud organization in the history of American politics,” Biden said in a video that began circulating on social media on Saturday. Biden was likely referring to his campaign’s “election protection program.”

“What the president is trying to do is discourage people from voting by implying that their vote won’t be counted, it can’t be counted, we’re gonna challenge it, and all these things. If enough people vote, it’s going to overwhelm the system” Biden went on to say, and urged people to call a number if they have difficulties voting. “Call that number. We have over a thousand lawyers,” Biden said.

Trump retweeted the video on Sunday, with the comment: “What a terrible thing for Biden to say! Rigged Election?”

The president has repeatedly expressed concern that the massive expansion in mail-in balloting during this year’s general election carries a higher risk of voter fraud.

Both the Trump and Biden campaigns have assembled teams of lawyers for the possibility that the race for the White House ends up being adjudicated in court.

Attorneys for the Republicans and the Democrats have already clashed in courts across the country over mail-in ballot deadlines and other issues.

Both sides are informed by the experience of the 2000 election, which was ultimately decided by the Supreme Court.