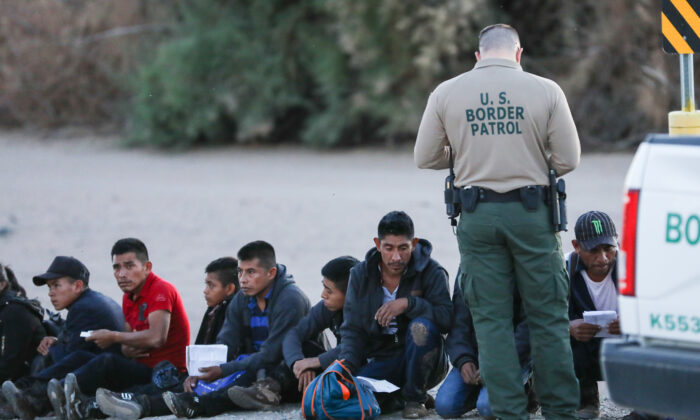 A group of illegal aliens is apprehended by Border Patrol after crossing from Mexico into Yuma, Ariz., on April 12, 2019. (Charlotte Cuthbertson/The Epoch Times)

WASHINGTON—The Biden administration has been swift to bring its immigration and border security pledges to fruition in the White House.

White House press secretary Jen Psaki said during a Jan. 21 briefing that, “Immigration, we consider, is part of racial equity—which is a broad issue, but that’s how the president has spoken about that crisis over the past several months.”

Psaki said President Joe Biden is focused on addressing four crises, including getting the pandemic under control, getting people back to work, the climate, and racial equity.

Biden’s actions took place as a caravan of 9,000 Hondurans clashed with the Guatemalan army in a border province.

The change that will likely have the biggest impact on border security and illegal crossings is Homeland Security’s order to stop adding illegal immigrants to the Migrant Protection Protocol (MPP) program, also known as “Remain in Mexico.”

The MPP program makes asylum-seekers wait in Mexico while their asylum case is adjudicated.

The program has been touted as a breakthrough in stopping the phenomenon of “catch-and-release,” in which hundreds of thousands of illegal immigrants claimed asylum upon entry into the United States. Before the Remain in Mexico program was implemented, those individuals, regardless of the merits of their asylum claim, would be quickly released into the United States with a court hearing often scheduled for years down the track, at which most failed to turn up.

The “catch-and-release” phenomenon was a major driver of the caravans and border crisis of 2019 when 1 million illegal immigrants entered the United States over the southern border.

Trump introduced MPP late in 2019, which was expanded across the southern border and now results in 90 percent of illegal border-crossers either being quickly deported, or being sent back to Mexico to await their asylum claim. The effect has been fewer illegal crossings and fewer meritless asylum claims.

Biden signed an executive order hours after his inauguration that terminated the emergency declaration on the southern border and put an immediate halt on border wall construction.

“It shall be the policy of my Administration that no more American taxpayer dollars be diverted to construct a border wall,” the executive order states. “I am also directing a careful review of all resources appropriated or redirected to construct a southern border wall.”

Alejandro Mayorkas, Biden’s pick to head the Department of Homeland Security (DHS), said he hasn’t looked at what he’d do with the current border wall, including the possibility of removing portions of it.

“I look forward to studying that question, understand the costs and benefits of doing so,” he told the Senate Committee on Homeland Security and Governmental Affairs during his confirmation hearing on Jan. 19.

Congress recently appropriated $1.4 billion for border wall construction in the 2021 National Defense Authorization package, which Mayorkas said he would examine to “see what the opportunities are to discontinue any such obligation, if in fact, the law permits, and act accordingly.”

Mayorkas served as head of U.S. Citizenship and Immigration Services during President Barack Obama’s first term and then deputy secretary of the Department of Homeland Security during his second term.

During the Trump administration, more than 450 miles of border fencing were constructed along the U.S.–Mexico border, much of which has replaced old or ineffective barriers.

The council’s president, Brandon Judd, has said border agents are grateful for the new fencing, which comes with access roads, lighting, and technology.

Also on day one, Biden took executive action to revoke a travel ban that Trump had placed on several terror-prone countries that had consistently failed to provide “terrorist, criminal, or identity information” for their travelers.

Biden called the ban discriminatory against both Muslims and African nations and “a stain on our national conscience.”

The countries on the travel ban list were Eritrea, Iran, Kyrgyzstan, Libya, Myanmar, Nigeria, North Korea, Somalia, Sudan, Syria, Tanzania, Venezuela, and Yemen. Each nation had tailored restrictions. Countries such as Somalia, for example, have had no government for decades to issue basic documents such as birth certificates and driver licenses, making it impossible to vet travelers.

Under Trump, the DHS reviewed almost 200 countries between March and July 2017 to identify those that needed to provide more information with visa applications to satisfy U.S. authorities that the individual is not a security or public-safety threat.

One criterion was document integrity—for example, whether a country issued passports with an embedded chip or not, or whether the country could provide evidence that their citizens are who they say they are.

Other criteria include whether the country is a known or potential terrorist safe haven; whether it is a participant in the Visa Waiver Program; and whether it regularly fails to receive its nationals who are subject to orders of removal from the United States.

The department then spent 7 weeks working with countries to help them meet the criteria.

In September 2017, Trump issued a proclamation modifying his original order, which, after a legal battle, was upheld by the U.S. Supreme Court.

Biden’s order requires the State Department to make a plan to review the visa applications that had been denied during the duration of the Trump administration’s travel ban.

Another Jan. 20 executive order ordered the DHS to continue the DACA program, which Trump rescinded in September 2017, calling it executive overreach and asking Congress to grant a pathway to citizenship for recipients.

“I have a love for these people, and hopefully now Congress will be able to help them and do it properly,” Trump said at the time.

Congress is yet to provide a permanent solution and the program has been the subject of court wrangling ever since.

DACA was introduced through an executive order by former President Barack Obama in 2012 as a temporary measure that gave recipients a renewable, two-year reprieve from deportation, as well as work authorization and access to social security.

Since its inception, around 800,000 illegal immigrants have been enrolled in the program.

DACA recipients must have arrived in the country illegally before their 16th birthday and must have been under 31 when they applied for DACA status, among other criteria.

The average age of DACA recipients is over 25 and those at the maximum age are now 39. Eighty-one percent of the recipients are Mexican, but some come from countries as far flung as Pakistan and the Philippines.

Only a few randomly selected DACA recipients were vetted through background checks during the original intake, and by 2018, more than 2,100 recipients had since had their eligibility rescinded due to criminal convictions and gang activity, according to the DHS.

The Congressional Budget Office ran a cost estimate of a pathway to citizenship for a slightly expanded DACA cohort in response to the introduction of the DREAM Act in July 2017.

The bill was introduced to the Senate by Sen. Lindsey Graham (R-S.C.) and the DREAM stands for Development, Relief, and Education for Alien Minors.

The CBO estimated that 3.25 million illegal aliens met the basic eligibility criteria, but, based on DACA application rates, about 2 million would apply and be approved.

Using that calculation, the CBO estimated that the DREAM Act would have generated a net cost of $26 billion over the ensuing 10 years.

Most DACA recipients currently pay most taxes, but cannot receive most federal benefits. The DREAM Act would have generated about $1 billion in extra tax revenue, but recipients would have received about $27 billion in new benefits, such as Obamacare subsidies, child tax credits, Medicaid, and food stamps.

Beyond the DACA population, Biden has promised an amnesty and pathway to citizenship to the illegal immigrants currently residing in the United States—an estimated 11 million to 25 million people.

He also supports free health care for illegal immigrants. Biden said he will reverse Trump’s public charge rule, which currently prohibits non-U.S. citizens and permanent residents from accessing food stamps and other welfare benefits. He also states he would give Green Cards to foreign students who obtain a doctoral degree in the United States.

In the event of an amnesty, studies predict that at least six times the original number of eligible individuals would become citizens, based on chain migration, in which citizens can bring in family members.

The Center for Immigration Studies issued a report showing that each new legal Mexican immigrant, for example, sponsored 6.38 additional legal immigrants, based on the 1996 to 2000 cohort of immigrants.

The DHS on Jan. 21 issued a memo to suspend deportations of illegal aliens for 100 days, with the exception of those who have “either engaged in or are suspected of terrorism or espionage.”

DHS acting secretary David Pekoske said that instead, the department will surge resources to the southern border “as it is confronting the most serious global public health crisis in a century. Biden has tapped Pekoske as acting secretary until Mayorkas is confirmed by the Senate.

“In light of those unique circumstances, the Department must surge resources to the border in order to ensure safe, legal, and orderly processing, to rebuild fair and effective asylum procedures that respect human rights and due process, to adopt appropriate public health guidelines and protocols, and to prioritize responding to threats to national security, public safety, and border security,” Pekoske said.

The memo said the department can’t respond to all immigration violations or remove all persons unlawfully in the United States, and it intends to prioritize terror threats, illegal immigrants who entered the United States from Nov. 1, 2020, and those who have been convicted of an aggravated felony who are deemed a public safety threat.

On Jan. 22, the state of Texas sued the Biden administration over the action.

In the suit, Texas Attorney General Ken Paxton, asks the federal court to declare Pekoske’s memo unlawful and to block the defendants from executing the order.

“On its first day in office, the Biden Administration cast aside congressionally enacted immigration laws and suspended the removal of illegal aliens whose removal is compelled by those very laws,” the lawsuit states. “In doing so, it ignored basic constitutional principles and violated its written pledge to work cooperatively with the State of Texas to address shared immigration enforcement concerns. This unlawful reversal will cause Texas immediate and irreparable harm if it is not enjoined.”

Immigration and Customs Enforcement (ICE), the agency tasked with interior enforcement, as well as investigations into child sex trafficking and other crimes, has for years prioritized the removal of criminal aliens.

In fiscal 2020, ICE’s Enforcement and Removal Operations conducted almost 186,000 removals, of which 92 percent had criminal convictions or pending criminal charges, according to ICE’s end of year report.

ICE also conducted more than 103,000 interior arrests—just under 30 percent fewer than fiscal 2019 due to COVID-19 restrictions.

Approximately 90 percent of those arrested had a criminal conviction or charge, according to the report. Those arrested included aliens with criminal charges or convictions for 1,837 homicide offenses, 37,247 assault offenses, and 10,302 sexual assault or sex offenses.

In a call with Mexico’s president Andrés Manuel López Obrador on Jan. 23, Biden said his plan included “increasing resettlement capacity and lawful alternative immigration pathways,” as well as improved processing at the border for asylum-seekers.

Biden on Jan. 20 signed an executive order to include illegal aliens in the census-based apportionment of federal funding and congressional representation.

The president also unveiled a sweeping immigration reform package for Congress, which includes a mass amnesty, the broadening of asylum criteria, an increase in refugee admissions, and more federal programs for immigrants.

It also promised a $4 billion four-year inter-agency plan to address “the underlying causes of migration in the region,” including by increasing assistance to El Salvador, Guatemala, and Honduras.

Ivan Pentchoukov contributed to this report.