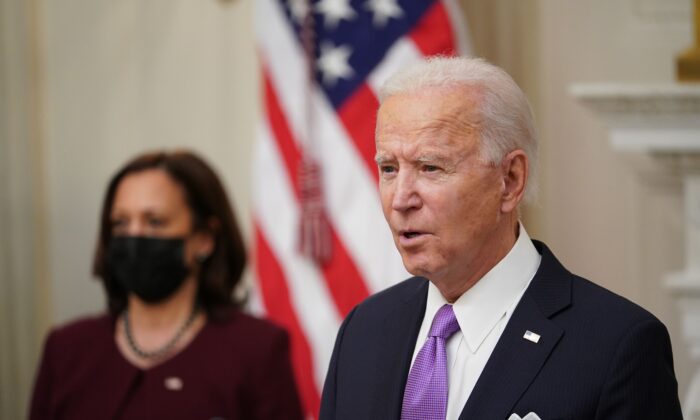 President Joe Biden speaks about the Covid-19 response as Vice President Kamala Harris (L) looks on before signing executive orders in the State Dining Room of the White House in Washington on Jan. 21, 2021. (Mandel Ngan/AFP via Getty Images)

The Biden administration will re-impose a travel ban on most non-American citizens entering the country from the UK, most European countries, and Brazil. South Africa will also be added to the list, said White House press secretary Jen Psaki.

The move is designed to “reduce the spread of COVID-19 through travel,” said Psaki, “especially as we see faster-spreading variants emerging across the world.”

Last year, scientists in the UK discovered a new variant of CCP virus, the novel coronavirus that causes COVID-19, which is believed to spread faster than the original one that emerged in 2019 in mainland China. Officials have also sounded the alarm about a strain of the CCP virus that emerged recently in South Africa.

“We are adding South Africa to the restricted list because of the concerning variant present that has already spread beyond South Africa,” said Dr. Anne Schuchat, the U.S. Centers for Disease Control and Prevention (CDC)’s principal deputy director, in a Reuters interview on Sunday.

The CDC is “putting in place this suite of measures to protect Americans and also to reduce the risk of these variants spreading and worsening the current pandemic,” Schuchat added.

Recently, the CDC determined that South Africa is “experiencing widespread, ongoing person-to-person transmission” of the B.1.351 strain of the virus, while Brazil has its own variant known as B.1.1.28.1, according to a proclamation from Biden on the White House website, which listed exemptions to the travel rule.

All passengers entering the United States will have to clear a CCP virus test that must be administered no more than 72 hours prior to the scheduled departure time to the United States, according to Psaki.

In addition to most of Europe, Brazil, and South Africa, the U.S. is also restricting travel from China and Iran.

UK Prime Minister Boris Johnson on Jan. 22 said there is evidence the B.1.1.7 variant found last year in England is associated with a higher mortality rate.

“We’ve been informed today that in addition to spreading more quickly, it also now appears that there is some evidence that the new variant—the variant that was first discovered in London and the southeast [in England]—may be associated with a higher degree of mortality,” he said in a news conference on Friday. The variant, he said, could be up to 30 percent more deadly than the original CCP virus.

The UK variant has been discovered in around a dozen U.S. states so far, including New York, Illinois, and California.

Earlier in January, Health Secretary Matt Hancock told the BBC the variant found in South Africa may pose more of a problem.

“I’m incredibly worried about the South African variant, and that’s why we took the action that we did to restrict all flights from South Africa,” he said, adding: “This is a very, very significant problem … and it’s even more of a problem than the U.K. new variant.”