Canada Should ‘Adopt a Much Firmer Attitude With China’: Former Ambassador 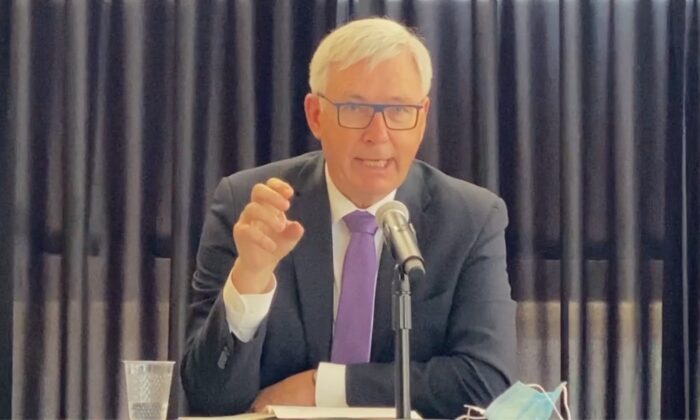 Former Canadian ambassador to China Guy St-Jacques speaks at a panel discussion during a forum on the challenges posed by China to the international community, at the University of Ottawa in Ottawa on June 3, 2022. (Limiin Zhou/EpochTimes)

Canada should be much firmer in its dealings with communist China, says a former ambassador to that country.

Guy St-Jacques, Canada’s envoy to China from 2012 to 2016, made the comments in his speech during a panel discussion at “The Challenge of China” conference at the University of Ottawa on June 3.

“It is high time for the government to adopt a much firmer attitude with China. It’s the only language that China respects. It calls for concerted action [that] has to take place among like-minded democracies to counter China,” said St-Jacques.

“China feels emboldened with its wolf warrior type of diplomacy, and feels that it is winning today,” he added, noting that “China’s approach to international law is like it’s a menu—we take some things, we don’t take others.”

St-Jacques said it remains difficult to do business in communist China. “It has not delivered on all the promises it made when it entered the WTO [World Trade Organization] in 2001, and it keeps favouring its [own] companies, especially state-owned enterprises. Add to this, its use of trade as a weapon,” he said.

He cited an article by the Australian Strategic Policy Institute, which found that the Chinese regime had used coercive diplomacy tactics 152 times against 27 countries and the European Union between 2010 and 2020.

“These actions illustrate, in my view, how insecure a country China is,” St. Jacques said.

St. Jacques said that prior to the Meng Wanzhou affair, which led to the Chinese regime’s arbitrary detention of Canadians Michael Spavor and Michael Kovrig in 2018, some individuals within the government didn’t want to recognize the regime as “an aggressive bully that threatens our values.”

Even now, he said he is uncertain that the “naivety toward China came to end” in the aftermath.

In December 2018, Canada arrested Meng Wanzhou, the chief financial officer of Chinese telecom giant Huawei, at the Vancouver International Airport on a provisional U.S. extradition request. She was charged the next month with fraud and conspiracy to commit fraud for allegedly lying to a financial institution about Huawei’s relationship with its Iranian subsidiary Skycom in order to circumvent American sanctions against Iran.

Days later, the Chinese regime detained businessman Spavor and former diplomat Kovrig in a move widely viewed as retaliation and part of Beijing’s “hostage diplomacy” to pressure Canada to release Meng. In May 2019, Chinese authorities formally charged the two Canadians with spying.

In September 2021, the two men were released and flew back to Canada while Meng was released and flew back to China, after Meng reached a deferred prosecution agreement with the U.S. Attorney’s Office. In the agreement, Meng admitted to having committed fraud in her dealings with HSBC bank, during which she concealed Huawei’s business in Iran through its control of Skycom.

Co-panellist Steve Chase, a senior parliamentary reporter for The Globe and Mail, said that he wished to talk about the extent to which the debate over China has been “rebalanced, or balanced, for the first time in Canada.”

This is due to what happened to the two Michaels in particular, but perhaps even two years earlier when Canada began giving more attention to issues such as national security and the impact of foreign interference, he said.

“For decades, China has been viewed primarily through an economic lens,” Chase said. He noted that this dates back to former prime minister Jean Chretien and his Team Canada missions, “which he boasts openly of being one of the first Western leaders back in China after Tiananmen Square,” referring to the student-led pro-democracy protests in Beijing in 1989 that was crushed by the communist authorities, resulting in an estimated thousands of people killed.

“The debate over China is guided by organizations like the Canada China Business Council and other organizations, [like the] Canada West Foundation in recent years,” said Chase.

“For many years, the debate over China has also been framed by certain experts at certain universities. some of whom I would argue have a conflict of interest, because they’re also helping their universities expand to China, build partnerships in China, solicit donations in China, and also have consulting businesses.”

The regime’s arrest of the two Michaels, “which was an awful, and horrible and tragic incident, but also, I think [one that] woke up Canadians,” Chase said.

Negative perception of the Chinese communist regime reached a historic high in 2020 during the COVID-19 outbreak, with only one in five Canadians holding positive views about the country, and little has changed since that time.

The other co-panellist, Margaret McCuaig-Johnston, a senior fellow at the University of Ottawa’s Graduate School of Public and International Affairs, was in Shanghai when Spavor and Kovrig were detained. She said her own locked suitcases in her hotel room were unlocked and searched at the time, and she was told by a Chinese executive she was meeting with that “China has a list of 100 Canadians that it can pick up and interrogate at any time.”

St.-Jacques noted that despite the return of Meng to China and the two Michaels’ return to Canada, relations between the two countries “remain at the low point,” with all official dialogues put in place by the Stephen Harper and Justin Trudeau governments suspended following Canada’s recent decision to ban Huawei from 5G development in Canada.

“Canadian foreign policy has been neglected for the last 15 years, and as a result, Canada is no longer perceived as an influential or useful player,” St. Jacques added.

The former ambassador said that going forward, “as trust has been broken,” Canada’s strategies with China “should be based on the defence and protection of our values and national interests, as well as reciprocity and transparency.”

“There should be zero tolerance for interference and spying activities in Canada,” he said, noting that Canada should look at the foreign interference laws adopted by Australia to prevent Chinese interference.