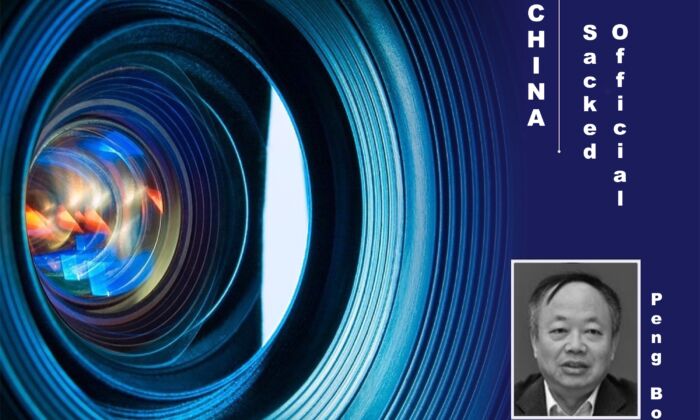 The Chinese regime announced on March 13 that Peng Bo, deputy director of China’s “Gestapo”—secret state police—had been dismissed and is under investigation.

Peng has become the first high-ranking Chinese Communist Party (CCP) official, known as “tigers,” to be ensnared in party politics after the regime’s most important annual political conference, its Two Sessions meeting, which concluded on March 11.

After the CCP made the announcement, all Chinese media quickly removed Peng’s official resume and photos—an unusual move.

“This is so extraordinary. Even Zhou Yongkang and Bo Xilai haven’t been treated in this way,” Epoch Times China analyst Heng He said in a podcast on March 13.

Zhou and Bo are among the most senior CCP officials that have previously been sacked by the party.

The CCP’s anti-corruption watchdog, the Central Commission for Discipline Inspection (CCDI), announced on Saturday that Peng was “suspected of seriously violating discipline and laws, and is under investigation and inspection.”

This is the standard sentence used by the CCDI to sack most officials.

On the announcement, Peng’s title was deputy director of the Central Leading Group on Preventing and Dealing with Cults, a Gestapo-like security agency under both the CCP central committee and the state council.

This is the first public information about Peng working at the group.

The group, normally known as the “610 Office,” was established on June 10, 1999, and is dedicated to implementing the persecution and eradication of Falun Gong, a Buddha-school spiritual practice that teaches the values of truthfulness, compassion, and forbearance.

As a secret office, the “610 Office” doesn’t have an official website, and it has been difficult for the public to know who works for the office from public information.

Before his placement at the “610 Office,” Peng was deputy director of the Cyberspace Administration of China (CAC), China’s internet regulator, censor, monitor, and control agent.

Peng, 62, used to work at Beijing Youth Daily that is operated by the Beijing city government, the financial newspaper China Industrial and Commercial Times that is owned by the All-China Federation of Industry and Commerce, the China Youth Press that is a subsidiary of the Communist Youth League Central Committee, and the propaganda bureau of the CCP Central Committee.

Peng was CAC deputy director from September 2012 to August 2015, and then worked as leader of propaganda at the CCP’s Central Political and Legal Affairs Commission (PLAC) until September 2018.

Beijing News, a media outlet operated by the Beijing city government, reported on March 13 that the CCP’s central committee might have started investigating Peng as early as the summer of 2016.

“The political acumen and discernment of some officials [at the ‘610 Office’] aren’t good. They should strengthen their capabilities to predict and cope with major sensitive events,” the report quoted from a 2016 internal document of the CCP’s central committee. “[The committee] has received the clues that reflected some officials’ disqualifications, and handed them over to CCDI and the Central Organization Department for further investigate.”

The Central Organization Department is CCP’s agent to appoint or dismiss officials according to Chinese leader Xi Jinping’s order.

Overseas Chinese websites have commented that Peng is loyal to the retired Politburo Standing Committee member Liu Yunshan and retired PLAC head Meng Jianzhu, both who were members of the rival Jiang Zemin faction that fights Xi for power. Peng’s investigation is being seen by analysts as the latest action in Xi’s “anti-corruption campaign” that has targeted his political opponents.

The Shanghai city government-operated Jiefang Daily reported on March 14 that the CCP has sacked several “tigers” from the “610 Office” in recent years.

From the CCP’s announcements, former directors Zhou Yongkang, Li Dongsheng, Zhang Yue, Sun Lijun, Xu Yongyue, and Zhou Benshun were sacked from their positions at the “610 Office.” Among them, former “610 Office” leader, PLAC head, and member of Politburo Standing Committee, Zhou was sentenced to life in prison with the crime of abuse of power and corruption in June 2015.