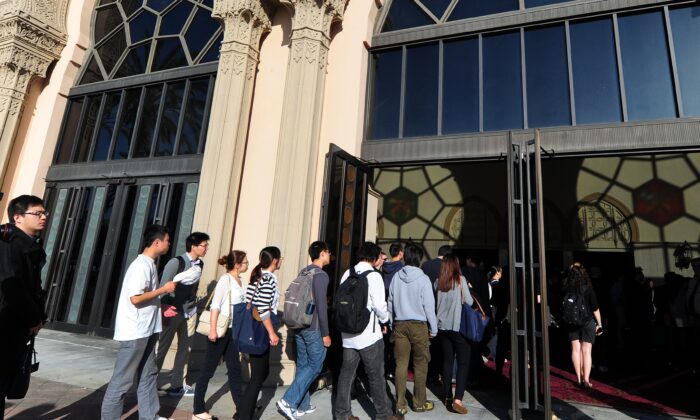 From Houston to the small town of Esbjerg in Denmark, the Chinese regime has its eyes on Chinese nationals and foreigners around the world—people it hopes to influence into furthering Beijing’s interests.

The list, disclosed in a leaked government document that was recently obtained by The Epoch Times, revealed that the Chinese regime seeks to “cultivate talent” in a wide breadth of sectors and countries.

For decades, Beijing has maintained such talent-recruitment programs, such as the widely scrutinized “Thousand Talents Plan,” which lures overseas Chinese and foreign experts into working in China’s science and tech sectors—to help fulfill its ambition of turning China into a high-tech manufacturing powerhouse.

The internal list offers a glimpse into the scale of Beijing’s influence operations and also reveals that they stretch across diverse fields.

Another set of documents revealed that amid the COVID-19 pandemic, authorities have begun tracking expatriates living in China and monitoring their health status.

A third set exposed how authorities keep a tight leash on citizens who travel abroad.

The documents were all issued by the Foreign Affairs Office of the municipal government of Daqing. A city with a population of about 2.7 million as of the end of 2019, it’s located in northern China’s Heilongjiang Province.

In a 2019 document, Daqing’s Foreign Affairs Office stated that it would start an initiative called the “one hundred overseas talent cultivation plan.”

The central government and many local governments in China have such talent recruitment programs. A 2019 report by the U.S.–China Economic and Security Review Commission estimated that there were hundreds of such programs at the local government level.

Though the office didn’t explain how it would carry out its plan, nor its specific goals, it listed 129 “overseas” individuals it would like to recruit. Among them were at least 70 who weren’t ethnically Chinese, based on having a non-Chinese name. The document contained only the first names for some of these individuals. But each entry stated their current or former job positions, their career fields, as well as their contact information.

The targeted people span the globe—New Zealand, United Kingdom, Pakistan, Spain, Ghana, Malaysia, and South Africa among them—and work in a variety of fields: staff in the tourism industry, professors at universities, CEOs, and other business executives, chemistry specialists, people working in international trade and business, manager of a waste treatment plant, and so forth.

The latter two didn’t immediately respond to a request for comment.

Officials in the local governments of Houston; Tokyo; and Calgary, Canada, were also targeted, in positions such as “high-level policy consultant” and “executive official.”

Chinese individuals who were officials at the Japan-based firms Mitsubishi Corp. and Mitsubishi Chemical, as well as a Chinese manager of a Hawaii travel agency, were also on the list.

A 2020 action plan issued by the Daqing office stated that the government would focus on establishing ties with businesses in Japan and South Korea.

During the COVID-19 pandemic, officials also monitored foreigners in Daqing.

In one document dated Feb. 29, the Daqing office kept a record of over 180 foreigners in the city, including exchange students, teachers, and foreign experts. These expats came from countries such as the United States, Canada, Chad, Morocco, Zimbabwe, South Africa, Taiwan, Sweden, the UK, and Australia.

It stated that local health officials were monitoring their health status due to the pandemic, and showed their detailed personal information, such as passport numbers, birthdays, and current residential addresses in China.

Another document, dated April 9, is a “daily work report,” which updated the number of foreigners who were either working or studying in Daqing (220).

One section detailed whether foreigners who recently arrived in Daqing were under quarantine.

At the time, those entering Heilongjiang Province were required to be quarantined for 14 days.

For example, an unnamed foreigner was placed under isolation at home after arriving from Chengdu, the capital of southwestern China’s Sichuan Province. The foreigner arrived in China from Canada on March 6, the document stated.

Another document warned that those Chinese officials who travel overseas on business trips were at risk of having their political ideologies changed. The Daqing office set out specific guidelines for these people, before they leave and after they return to China.

Before embarking on their overseas trips, they’re to sign a pre-departure letter and undergo training given by the Daqing’s state secrecy bureau, the document stated.

Daqing’s state security bureau would also provide “education lessons” to these people before and after their overseas business trips.

While the leaked document didn’t explain exactly what the pre-departure letter stipulates, Chinese universities also require their teachers to sign such documents before going on business trips overseas.

Changzhou College of Information Technology, which is located in coastal China’s Jiangsu Province, requires its teachers to sign one such letter, which required that they not be interviewed by foreign journalists unless with approval from the leader organizing their trip, that they not leave the group without permission to see friends or family members living abroad, and that they not watch any activities organized by members of Falun Gong, a spiritual practice that’s been severely persecuted by the Chinese regime since 1999.

Epoch Times staff member Cathy He contributed to this report.