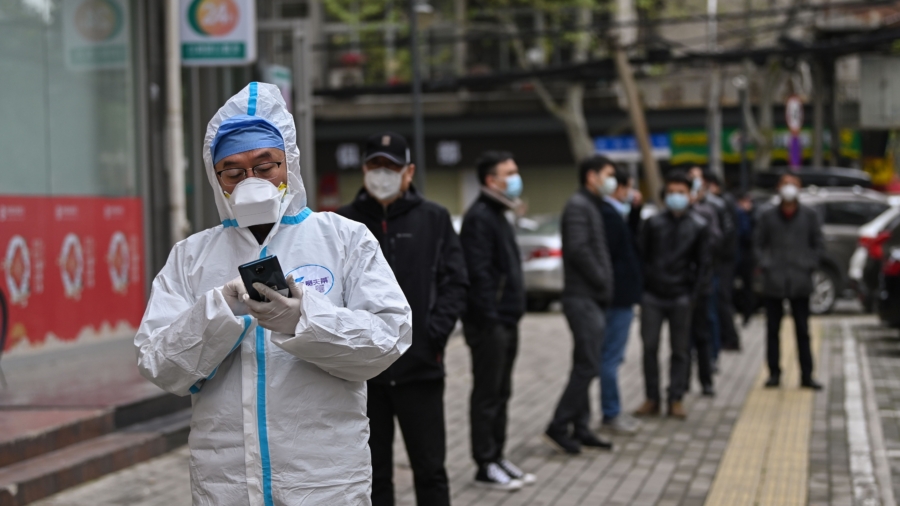 People wait to be tested for the CCP virus in Wuhan, China’s central Hubei province on March 30, 2020. (Hector Retamal/AFP via Getty Images)

By Bowen Xiao, The Epoch Times

The Chinese Communist Party has deliberately masked the total number of COVID-19 cases in China in a bid to safeguard its image both nationally and internationally, according to China experts as well as evidence documented by The Epoch Times.

As more countries express anger and frustration over Beijing’s botched handling of the virus—fueled by a wide-reaching coverup—half a dozen experts told The Epoch Times the regime is undeniably underreporting cases of the virus, but to what extent is up for debate.

Beijing itself publicly admitted to hiding the number of people with the disease when it announced it would start reporting cases of asymptomatic carriers on April 1, revealing that it hadn’t been doing so. China’s National Health Commission also acknowledged that asymptomatic carriers can infect others and cause outbreaks, which it had previously dismissed.

John R. Mills, former director of Cybersecurity Policy, Strategy, and International Affairs at the Office of the Secretary of Defense, said the communist regime is “all about legitimacy, stability, and no one questioning their preeminence.”

“The CCP virus changes everything … All of this chaos shakes the Chinese people’s confidence in the system and they are hopping mad,” he told The Epoch Times.

Mills said recent claims pushed by the regime of zero new cases in China are “patently absurd” adding that in totalitarian bureaucracies “everyone learns real quickly to stop reporting.”

The regime is expelling U.S. journalists based in China who work for The New York Times, The Wall Street Journal, and The Washington Post, highlighting the country’s dismal track record on press freedom. China ranks 177 out of 180 in the 2019 Reporters Without Borders World Press Freedom Index.

“Bad things happen to people that report bad numbers,” Mills said about China. “In these systems and forms of government, everyone learns that to survive, lying is the norm. Everyone lies to everyone about everything—there is no truth.”

In the past three months, the number of Chinese cellphone users dropped by 21 million, suggesting that deaths due to the CCP virus may have been a factor. Since Sept. 1, 2010, China has required all cellphone users to register phones with their real identification.

A series of internal government documents obtained by The Epoch Times paint a damning picture of Beijing’s coverup.

In China’s Shandong province alone, daily new infection numbers were up to 52 times higher than officially published data by the Shandong health commission and China’s National Health Commission. Information provided by residents in Wuhan also indicates the death toll there could be more than 32,000—12.7 times the official figure.

Mills said that while no government or leader can act perfectly in a fast-moving, complex situation like the current pandemic, which has forced more than 1.5 billion people across the world to stay in their homes, the CCP is willfully consistent in its obfuscation and lying. There has been little if any good faith, cooperation, or diligence in pursuit of truth by the CCP, he added.

Before President Donald Trump took office, the CCP took advantage of the United States’ open society, and for years, “they got away with it,” Mills said, adding that “many have come to the conclusion that the CCP is pushing a false narrative for craven political purposes.”

Yang Jianli, a Chinese dissident and son of a former Communist Party leader who now heads the Citizen Power Initiatives for China, a pro-democracy NGO in the United States, said the downplaying of cases is crucial to Beijing’s “broader goal of global leadership and domination.”

“The truth about COVID-19 inside China is the greatest obstacle to [Chinese leader Xi Jinping’s] ambition,” Yang told The Epoch Times. “As long as Xi is seen as being successful, there is little room to challenge his rule.

“Should that assessment change, however, it is not hard to imagine grudge-holding Party members and angry people—independent intellectuals, dissidents, and ordinary people—attempting to coalesce in an effort to challenge him.”

Yang agrees with U.K. advisers who state that China’s cases are likely downplayed by a factor of 15 to 40 and urged the international community to “hold the CCP accountable.”

Scientific advisers warned the United Kingdom’s prime minister that the Chinese Communist Party’s (CCP) official statistics on the virus could be “downplayed by a factor of 15 to 40 times” and that Downing Street believes Beijing is attempting to exploit the pandemic for economic gain, reported by The Mail on March 28. The Epoch Times reached out to the No. 10 press office; a spokesperson declined to comment.

Movie theaters across China had slowly started to reopen under permission from the CCP, until last week—when officials suddenly reversed course and ordered all theaters to revert back to shutdown mode. Medical professionals in Spain and the Czech Republic, meanwhile, reported that CCP virus rapid tests imported from China failed 70 to 80 percent of the time.

“The CCP, which for years has claimed to be a responsible member of the global community, showed once again its true colors when this crisis hit,” Yang said. “If the CCP gets away with this, or worse yet, if it actually earns global plaudits for its actions, then no country will feel the need to be honest with the world if it deems being honest politically unfavored.”

Chinese officials and state-run media have attempted to shift the blame for the regime’s failure to contain the virus by pushing conspiracy theories targeting the United States as part of an aggressive global disinformation campaign.

CCP bots have been swarming Twitter to defend the communist regime, attack the United States, and parrot propaganda narratives in concert with Chinese officials. Chinese overt influence accounts have published “over 32,000 posts related to COVID-19 on several Western social media platforms,” according to a recent report by cybersecurity company Insikt Group.

Yang cautioned that if left unchecked, an emboldened CCP “will grow only more aggressive externally and repressive internally, having learned that it can fool and bully the world into submission.”

The Epoch Times has documented stories of some Chinese citizens—including whistleblower doctors, citizen journalists, scholars, and business people—who have been silenced by the regime for exposing the truth.

Joseph Bosco, a former China country desk officer at the Office of the Secretary of Defense, told The Epoch Times that the regime is evading and suppressing the truth about the virus, like it does most other things, “to preserve the myth of the competence and infallibility of the CCP.”

In recent days, thousands of ash urns were delivered to a funeral home in Wuhan, further prompting questions of the true scale of the outbreak and its severity. Photos of the long lines circulated on Chinese social media before they were promptly deleted by the regime’s censors, The Epoch Times previously reported.

“It is clear that for Xi, political self-preservation is more important than lives that can be saved, in China and around the world, by accurate media coverage,” Yang added.

Frank Gaffney, vice chairman of the Committee on the Present Danger: China, told The Epoch Times that Beijing has done a masterful job at concealing the truth and deflecting blame.

“These are the sorts of things that totalitarians do and I think that [China] will be regarded as a pariah when the public more generally—not just in China, but beyond—properly understands the role that the Chinese government has been playing and the magnitude of the damage that’s been done worldwide as a result,” he said.

Gaffney, who was assistant secretary of defense for international security policy during the Reagan administration, said anyone who believes claims from the CCP on any basis is “making a terrible mistake.”

“It would be the height of folly to trust the Chinese on anything, particularly when lying about their statistics, whether it’s the effects of the disease or in other cases, the impact on their gross domestic product,” he said. “Anything that they tell you, I think, has to be treated with intense skepticism, if not downright disbelief.”

A China insider told The Epoch Times in January that public health authorities were attempting to cover up the severity of the virus by limiting the number of diagnosis kits sent to Wuhan hospitals.

The Epoch Times has also spoken to Chinese residents who complained about being turned away from hospitals and weren’t diagnosed. Many of these people later died as a result.

The United States and China

“It certainly seems to me that a wholesale reconsideration of the kind of engagement that we’ve had with China to this point is not only overdue but absolutely mandatory,” Gaffney said. “I think that more and more Americans are feeling that way.”

Author and China expert Gordon Chang said the CCP is trying “to give the impression that China has recovered” as part of a deeper battle with the West. He believes China is either being hit with a second wave of infections, or it never recovered from the first.

“They are relentlessly promoting the line that China’s system is superior to America’s,” Chang told The Epoch Times. “Moreover, Beijing has gone on the attack by pushing the notion that the U.S. is in decline.”

“Just about everyone in China knows the coronavirus still ravages the country. And soon the rest of the world will know, too,” Chang said. “Regime fibs, lies, and untruths will not last long. The virus gets the last word.”

Dr. Deborah Birx, the response coordinator of the White House Coronavirus Task Force, suggested at a March 31 briefing that the United States response was slow because of flawed data from China.

“When you looked at the China data originally … you start thinking of this more like SARS [severe acute respiratory syndrome] than you do a global pandemic,” she said.

“The medical community interpreted the Chinese data as, this was serious, but smaller than anyone expected,” Birx said. “Because, probably … we were missing a significant amount of the data.”