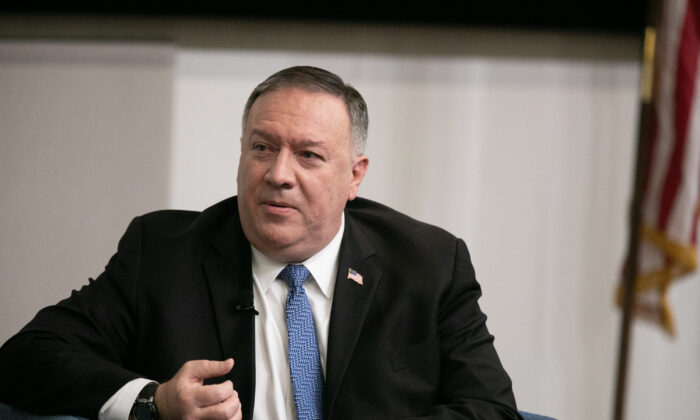 The move came a day after Pompeo declared the CCP’s repression of Uyghur Muslims in the Xinjiang region a “genocide.”

The Chinese regime sanctioned 28 people on Jan. 20. A foreign ministry spokesperson accused them of “seriously violated China’s sovereignty,” adding that they were “responsible” for “a series of crazy moves” which “seriously disrupted China-U.S. relations.”

Those sanctioned and their immediate family members are barred from entering mainland China, Hong Kong, and Macau, according to the spokesperson. The individuals and “companies and institutions associated” with them will also be restricted from doing business with China, the statement added.

The former U.S. officials sanctioned were involved in the Trump administration’s response to threats posed by the CCP. These include sanctions on CCP officials for rights abuses in Xinjiang and Hong Kong, banning U.S. investments into Chinese companies with ties to the military, and convincing allies to shut out Chinese telecom giant from 5G networks around the world over national security threats.

Azar and Krach last year visited Taiwan, becoming the highest-level U.S. officials to visit since the United States switched formal relations from Taiwan to China in 1979. Craft was also due to visit the island last week but ended up speaking to Taiwan President Tsai Ing-wen via teleconference instead when it was canceled due to transition efforts. The high-level visits, as well as the Trump administration’s increased engagement and arms sales to the democratic island, angered Beijing, which views Taiwan as part of its territory.

In one of his final acts as secretary of state, Pompeo declared that the regime has committed “genocide and crimes against humanity” against Uyghurs and other Muslim minorities in the far-western Xinjiang region. Biden’s pick for secretary of state, Antony Blinken, told a Senate hearing on Tuesday that he agreed with the designation. He also acknowledged the grave threat posed by the regime and pledged to work with allies to push back against Beijing.

The CCP’s persecution campaign in the region, perpetrated through its network of internment camps and mass surveillance system, has drawn international condemnation. Under the pretext of combating “extremism,” the regime has detained more than 1 million of the region’s inhabitants, and subjected them to forced sterilization, forced labor, and torture.

Beijing, which denies the atrocities, lashed out at Pompeo during a foreign ministry press briefing on Wednesday, calling him a “doomsday clown,” while describing the designation as a “piece of wastepaper.”