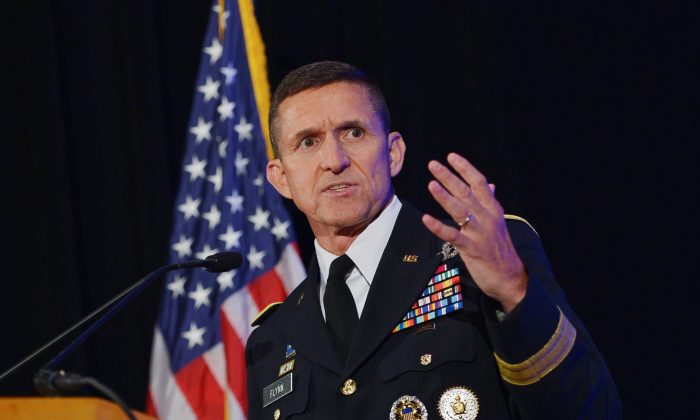 Retired Lt. Gen. Michael Flynn, in his first public interview since being pardoned by President Donald Trump, said there is “still a coup in progress” against the president.

Flynn, who also served during the Obama administration as director of the Defense Intelligence Agency and then as Trump’s first national security adviser, warned Americans on Nov. 28 that there is currently an “assault” on our way of life that has been going on since the beginning of Trump’s presidency.

“They’ve upped their game,” Flynn told WVW-TV of certain figures in the Democratic Party, which he said was “in name only” since its shift “way over on the left.”

“When they lost in 2016, I think that there was a decision to say, ‘We’re not going to allow this to happen again,’” Flynn said of the Democratic Party’s leadership.

He then pointed to the heightened political divisiveness during the entire four years of the Trump presidency, during which time the mainstream media, alongside what he described as effectively the “Democratic Socialist Party of America,” have been trying to remove Trump from office.

“I mean, I think what we experienced over the last four years—and certainly in the late-2016, early-2017 period—was a very strong effort to unseat a duly elected president,” Flynn said.

He said that Trump, as a non-politician from New York, faced an unprecedented onslaught of political, technological, and also financial pressure early in his tenure to force him to walk away from politics.

“I know there was some sentiment that maybe he’ll just … say, ‘You know what, I don’t need this stuff. I got better things to do,’ and leave,” Flynn said.

“Thank God that he didn’t.”

But as Trump remained in office, Flynn said the political establishment and the media continued to go after him “in any way possible,” which played out publicly in “psychological operations” such as the Russia probe and House Democrats’ impeachment effort, and more recently, the politicization of the CCP (Chinese Communist Party) virus pandemic.

Now, Flynn claims, because the Democratic Party didn’t achieve the result in the vote it needed to secure former Vice President Joe Biden’s place in the White House, America is seeing “theft with mail-in ballots” and “theft with this Smartmatic software and Dominion systems.”

“This is still a coup in progress,” he said.

He went further to say that the ideological cousin of America’s far-left political groups, the Chinese Communist Party, has interests in supporting such a coup.

“What we have seen is … over the last probably two decades … is a complete shift in how fast, I believe, that communist China in their long-term plan decided to sort of move up their plans to become the sole global superpower on the planet,” Flynn said.

“I believe when during the last 2016 election, when they didn’t get the candidate that they needed, and the kind of ideology that they saw America moving towards, they were not going to allow 2020 to happen,” he said, blaming the foreign-owned software systems used in the election for leaving the country vulnerable to foreign interference.

But he added, with the “hundreds and hundreds” of American patriots across the country coming forward to offer their witness testimony as affidavits to “warriors” on the legal battleground, such as Rudy Giuliani and Lin Wood, “I believe we’re going to see some momentum changing here.”

“There already is an undercurrent of momentum shifting for the president and I believe that at the end of the day, we’re going to find out that he won by a massive landslide and he’ll be inaugurated come this January,” he said, referring to the numerous legal challenges currently pending or being considered by courts in battleground states and the Supreme Court.

Flynn made headlines in 2017 when he was targeted by the intelligence community for charges of “Russia collusion.”

While Flynn pleaded guilty on Dec. 1, 2017, to lying to the FBI over speaking to then-Russian Ambassador to the U.S. Sergey Kislyak during Trump’s 2016 transition period, he later withdrew his plea, saying that it was part of a deal with prosecutors over threats of charges targeting his son. The retired three-star general also accused the government of misconduct related to his case.

His case was used by the media to push the unsubstantiated narrative that the Trump campaign colluded with the Kremlin to sway the outcome of the 2016 election.

Sen. Ted Cruz (R-Texas), who sits on the Senate Judiciary Committee, said on Nov. 10 that the FBI’s motivation for pursuing Flynn was “bogus political persecution and prosecution” by those who disagree “politically with President Trump.”

Jack Phillips contributed to this report.