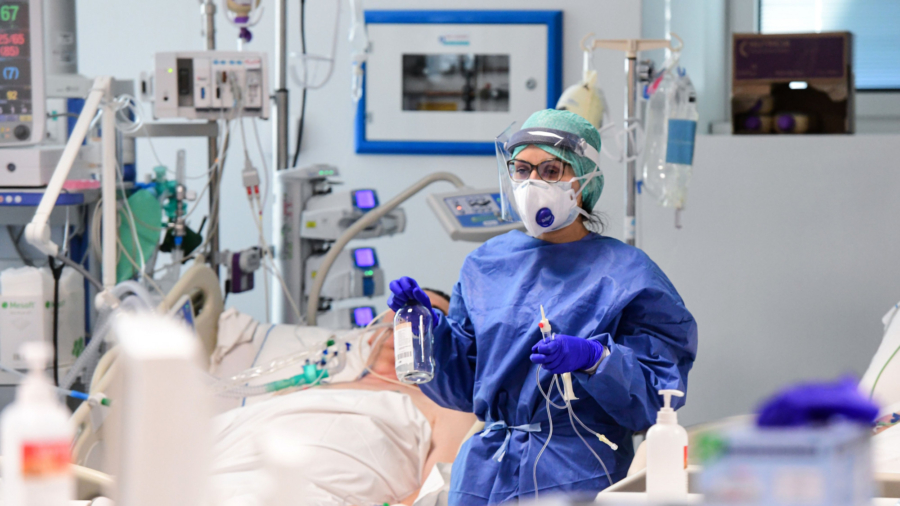 A medical worker wears a protective mask and gear as he tends to a patient inside CCP virus intensive care unit at Brescia Poliambulanza hospital in Lombardy, Italy, on March 17, 2020. (Pierco Cruciatti/AFP via Getty Images)

One in five COVID-19 patients develop some kind of skin manifestations, according to an Italian study, which can make doctors mistakenly diagnose COVID-19 patients with another illness, such as dengue fever which also produces a rash.

These skin manifestations “are similar to cutaneous involvement occurring during common viral infections,” said the author of the report, Dr. Sebastiano Recalcati, a dermatologist at Alessandro Manzoni Hospital in Lecco, northern Italy.

Recalcati, who was leading a team of doctors based their findings on a group of 148 hospitalized patients infected with the CCP (Chinese Communist Party) virus, commonly known as novel coronavirus, which causes the disease COVID-19.

Out of the 148 positive CCP virus cases in their hospitals, doctors excluded 60 of them from their study because they had been taking new medicine in the past 15 days. Of the 88 patients tested then, 18 people, around 20.5 percent, developed some kind of dermatologic issue.

Eight patients developed cutaneous conditions from the onset, and 10 developed them after hospitalization. Fourteen had a reddish rash, three had hives, and one patient had chickenpox-like vesicles. The researchers could establish no correlation between the intensity of the skin eruptions and that of the disease’s severity.

The finding corroborated with a recent Thai study by Dr. Beuy Joob of the Sanitation1 Medical Academic Center in Bangkok.

Joob and his team based their finding on the first confirmed COVID-19 case outside China, a Thai man who was first falsely diagnosed with dengue fever because he had a skin rash that strongly reminded of the “breakbone fever.”

The Italian and Thai findings were further confirmed by Dr. Randy Jacobs, an assistant clinical professor of dermatology at the University of California, Riverside, according to The Hospitalist. “Many have wondered if COVID-19 presents with any particular skin changes. The answer is yes,” Jacobs, who also owns a private practice in Southern California, said.

“COVID-19 can feature signs of small blood vessel occlusion. These can be petechiae or tiny bruises, and transient livedoid eruptions (or painful purpuric lesions),” said Jacobs. “Another dermatologist friend of mine also reported a similar transient COVID-19 unilateral livedoid eruption.”

Jacobs said the skin eruptions are caused by the closure of tiny blood vessels, which might be induced by the nervous system, microthrombotic effects, or the immune system. Still, it’s “a skin finding that can help clinicians as they work up their patients with COVID-19 symptoms.”