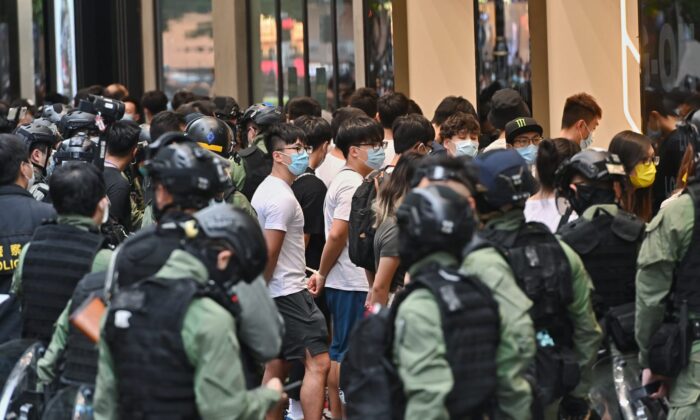 A group of Hongkongers is arrested by local police in Causeway Bay, Hong Kong, on Oct. 1, 2020. (Song Bilung/The Epoch Times)
BY FRANK FANG

This article has been updated with the latest information.

At least 86 people have been arrested in Hong Kong as local police broke up scattered protests on Oct. 1, which marks the 71st anniversary of the Chinese Communist Party’s takeover of China.

Police said in a statement late on Thursday that at least 86 people were arrested from the site of protests around the city, on charges such as participating in “unauthorized assemblies,” “possessing offensive weapons,” and other allegations.

Among those arrested were four district councilors. The Hong Kong edition of The Epoch Times identified two of them as Lee Yue-shun and Fergus Leung.

The Causeway Bay district, where 74 were arrested, was the proposed starting point of a planned march organized by local pro-democracy group Civil Human Rights Front (CHRF). Police banned the march, arguing that mass gatherings of people during the pandemic could pose a “grave threat” to public health.

Hong Kong has a total of 5,088 COVID-19 cases as of Sept. 30. The city has seen a steady decline of infection cases since early September, registering 65 cases between Sept. 17 and 23, and 38 cases from Sept. 24 to 30. COVID-19 is a disease caused by the Chinese Communist Party (CCP) virus, commonly known as the novel coronavirus

CHRF initially organized the march to call for the release of 12 Hongkongers currently being held in southern China’s Shenzhen city. While traveling on a boat, they were intercepted and arrested by Chinese authorities off the coast of southern China’s Guangdong Province. Hong Kong media reported that they were sailing to Taiwan in a bid to obtain political asylum there.

It is an annual tradition for Hongkongers to protest Beijing’s rule on Oct. 1, with activists noting that China’s “national day” is not a day of celebration, but a time to reflect on tragic events since the Communist Party seized power in mainland China in 1949, such as the Tiananmen Square Massacre of student protesters in 1989.

On Thursday morning, four members of the local party League of Social Democrats marched to Sai Ying Pun holding a banner with the words, “There is no national day celebration, only national mourning” and “End one-party dictatorship.”

Large numbers of police officers began gathering in Causeway Bay before 2 p.m. local time, which was the proposed starting time of the CRHF march.

Police searched pedestrians, pushed and shoved journalists covering the protests, and dispersed crowds, while repeatedly raising flags warning people that they could be arrested for illegal gatherings or violating the newly-implemented national security law.

Beijing’s national security law punishes vaguely-defined crimes such as secession and subversion with a maximum penalty of life imprisonment. The law went into effect late on June 30 despite international concerns that the law would crush basic freedoms in Hong Kong.

Despite the heavy police presence, protesters shouted popular slogans such as “Five Demands, Not One Less,” and “Liberate Hong Kong, Revolution of Our Time.”

On July 2, the Hong Kong government banned the latter protest slogan, saying it violated the security law due to its connotations of “Hong Kong independence,” or a Hong Kong that is separate from mainland China.

Hong Kong, a former British colony, returned to Chinese rule in 1997. Beijing promised to retain the city’s autonomy and freedoms, but international critics and locals say the security law has spelled the end for Hong Kong’s liberties.

A person dressed up as North Korean leader Kim Jong-un, while holding a balloon in the shape of a missile, showed up in Causeway Bay to show support for protesters. The balloon was decorated with a piece of paper that read, “[expletive] the Communist Party.” His presence drew applause from gathering protesters.

Late Thursday evening, some protesters climbed up the Lion Rock mountain and shone lights with protest messages. Police then began restricting people from accessing the area.

The city has seen tumultuous protests against Beijing since millions took to the streets in June last year to oppose a since-scrapped extradition bill. But the pandemic, coupled with fears of arrest under the security law, have diminished protesters’ presence.

On Sept. 29, Hong Kong police announced on its Facebook page that 10,022 people have been arrested from the site of protests from June 9, 2019 to Sept. 15 this year. Among those arrested, 2,227 have been charged, for crimes such as “rioting” and “illegal assembly.”