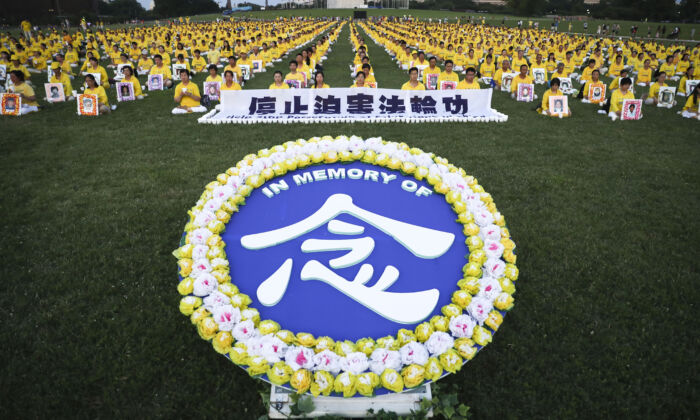 Falun Gong practitioners take part in a candlelight vigil commemorating the 20th anniversary of the persecution of Falun Gong in China, on the West Lawn of Capitol Hill on July 18, 2019. (Samira Bouaou/The Epoch Times)

A retired colonel who was denied visitation for one-and-a-half years passed away suddenly while serving a seven-and-a-half-year prison term for upholding his belief in Falun Gong. The traditional mind-body discipline has been persecuted by the Chinese communist regime since 1999.

Gong Piqi’s family was informed on April 12 that he had died shortly after being taken to a hospital for resuscitation, according to a report on Minghui.org.

Being denied visitation for 18 months, the grief-stricken family knew very little about Gong’s recent experiences or his health condition. Doctors and prison authorities also rejected the family’s strong demand to see Gong’s body. Only Gong’s older brother and nephew were allowed to say goodbye on the condition that they didn’t take any photos or make any recordings.

Gong, who lived in Qingdao city, Shandong Province, was arrested with his wife on Oct. 16, 2017. The police broke into their home and took $20,000 in cash as well as a computer and other personal belongings, according to an earlier report from Aug. 31, 2018.

Gong was sentenced on July 20, 2018, and was serving his prison term in Shandong Province Prison. Records reveal the prison is notorious for torturing Falun Gong practitioners to force them to renounce their beliefs.

Gong’s head was injured and swollen, and he had blood in his ear, according to his brother. Prison authorities reported that Gong was non-compliant during his high blood pressure treatment, which led to a stroke.

In the prison’s surveillance video, shown to the family, Gong was sick in the evening. Later, a prison doctor came to check Gong’s blood pressure and left without providing any treatment.

The prison report mentioned that Gong fell to the ground around 8:32 p.m. and an ambulance didn’t arrive until 9 p.m.

Gong’s family spoke about the agony and pain they suffered in the past two decades.

“I grew up in fear,” Gong’s daughter said at a rally in San Francisco when Gong was arrested in 2017.

“In May 2015, he was tortured and his hair turned gray. He could not walk by himself, and his internal organs were damaged from the beatings,” she recalled about the time when Gong was incarcerated in a brainwashing center.

“Many innocent people, even though they don’t practice Falun Gong, have been hurt by the persecution policy. I still remember that my mother’s co-workers and her employer were also harassed. Her supervisors had to pay fines,” she said.

Officially launched on July 20, 1999, the unprecedented, brutal persecution of Falun Gong has resulted in hundreds of thousands of arrests, disappearances, and the documented deaths of over 4,500 Falun Gong practitioners—though the number is feared to be much higher.

Falun Gong, also known as Falun Dafa, is an ancient Chinese spiritual practice consisting of simple, slow-moving meditation exercises and teachings based on the principles of truthfulness, compassion, and tolerance. It grew in popularity during the 1990s, with 70 million to 100 million adherents in China by the end of the decade, according to official estimates at the time.

Feeling threatened by its popularity, the Chinese Communist Party (CCP) launched a systematic elimination campaign in July 1999. Since then, millions have been detained inside prisons, labor camps, and other facilities, with hundreds of thousands tortured while incarcerated, according to the Falun Dafa Information Center.