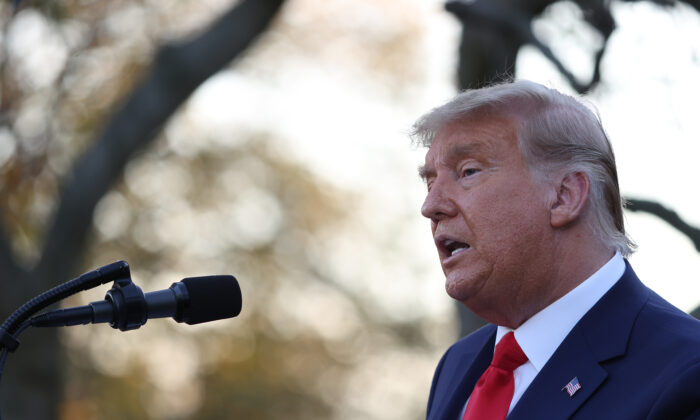 President Donald Trump speaks about Operation Warp Speed in the Rose Garden at the White House in Washington on Nov. 13, 2020. (Tasos Katopodis/Getty Images)
BY JACK PHILLIPS

Harvard Law professor emeritus Alan Dershowitz predicted that President Donald Trump will attempt to settle the election in a way not seen since the 19th century.

In an interview with Newsmax, the longtime legal expert said Trump no longer is attempting to reach 270 Electoral College votes but will instead focus on denying Democratic nominee Joe Biden’s chances of getting 270 votes.

“Let’s look at the big picture: The big picture now has shifted,” Dershowitz told the website. “I do not believe that President Trump is now trying to get to 270 electoral votes. I think he thinks that’s out of the question.”

Trump hasn’t signaled in public about his chances of securing 270 votes due to several legal challenges.

“What he’s trying to do is to deny Joe Biden 270 votes, by challenging in Pennsylvania, Georgia, in Nevada, in Michigan, in Arizona,” Dershowitz said, adding that not allowing Biden to reach 270 out of 538 votes would eventually force House state delegations to vote, where Republicans have an advantage over Democrats. Currently, the GOP has a 26-23-1 state delegation majority in the House of Representatives.

“If he can keep the Biden count below 270, then the matter goes to the House of Representatives, where, of course, there is a Republican majority among the delegations of states, and you vote by state if it goes to the House,” Dershowitz said. “He’s trying to follow the playbook of three elections of the 19th century.”

Dershowitz noted that a number of things would have to align perfectly for Trump to win under that circumstance.

“You need a perfect storm for it to work,” he said. “You need to get enough states, enough state attorneys general, or state departments, or whoever, secretaries of state or governors that are Republican that legitimately refuse to certify the results because they’re under challenge on the day the Electoral College meets by statute.”

“If on that day, Biden doesn’t have 270 votes—you don’t get to vote two or three times on that; as far as the Constitution’s concerned, it’s one vote—and if the one vote doesn’t give the leading candidate 270 electoral votes, then automatically it goes to the House of Representatives, where a whole new process takes over, and a process that clearly favors President Trump,” added the former law professor.

Trump’s campaign or legal team hasn’t publicly stated whether that strategy is in play. Currently, his lawyers have a number of lawsuits filed in several battleground states, including at least one that is slated to be heard by the U.S. Supreme Court.

According to a Reuters article on Nov. 4, “Normally, governors certify the [election] results in their respective states and share the information with Congress.”

However, it noted, “some academics have outlined a scenario in which the governor and the legislature in a closely contested state submit two different election results. Battleground states of Pennsylvania, Michigan, Wisconsin, and North Carolina all have Democratic governors and Republican-controlled legislatures.”

“It is unclear in this scenario whether Congress should accept the governor’s electoral slate or not count the state’s electoral votes at all,” Reuters said, citing experts.

It further cited the 1876 disputed election, in which three states appointed “dueling electors” that triggered Congress to pass the Electoral Count Act of 1887, which means that “each chamber of Congress would separately decide which slate of ‘dueling electors’ to accept.”

“If the two chambers disagree, it’s not entirely clear what would happen,” the article says, citing experts.

In regard to some of these Electoral College laws and scenarios, “it is fair to say that none of these laws has been stress-tested before,” Benjamin Ginsberg, a lawyer who represented the Bush campaign in 2000, told the news agency.

A contingent election could also be in play, where neither candidate reaches 270 votes. The Reuters article echoed Dershowitz in saying that it means that the 50 House delegations—of which the GOP has a majority—would vote on the president, while the vice president would be chosen by the GOP-controlled Senate.

Jan. 20 is when the term of a current president ends. If the dispute isn’t ended by then, according to law, the House speaker is named president for the interim.

Support an independent outlet at a time when it’s hard to find factual news.
Share this article with your friends.
Source
US News
0
FacebookTwitterLinkedinRedditWhatsappEmail