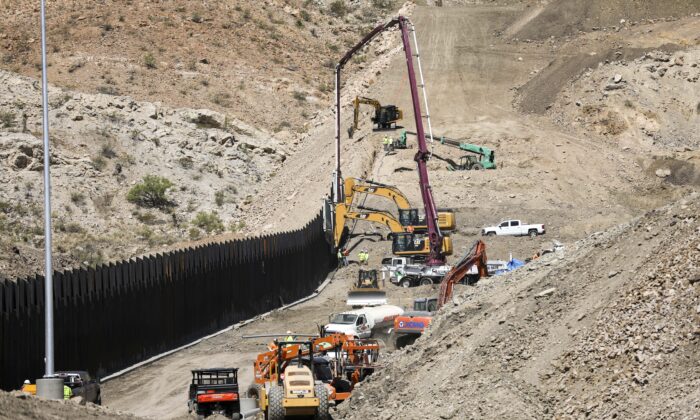 Construction continues on the new half-mile section of border fence built by We Build the Wall at Sunland Park, N.M., on May 30, 2019. (Charlotte Cuthbertson/The Epoch Times)
BY MATTHEW VADUM

Environmentalists asked the Supreme Court to stop the Trump administration from building parts of the U.S.-Mexico border wall after a federal appeals court determined in June that tapping $2.5 billion in military funding for the project was unlawful.

The motion, part of complex litigation, filed with the high court July 22 in Trump v. Sierra Club, asks to lift a stay imposed by the court on July 26, 2019. That order froze a permanent injunction granted by the trial court against the use of the funds until the government’s appeal of that ruling in the U.S. Court of Appeals for the 9th Circuit was dealt with.

In other words, the Supreme Court’s ruling a year ago allowed the Trump administration to use the disputed funds for wall construction.

Environmentalists are fighting President Donald Trump’s efforts to use funding from the Department of Defense Appropriations Act of 2019 to build the wall along the Mexican border in California, New Mexico, and Arizona. Providing border security and cracking down on illegal immigration was Trump’s signature promise during his 2016 campaign for the presidency.

A federal appeals court ruled against the government last month in the long-running dispute. The 9th Circuit Court of Appeals ruled June 26 that the Trump administration’s attempt to transfer $2.5 billion in military pay and pension funds for border wall construction was unlawful. The ruling, which affirmed a U.S. District Court decision, came in a lawsuit filed by the American Civil Liberties Union (ACLU) on behalf of the Sierra Club and Southern Border Communities Coalition (SBCC).

“The Trump administration has lost in every lower court, but is still rushing to complete the president’s border wall before the Supreme Court can review the merits of this case. If the administration succeeds, there will be no border wall construction left to stop by the time the Supreme Court hears this case,” Dror Ladin, a staff attorney with the ACLU’s National Security Project, told The Hill newspaper.

Officials at the U.S. Department of Justice didn’t immediately respond to a request by The Epoch Times for comment.

In the June 26 decision, the appeals court concluded that the financial “transfers were not authorized, and that plaintiffs have a cause of action,” and affirmed the decision of the district court.

“These funds were appropriated for other purposes, and the transfer amounted to ‘drawing funds from the Treasury without authorization by statute and thus violating the Appropriations Clause,’” the appeals court stated, referencing case law. “Therefore, the transfer of funds here was unlawful.”

The interests of the members of the Sierra Club and the Southern Border Communities Coalition and of compliance with the environmental regulatory process trump national security concerns, the court ruled.

The Sierra Club alleged that government actions “will cause particularized and concrete injuries to its members, and SBCC has shown that it has suffered a concrete injury itself,” the appeals court noted.

These members visit border areas “for hiking, birdwatching, photography, and other professional, scientific, recreational, and aesthetic activities. They obtain recreational, professional, scientific, educational, and aesthetic benefits from their activities in these areas, and from the wildlife dependent upon the habitat in these areas.”

Building a border wall and related infrastructure in the affected areas “will acutely injure these interests because [the U.S. Department of Homeland Security] is proceeding with border wall construction without ensuring compliance with any federal or state environmental regulations designed to protect these interests,” the court ruled.