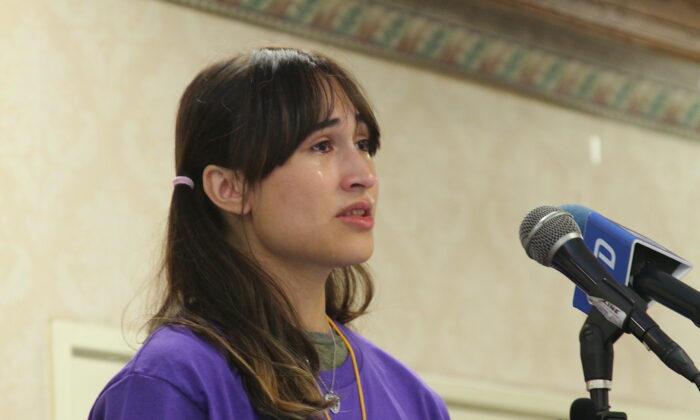 Chloe Cole, who was prescribed puberty blockers, cross-sex hormones, and then had her breasts removed when she was 15, says she will sue the medical group and hospital that facilitated the gender transition as a minor she now deeply regrets.

“The adults who were supposed to take care of and guide me as a child failed to do so and they will take responsibility for it,” Cole told The Epoch Times on Nov. 11.

Cole, now 18 years old, and her legal team—including Dhillon Law Group and LiMandri & Jonna LLP in conjunction with the Center for American Liberty—sent a letter of intent on Nov. 9 to sue the Permanente Medical Group, Kaiser Foundation Health Plan, Kaiser Foundation Hospitals, and several doctors who “performed, supervised, and/or advised transgender hormone therapy and surgical intervention for Chloe Cole when she was between 13-17 years old.”

Kaiser Permanente stands accused of gross negligence causing “permanent irreversible mutilation and damage to her body,” according to the letter. The organization did not respond to multiple requests for comment on Nov. 11.

The letter alleges medical professionals informed Cole’s parents she was “at a high risk for suicide, unless she socially and medically transitioned to appear more like a male.” Her parents were allegedly asked, “Would you rather have a dead daughter or a live son?”

Cole is seeking “punitive damages based on the evidence of malice, oppression and fraud,” according to the letter.

“The medical system shouldn’t dictate the future of young children’s lives. Through this legal action, the ‘professionals’ involved will be held accountable for their despicable plot to mutilate children and financially benefit from it,” said Harmeet Dhillon, CEO of the Center for American Liberty. “We will break the cycle of them breaking our children before it’s too late.”

“My teenage life has been the culmination of excruciating pain, regret, and most importantly injustice,” Cole stated Nov. 10 in a media release. “What is worse is that I am not alone in my pain. I will see to the fact that the blood and tears of detransitioners like myself will not lay waste. It is impossible for me to recoup what I have lost, but I will insure no children will be harmed at the hands of these liars and mutilators.”

The Center for American Liberty also alleged Kaiser did not inform Cole’s parents of psychiatric treatment options or any approach that would attempt to treat her underlying psychological conditions “to bring about a mental state congruent with Chloe’s biological sex.”

Cole alleges she was told by medical professionals the distress she was experiencing due to gender dysphoria would resolve as she transitioned, but after undergoing several phases of transition over multiple years, her mental condition only deteriorated.

“Indeed, her mental health and suicidality issues worsened significantly after she had the double mastectomy,” the letter states. “Eventually, Chloe realized that the answer to her struggle was not surgery and hormones, as she had been advised, but a shift in her mental perspective. She realized that the only way she would be happy is if she mentally accepted her biological sex and chose to live a life that aligned with her natural sex.”

Kaiser Permanente has 90 days to settle the case or respond to the letter of intent to sue before a lawsuit will be filed.