FBI Leaders, Including Comey, Were ‘Fired Up’ About Trump–Alfa Bank Claims: Agent 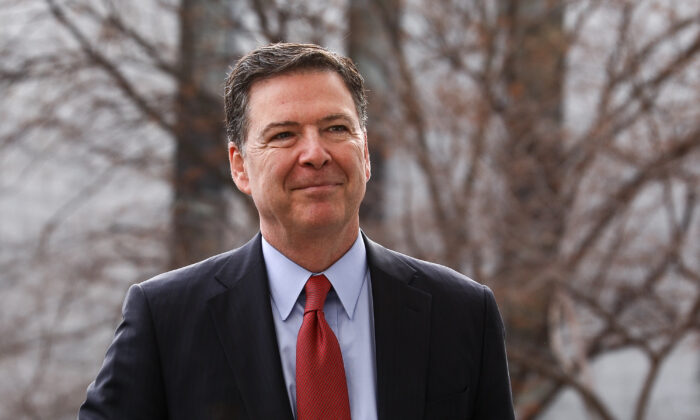 By John Haughey and Zachary Stieber

WASHINGTON—Then-FBI Director James Comey and other bureau leaders were “fired up” in 2016 about allegations that Donald Trump’s business was secretly communicating with a Russian bank, according to internal FBI messages revealed in court on May 23.

“People on the 7th floor to include director are fired up about this server,” Joseph Pientka, an agent based in Washington, told Curtis Heide, a colleague working from the bureau’s Chicago office, in a message dated Sept. 21, 2016.

“Reachout [sic] and put tools on,” Pientka added. “Its [sic] not an option—we must do it.”

The message was sent just days after Michael Sussmann, a lawyer representing the campaign of Hillary Clinton—Trump’s rival for the presidency—met with an FBI lawyer and passed along information that he alleged showed a secret backchannel between the Trump Organization and Alfa Bank.

Even as FBI cyber experts deemed the allegations false within a day—and the CIA would later do the same—the bureau’s counterintelligence arm continued to probe the claims, a move backed by senior bureau officials such as Comey.

James Baker, the former FBI general counsel who met with Sussmann in 2016, quickly handed the information to higher-ups and personally briefed Comey and Deputy Director Andrew McCabe, both of whom were eventually fired by Trump’s Justice Department.

“It seemed to me of great urgency and seriousness that I would want to make my bosses aware of this information,” Baker said.

He recounted that both men were “quite concerned” about the allegations.

Pientka’s message was made public for the first time in federal court during the trial of Sussmann, who is charged with lying to the FBI for saying he wasn’t bringing the allegations on behalf of a client. Prosecutors say he was acting on behalf of the Clinton campaign in a bid to influence the 2016 presidential election. Clinton campaign officials have testified that they didn’t approve Sussmann taking the allegations to the bureau; they preferred to have them promoted in media reports.

Bill Priestap, who was on the stand when the message was read, said he hadn’t seen it before.

Priestap was the FBI’s assistant counterintelligence director in 2016. He retired in 2019 and founded Trenchcoat Providers, which bills itself as helping safeguard businesses against cyber intrusions.

Priestap testified that he “does not recall” why there was “no choice” but to begin an investigation, and was unsure whether the bureau did open a probe. The only reason he knows they did is that there was an official file opened. The file said the probe was approved by four officials, including Daniel Wierzbicki, an official at the FBI’s Chicago office.

Priestap was the first person Baker spoke with after meeting with Sussmann and receiving the Trump–Russia allegations. Priestap claimed not to remember taking notes of the conversation, but, while on the stand, he was presented with notes he had taken.

The notes show that Priestap wrote that he was told that Sussmann wasn’t representing any clients in bringing the information to the FBI, bolstering special counsel John Durham’s case.

The motivation of the person bringing allegations is of interest, but isn’t the only factor the FBI uses to assess what steps to take regarding information, Priestap said. The bureau would want to know if a political campaign was behind any allegations, and if a confidential FBI source was behind them.

Rodney Joffe, another Sussmann client, was a confidential source but, according to prosecutors, utilized Sussmann to convey the information to the FBI, as opposed to taking it himself to his handler.

Joffe was terminated “for cause” in 2021 as a source, prosecutors have revealed.

“It was not something that I was regularly briefed on, and if I recall correctly, at end of the day, it didn’t amount to much,” Priestap said regarding the allegations.

The probe of the allegations primarily took place at the FBI’s Chicago office. Ryan Gaynor, an FBI agent there, recounted on May 23 how he volunteered to track the progress of the probe for the bureau’s headquarters in Washington.

Gaynor learned that Sussmann was representing Democrats but chose to withhold that information from agents performing the analysis of the data. However, he also said that knowing Sussmann brought the data on behalf of a confidential FBI source would have likely led him not to volunteer.

Allison Sands, one of the agents who performed the analysis, determined that the data, which was contained on thumb drives that Sussmann dropped off with Baker along with several white papers, didn’t support the allegations.

Sands said she was prevented from knowing the source of the data because of Gaynor’s decision to keep it shielded. She would have wanted to speak to the source’s handlers if she knew. The team did figure out that David Dagon, a researcher with the Georgia Institute of Technology, authored one of the papers, but the team didn’t interview Dagon.

Sands said she was “either told not to, or to focus on the logs” on the thumb drives.

She said she knew only that the probe was ordered by officials from “someplace in headquarters land.”

Heide testified that the team had to open a full investigation because of demands from FBI leadership. He also said that the bureau headquarters rebuffed requests to interview the original source during the investigation. That led to frustration, and the feeling that the probe was incomplete even after being closed.

John Haughey
John Haughey has been a working journalist since 1978 with an extensive background in local government, state legislatures, and growth and development. A graduate of the University of Wyoming, he is a Navy veteran who fought fires at sea during three deployments aboard USS Constellation. He’s been a reporter for daily newspapers in California, Washington, Wyoming, New York, and Florida; a staff writer for Manhattan-based business trade publications.

Zachary Stieber
Reporter
Zachary Stieber covers U.S. and world news. He is based in Maryland.
Source
US News
Share
0
FacebookTwitterLinkedinRedditWhatsappEmail