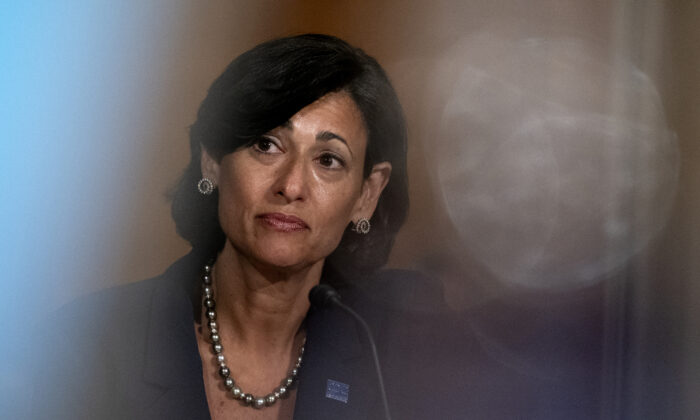 Dr. Rochelle Walensky, director of the Centers for Disease Control and Prevention (CDC), testifies during a Senate hearing in Washington, on July 20, 2021. (Stefani Reynolds-Pool/Getty Images)

A federal court on Friday ruled that the U.S. Centers for Disease Control and Prevention (CDC) overstepped its authority by halting evictions during the COVID-19 pandemic.

The Cincinnati-based U.S. Sixth Circuit Court of Appeals unanimously agreed (pdf) with a lower court ruling that said the CDC engaged in federal overreach with the eviction moratorium, which the agency has consistently extended for months. Several weeks ago, the CDC announced it would allow the policy, which was passed into law by Congress, to expire at the end of July.

“It is not our job as judges to make legislative rules that favor one side or another,” the judges wrote. “But nor should it be the job of bureaucrats embedded in the executive branch. While landlords and tenants likely disagree on much, there is one thing both deserve: for their problems to be resolved by their elected representatives.”

The ruling upheld one handed down by U.S. District Judge Mark Norris, who in March blocked enforcement of the moratorium throughout western Tennessee.

Under the moratorium, tenants who have lost income during the pandemic can declare under penalty of perjury that they’ve made their best effort to pay rent on time. The CDC claimed the measure was necessary to prevent people from having to enter overcrowded conditions if they were evicted, which would, according to the agency, impact public health.

Previously, the CDC’s lawyers argued in court filings that Congress authorized the eviction freeze as part of its COVID-19 relief legislation, while simultaneously asserting that the moratorium was within its authority. Those arguments were rejected by the three-panel appeals court on Friday.

But last month, the Supreme Court in a 5-4 decision rejected a different plea by landlords to end the ban on evictions.

Justice Brett Kavanaugh had written in an opinion (pdf) that while he believes that the CDC had exceeded its authority by implementing the moratorium, he voted against ending it because the policy is set to expire July 31.

“Those few weeks,” he wrote, “will allow for additional and more orderly distribution” of the funds that Congress has appropriated to provide rental assistance to those in need because of the pandemic.

The CDC moratorium has faced pushback from property owners as well as the National Association of Realtors.

“Landlords have been losing over $13 billion every month under the moratorium, and the total effect of the CDC’s overreach may reach up to $200 billion if it remains in effect for a year,” said the organization in an emergency petition to the Supreme Court.

It’s not clear if the CDC’s attorneys will appeal the ruling. The Epoch Times has requested a comment from the agency.