Former MP: The Legacy David Kilgour left behind was that of a person of utter principle and moral courage 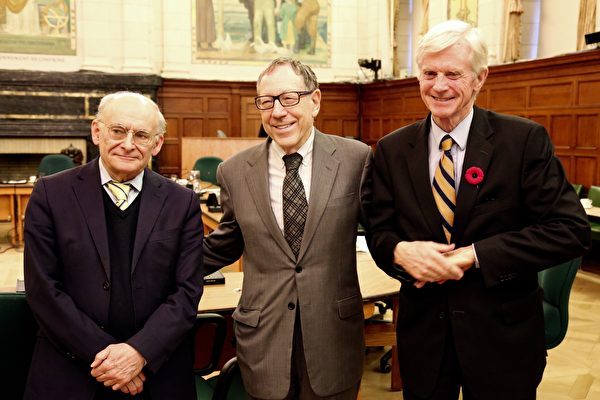 Ottawa – Former justice minister Irwin Cotler recalled David Kilgour who passed away earlier this month, as “the great, not only Canadian statesman of our time, but a world statesman, a person who advanced the wellbeing of the human condition as a whole.”

In an interview with New Tang Dynasty TV, former Minister of Justice Irwin Cotler said that in 1968 when he was serving as a special assistant to then minister of justice, John Turner, he met David Kilgour who was working as a senior council in the department of justice.

“I was impressed then with his commitment to constitutionalism and human rights and our friendship began, then it continued for the next 50+ years,” said Cotler.

Cotler said the two worked closely with regard to the struggle for Soviet Jewry. Kilgour became the chair of parliamentarians for Soviet Jewry, and “really was a hero of the movement for human rights in the former Soviet Union.”

And then when Cotler got elected to parliament in November 1999, the two “renewed our involvement in the struggle for human rights and in working jointly as parliamentarians,” according to Cotler.

Cotler said that David Kilgour was somebody who really inspired all people within and without parliament.

After his retirement in 2006,  David Kilgour, along with international human rights lawyer David Matas, spearheaded an independent investigation into allegations that Falun Gong practitioners had been killed to supply China’s organ transplant industry and concluded that “there have been and continue today to be large-scale organ seizures from unwilling Falun Gong practitioners”.

The Davids traveled to about 50 countries to raise awareness of the situation. They were nominated for the Nobel peace prize for their work. It was later determined by an independent tribunal, that the persecution and organ harvesting of Falun Gong practitioners to have been a “crime against humanity”.

“I rarely met a more principled parliamentarian at the forefront of the struggle for human dignity. So, we have lost, not only Canadians have lost, but the international community has lost an extraordinary voice.”

“I hope we can continue to be inspired by that voice, by the memory of his advocacy, and make that memory really serve as a blessing for us, because he was a role model of someone who sought always to better the human condition, and never in any partisan political way, but for the collective good, for the protection of human dignity,” said Cotler.

“The legacy he left behind was that of a person of utter principle and moral courage.”

No Back Pay for Civil Servants on Unpaid...

Parliamentarians Express Frustration Over Lack of Answers From...