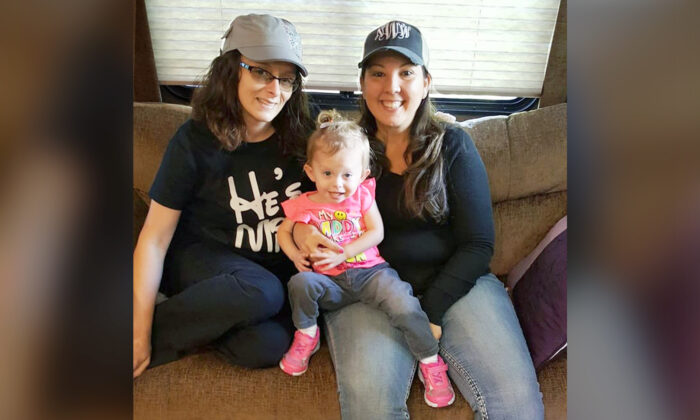 An unlikely friendship between a mom suffering long-term drug addiction and the woman who fostered her daughter has changed all three lives, and many more by association.

Not only has former addict Heather Bone beaten her demons, but she has earned back custody of her child, Kristina.

Heather struggled with drugs since the age of 13, eventually becoming addicted to heroin and prescription medication. After using meth while pregnant in 2014, her weeks-old baby girl, Kristina, was taken into child protective custody, reported The San Diego Union-Tribune.

Nanci—who herself was adopted by a family in 1975 when she was 2 months old—and her husband David of Encinitas, California, became Kristina’s court-appointed foster parents.

“As a mom, I can only put myself in the shoes of, ‘What would that feel like?’” she said in an interview with ABC 13.

Nanci supervised visits between the birth mom and her baby girl. Both moms felt trepidation, but Heather liked Nanci immediately. She said Nanci reminded her of herself “if I didn’t end up so messed up.”

Heather told The San Diego Union-Tribune that she and her husband, Andy Tarnovsky, had planned to snatch Kristina and make a run for it.

“But the more we got to know [Nanci], the more we realized we couldn’t do something like that to this woman. She was too nice,” Heather said.

The two women struck up a friendship based on mutual care and compassion, yet behind closed doors, Heather’s drug habit was escalating.

Still, Heather proved her commitment to her daughter. She never missed a visitation, and Nanci felt compelled to help her friend get sober.

Nanci, David, Heather, and Andy supported one another wholeheartedly when Kristina was diagnosed with a rare condition, craniosynostosis. Her skull plates were fused, preventing brain growth, and she needed major surgery, reported The San Diego Union-Tribune.

Talking to ABC13, the foster mom refers to her breakthrough moment with Heather as “the miracle in McDonald’s,” a moment of frank conversation in relaxed surroundings that changed the course of both women’s lives.

Heather was not yet in rehab and knew the clock was ticking, but when Nanci told her she was “worthy of being a mother,” the tears fell freely.

Owing to Heather’s immense respect for Nanci, the message stuck.

“Addiction knows no socioeconomics. It knows no race, knows no gender,” Nanci told ABC 13. “So, why couldn’t it be me?

“I may not always agree with some of the decisions that the bio parent has made, but I can still treat them with compassion,” she added.

By the time Kristina had her first surgery in January 2015, Heather was attending rehab. She achieved sobriety, regained custody of her daughter, and moved to Texas to start over with Andy, Kristina, and the couple’s younger daughter, Emma.

Nanci and David, who share two biological daughters, have since adopted a boy, formerly a foster child. They remain in California.

Today, Heather’s love for her kids is all the motivation she needs to stay sober. She and Nanci, the woman whose love and friendship made recovery possible, speak weekly.

“If it had been anyone else, I don’t think I’d be here today because I wouldn’t have survived the path I was on,” Heather told The San Diego Union-Tribune. “We were brought together for a reason.”

Share your stories with us at emg.inspired@epochtimes.com, and continue to get your daily dose of inspiration by signing up for the Epoch Inspired newsletter at TheEpochTimes.com/newslette