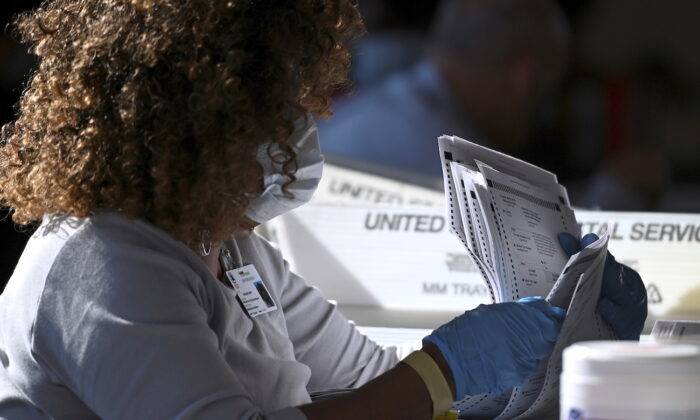 An employee of the Fulton County Board of Registration and Elections processes ballots in Atlanta, Georgia, on Nov. 4, 2020. (Brandon Bell/Reuters)
BY ZACHARY STIEBER

Georgia officials are probing the handling of the presidential election in the state’s largest county.

Officials are seeing “managerial sloppiness” and “chain of custody” issues in Fulton County, which has a population of about a million and includes Atlanta, Gabriel Sterling with the secretary of state’s office told reporters on Tuesday.

One probe centers around a reported burst water pipe on Election Day at State Farm Arena, where workers were tallying mail-in ballots.

“We had an investigator there who had left and we sent somebody back. So there may be a time period where not everything was looked at at one time. And that’s what we’re trying to get down to,” Sterling said.

“That’s why we’re looking at the video from State Farm and trying to get down to what exactly the timeline was, and making sure that there was an observer there, and if there wasn’t, then we have to account for why that was, and who made those decisions internally at Fulton to say, ‘It’s time for you people to go.’”

The other investigation is focusing on whether workers entered credit for people voting in a timely manner.

By not doing so, it left people confused as to whether their mail-in ballot was received or not, Sterling said.

Fulton County may face a $50,000 fine, Sterling acknowledged in a separate briefing on Tuesday.

A Fulton County spokeswoman said officials there were aware of Sterling’s comments.

“Our own after-action analysis has been delayed by the last week’s decision to implement a hand-recount of 528,000 ballots. However, we have made every effort to be transparent throughout this election cycle, and have previously addressed the subjects of both investigations,” Jessica Corbitt told The Epoch Times in an email.

The water leak took place at 6:07 a.m. at State Farm and within two hours the damage was repaired, according to the county. No ballots or equipment were damaged and there was only a brief delay in tabulating ballots.

On Election Night, the director of registrations and elections ordered staff to work through the night to process ballots but observers were not told to leave, Corbitt added.

Georgia counties were engaged in a recount this week because the margin between Democratic presidential nominee Joe Biden and President Donald Trump, a Republican, fell within 1 percent.

“For Floyd County, they literally had a box of ballots that no one even scanned. So they were off to the side, and there would never been a record of a tabular being produced there wasn’t accounted for. So there was no backstop because of that decision, or that lack of a decision that was made. In Fayette County, they had them scanned, and they had the ballots, they had both sides of the equation. But in their practices at the end of doing their reconciliation, they failed to do the reconciliation properly,” Sterling told reporters.

There may have been a memory card in Walton County that wasn’t counted, he added.

According to the unofficial count as of Tuesday at 4 p.m., Biden led Trump by under 14,000 votes in Georgia.

Trump’s campaign said that the uncounted ballots “have shown that President Trump was absolutely correct to raise concerns about widespread voting irregularities that have favored the Biden-Harris ticket.”

“By not counting these ballots, the state of Georgia incorrectly tilted its election results toward Joe Biden and hurt President Trump. Georgia officials must continue with their recount efforts to ensure that the American people know the true outcome of the 2020 presidential election, and the Georgia recount must include a thorough matching of signatures. The state of Georgia must not certify its results until the recount is done accurately and the results are correct,” the campaign added.

Sterling said finding the uncounted ballots was “irritating to a degree because you want to be spot on as you go.”

Officials plan on certifying the results by the end of the week, he said.