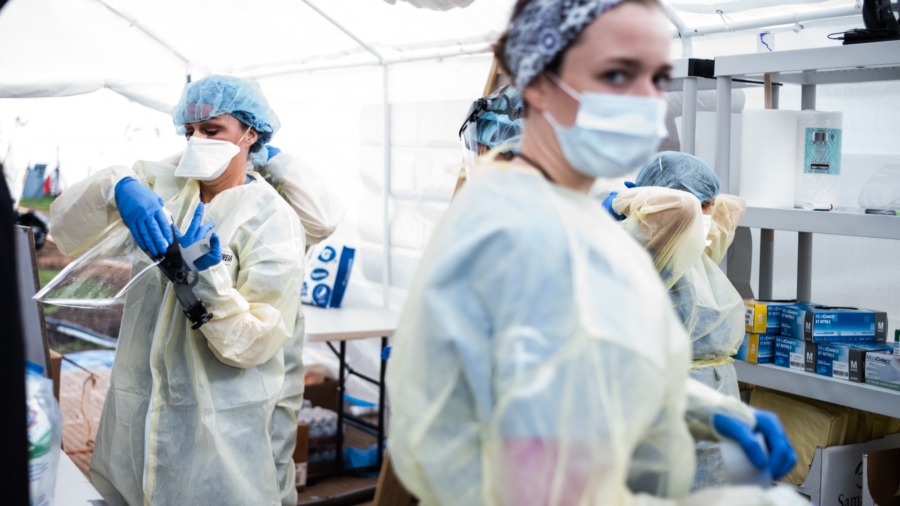 Medical workers putting on PPEs at the beginning of their shift at the emergency field hospital run by Samaritan’s Purse and Mount Sinai Health System in Central Park in New York, on April 8, 2020. (Misha Friedman/Getty Images)

New York saw a net increase of just 200 hospitalized COVID-19 patients, officials announced Thursday, another day of figures suggesting the state has reached its peak in the pandemic.

Only 84 patients were admitted to intensive care units in the last 24 hours, the lower number seen since the middle of last month.

If New York did reach the peak of hospitalizations and new cases, the plateau is significantly lower than nearly every model predicted. One projection officials were aware of, from Columbia University, said New York City alone could need 136,000 hospital beds on the most serious day while other models estimated as many as 110,000 beds would be required across the state.

Instead, New York has about 18,000 patients in hospital beds and saw the lowest daily increase of hospitalizations since March 18. The number of ventilators needed—once projected to be as high as 40,000—has also reached nowhere near the upper estimate. Cuomo’s office has not answered multiple queries about how many ventilators the state now needs.

New York did see 799 new deaths, the largest single day increase. Deaths are a lagging indicator, with many patients succumbing after spending weeks on ventilators.

The bulk patients who have died have been 70 or older. Many had at least one underlying health condition, including hypertension, diabetes, and cancer.

The drop in hospitalizations doesn’t mean social distancing measures can be loosened, Cuomo said, warning of a possible “second wave.” The state has been on lockdown since last month, with increasingly harsh measures including fines being raised for violating the governor’s executive order and playgrounds being shut down.

Businesses deemed non-essential were forced to close and people are largely at home, with rare trips only for essential purposes like getting groceries.

Antibody tests, which can detect past infections and are being developed, will enable people who have already had the CCP (Chinese Communist Party) virus, commonly known as novel coronavirus, or who are immune to return to work, the governor said.

New York City Mayor Bill de Blasio said at his own press conference earlier Thursday that some of the city’s restrictions could be lifted in May.

“I think it’s going to be a long tough April. May might be easier than what I originally feared it would be,” he said at Gracie Mansion.

New York is the most affected state in the nation. It has the most cases, hospitalizations, and deaths. Officials waited weeks to implement measures like a stay-at-home order and were encouraging New Yorkers to attend parades, events, and eat out into March.