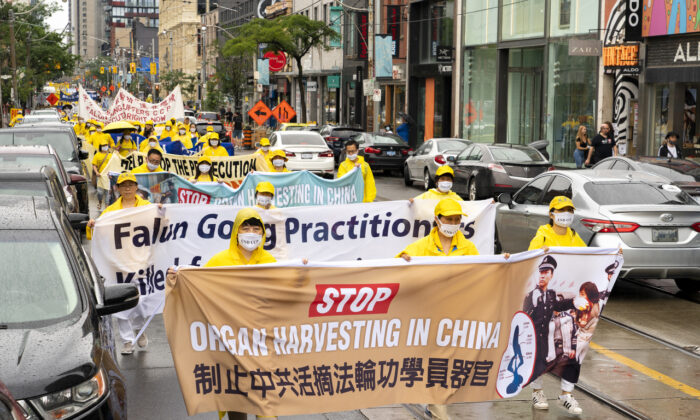 Speaking at a rally in Toronto on July 17, former parliamentarians and rights activists voiced support for Falun Gong adherents amid the ongoing persecution of the spiritual practice launched by the Chinese Communist Party (CCP) 22 years ago.

Over 500 Falun Gong adherents participated in a parade through the city’s downtown to commemorate the victims of the largest human rights abuse in China. At least 500 people registered online for the parade, but roughly 700-800 people showed up, said Jeffery Jiang, one of the organizers.

At the rally in Queen’s Park, former Conservative MP Wladyslaw Lizon called on Canada, the United States, and Europe to help those who “demand rights and change in the communist system” as in the past they helped people living in the Soviet Union.

“This gives hope, and it should give hope to all of us and to those that are here today, persecuted by this terrible communist government in China,” Lizon said.

“We should remind not only the communist government of China of their crimes, [but] remind them that the times to answer for those crimes is coming.”

Falun Gong is a spiritual practice that includes meditation exercises and teachings based on the tenets of truthfulness, compassion, and tolerance. Also called Falun Dafa, the practice was introduced in 1992 in China, where it gained widespread popularity due to its benefits to people’s mental and physical well-being. By 1999, it had attracted 70-100 million adherents, according to Chinese government estimates.

CCP leader Jiang Zemin perceived that popularity as a threat to the regime’s rule. On July 20, 1999, Jiang launched an unprecedented campaign and brutal oppression aimed at eradicating the practice.

Former senator Consiglio Di Nino urged the CCP to open up to media and public scrutiny of the persecution of Falun Gong.

“If you have any decency, if you have any respect for humanity, if you really want to tell us that these things are not happening, open up to reporters, to the media,” Di Nino said. “What are you hiding? Why are you not allowing the media to come in and take a look?”

Warmth of ‘Compassion’ Will Persevere

Former MPP and Toronto city councillor John Parker invoked the story of “The North Wind and the Sun,” one of Aesop’s Fables, as an analogy to the CCP’s campaign against Falun Gong.

In the fable, the wind, which was jealous of the sun for its warmth and happiness, challenged it to a contest of strength to see who could remove the cloak worn by a man walking along the road.

The wind blew up a destructive storm, destroying everything along its path, but the man held tightly to his cloak. When the sun took its turn, it beamed brightly and warmed up the man who eventually took off the cloak voluntarily.

Sheng Xue, co-founder of the China Rights Network, a group that unites communities that have suffered under the CCP, said history will remember Falun Gong as the “light” that fought against the “darkness” of the regime.

“Falun Gong is the light [that] fights against the darkness, … and every practitioner is a light. When people in the future look back to our time, they will see you, especially those who give up their lives for their beliefs,” Sheng said.

Gloria Fung, president of Canada-Hong Kong Link, noted that the CCP is also responsible for atrocities inflicted on Uyghurs, Tibetans, and other minority groups in China. She said the CCP is undermining Western democracies through “manipulation, infiltration, intimidation, as well as hostage taking,” such as the two Canadian citizens, Michael Kovrig and Michael Spavor, imprisoned in China.

“The Chinese Communist Party rules by lies and violence. It brainwashes its population with a very sophisticated mechanism of ideological control,” Fung said.

She said Canada and its western allies are starting to realize that the CCP is not just a competitor, but “an adversary” on all fronts, and she called on the government to introduce stronger measures against the regime, such as boycotting the 2022 Beijing Winter Olympics.

The Brutality of the Persecution

Shenli Lin, a Falun Gong practitioner who made headlines when he was rescued to Canada in 2002 after suffering years of torture and brutality in a Chinese labour camp, shared his experience at the rally.

Lin was arrested in 1999 when he appealed for the right to practise after the CCP launched its campaign against Falun Gong. He was detained several times and ultimately sentenced to two years of “re-education through labour.”

During his time in the labour camp, he was forced to do slave labour for long hours, which resulted in ulcers all over his body. He said he was also forced to undergo medical examinations “for the sinister purpose of preparing me for live organ harvesting.”

Shenli Lin’s brother, Mingli Lin, also endured torture, brainwashing, and forced labour, and was left with permanent damage to his windpipe due to being force-fed while on a hunger strike. Mingli was rescued to Canada in 2012. Lin’s 76-year-old sister, Qiu Peng Lin, was also arrested in China for practising Falun Gong and has not been heard from since May 2020.

“The history of the Chinese Communist Party is the history of murder. The CCP treats life as if it were grass, and slaughtered 80 million Chinese people,” Lin said.

“I therefore call on the Canadian government, and all good people, to continue extending your helping hand. Let us all raise our voices for justice to stop the CCP’s persecution of Falun Gong.”

Archbishop to Pelosi: Devout Catholics Do Not Support...