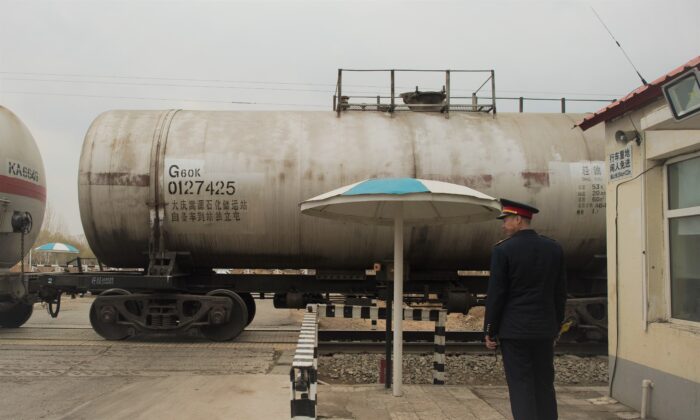 An officer watches an oil transporting train at a railway crossing in Daqing, China, on May 2016. (Nicolas Asfouri AFP via Getty Images)

Calgary Mayor Naheed Nenshi, a number of Calgary city officials, several academics, and a now-former mayor of St. John’s are all on a list of targets that Chinese officials hope to influence to further the communist regime’s interests.

The list, disclosed in a leaked government document recently obtained by The Epoch Times, reveals names spanning a wide range of sectors and countries in which the Chinese regime seeks to “cultivate talent.”

The document was issued by the Foreign Affairs Office of the municipal government of Daqing, a city in northeastern China.

Daqing’s Foreign Affairs Office states in the 2019 document that it would start an initiative called the “one hundred overseas talent cultivation plan.”

It’s a program found in many other local governments in China, as well as within the central government. A 2019 report by the U.S.–China Economic and Security Review Commission listed several national-level talent programs that have “recruited or repatriated tens of thousands of individuals to China,” and stated that hundreds of such programs exist at the local government level as well.

In the leaked document, although the office doesn’t explain how it would carry out its plan, nor the plan’s specific goals, it listed 129 “overseas” individuals it wished to recruit.

The document contains only the first name for some of those individuals, but each entry states the person’s current or former job positions, career fields, and contact information.

The list consists of 19 people in Canada, 13 of whom are based in Calgary. Besides Nenshi, the list includes a number of other senior city officials, along with Derek Zhao, who at one point was in charge of the China initiative at Calgary Economic Development, a not-for-profit corporation partly funded by the city and other government partners. Other targets are academics, a University of Calgary senior administrative official, and senior executives with a number of Calgary-based businesses.

The City of Calgary is a sister city of Daqing, also an energy hub.

A spokesperson for Nenshi told The Epoch Times that the mayor was not aware he was on any list.

“While Daqing has been one of Calgary’s sister cities since 1985, Mayor Nenshi has had no personal contact with city officials,” Adam Noble-Johnson, the mayor’s communications strategist, said in an email.

The Epoch Times contacted Calgary Economic Development and the mayor’s office in St. John’s but didn’t hear back.

The list has targets that span the globe, including people in the United States, New Zealand, United Kingdom, Pakistan, Spain, and the current mayor of the small city of Esbjerg in Denmark. The Epoch Times contacted the Esbjerg mayor but received no reply. Two former mayors of the Australian city of Perth were also included.

According to China commentator and Epoch Times contributor Heng He, the Chinese Communist Party (CCP) dubs its city partnerships as “citizen diplomacy.”

Heng says that the Chinese organization in charge of promoting ties between Chinese and foreign cities—the Chinese People’s Association for Friendship with Foreign Countries (CPAFFC)—has senior Party officials among its ranks and “is a proxy of China’s Ministry of Foreign Affairs.”

“In this way, in addition to the official embassy and consulate, CCP foreign affairs agencies have added a quasi-diplomatic organization that isn’t on the list of diplomatic envoys and isn’t regulated by foreign governments,” he says.

According to Heng, the friendship city can be “co-opted” to perform tasks that further the CCP’s interests without being noticed. This includes “united front work,” the CCP’s term for efforts to influence people and organizations overseas to promote its agenda, Heng says.

Scholars Clive Hamilton and Mareike Ohlberg write in their new book, “Hidden Hand,” that Chinese officials use sister city arrangements to build personal relationships. These can then be “weaponized” when a city plans activities that go against CCP positions, such as deals with Taiwan or meetings with the Dalai Lama.

The CCP uses a strategy dubbed as “using the countryside to surround the cities,” note Hamilton and Ohlberg. This strategy originates from the time before the CCP came to power in China in 1949, when the Party retreated to the countryside and surrounded the cities in its fight against the rival Nationalist Party.

“This slogan should not be understood only in the literal sense; the idea is to go to areas where the CCP’s enemies are weak or not well represented, organize the population there, and then use them to encircle the enemy’s strongholds,” the book says.

Connections with these local politicians can then be leveraged to pressure national governments.

In 2010, when Richard Fadden was head of the Canadian Security Intelligence Service, he said that a number of provincial and municipal politicians in Canada were suspected of being under the influence of foreign governments.

Other security experts and China analysts also support that position.

“The CCP will carefully identify where the centres of political, economic, and cultural power lie, and who are the most powerful people in those areas,” Hamilton, a professor of public ethics at Charles Sturt University in Canberra, told The Epoch Times in a previous interview.

“It will then attempt to create a profile of each person and find a way to approach them to draw them into the CCP world.”

Hamilton said the CCP is very good at “disguising its operations,” hiding behind ideas such as “people-to-people exchanges” or “win-win cooperation and building economic linkages.”

“Mostly the elites themselves are duped by this strategy, because the CCP plays on their weaknesses. It appeals to their desires and their hopes.”

Beijing has a number of programs to target people with specialized skills to work for the benefit of the regime. One such program is the Thousand Talents Plan, which lures overseas Chinese and foreign experts into its science and tech sectors.

Earlier this year, U.S. federal prosecutors arrested Charles Lieber, chair of Harvard University’s chemistry and chemical biology department at the time, for allegedly lying about his participation in the Thousand Talents Plan.

The Epoch Times has obtained other documents from the Daqing city government  that show how authorities keep a tight leash on citizens who travel abroad, and how they’ve started tracking expats living in China and monitoring their health status.

In one document dated Feb. 29, the Daqing office kept a record of over 180 foreigners in the city, including exchange students, teachers, and foreign experts. These expats came from a variety of countries such as Canada, the United States, Chad, Morocco, Zimbabwe, South Africa, Taiwan, Sweden, the U.K., and Australia.

The document states that local health officials were monitoring these individuals’ health status due to the pandemic, and showed their detailed personal information, such as passport numbers, birthdays, and current residential addresses in China.

Another document, dated April 9, is a “daily work report,” which updated the number of foreigners who were either working or studying in Daqing.

Still another document warned that Chinese officials who travel overseas on business trips are at risk of having their political ideologies changed. The Daqing office set out specific guidelines for these people, both before they leave and after they return to China.

Before embarking on their overseas trips, they must sign a pre-departure letter and undergo training given by the Daqing’s state secrecy bureau, the document says.

Daqing’s state security bureau also provides “education lessons” to these people before and after their overseas business trips.

With reporting by Cathy He