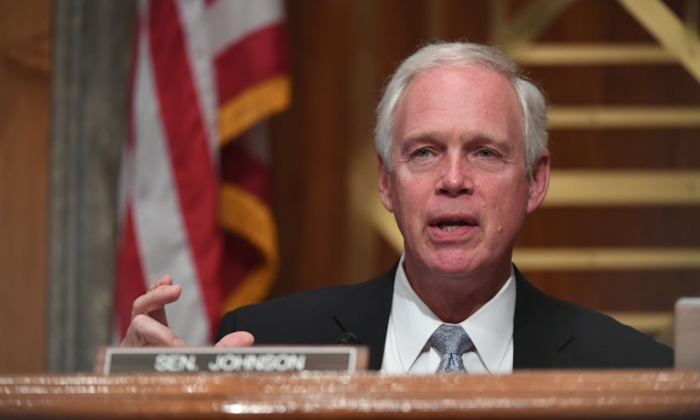 Sen. Ron Johnson (R-Wisc.) on Friday requested that the Department of Justice inspector general investigate the wiping of iPhones used by members of the special counsel team which ran the Russia investigation.

“These reports are troubling and raise concerns about record retention and transparency,” Johnson wrote in a letter to the DOJ Inspector General (IG) Michael Horowitz on Sept. 11.

“Therefore, I respectfully request that your office open an investigation into this matter to determine what, why, and how information was wiped, whether any wrongdoing occurred, and who these devices belonged to.”

Documents released by the DOJ on Sept. 10 include a log of devices showing that multiple employees wiped their phones before the devices can be reviewed to determine if they contained government records. An Epoch Times analysis of the log shows that at least 27 and as many as 31 iPhones were wiped.

Johnson also asked to whether Horowitz is already aware of the matter and whether it is possible to retrieve text messages from the phones. He asked the IG to respond by Sept. 18.

Sen. Chuck Grassley on Friday demanded more information about the wiping of the phones from the DOJ and the FBI.

“It appears that Special Counsel Mueller’s team may have deleted federal records that could be key to better understanding their decision-making process as they pursued their investigation and wrote their report. Indeed, many officials apparently deleted the records after the DOJ Inspector General began his inquiry into how the Department mishandled Crossfire Hurricane,” Grassley wrote in a letter to Attorney General William Barr and FBI Director Christopher Wray in reference to the investigation opened by the FBI that was taken over by Mueller.

“Moreover, based on this new information, the number of times and the stated reasons for the deletions calls into question whether or not it was a widespread intentional effort.”

The special counsel iPhone log shows that data was completely wiped from at least 27 iPhones, including at least two which were wiped twice. On 11 occasions, special counsel employees said they wiped the data on their phones by accident. On seven other occasions, employees wiped their devices claiming they input the wrong password too many times causing the phone to wipe itself. On two occasions, the phone apparently wiped themselves.

The Department of Justice’s (DOJ) Office of Inspector General (IG) had in 2018 detailed an extensive effort to recover the text messages from the special counsel phones used by FBI Deputy Assistant Director Peter Strzok and FBI attorney Lisa Page. The phones had both been wiped before the IG investigators found them.

Page and Strzok texted each other about their hatred of Trump, wanting to stop him from becoming president, and an “insurance policy” in the event he was elected. Strzok was removed from the special counsel’s office when the IG informed Mueller about the messages.

Infographic: The 4-Year-Long Campaign Against Trump

In Georgia Recount, Signatures Must Be Verified—Jenny Beth...

VIEWPOINTS The Thieves Who Stole Our Election Got...

Recounts Needed to Settle Dominion’s Role, and the...

Trump Says He Will Never Concede to ‘Fake...