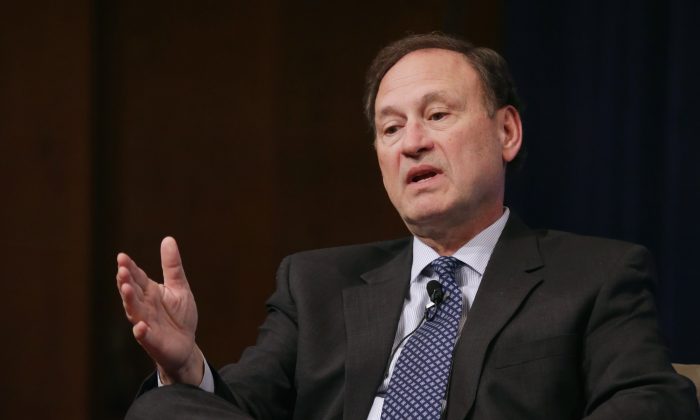 Supreme Court Justice Samuel Alito received a standing ovation from a hall full of lawyers at a black-tie dinner on Nov. 10 for authoring the landmark legal decision that overturned Roe v. Wade, the 1973 high court ruling that legalized abortion nationwide.

The court ruled 5–4 in Dobbs v. Jackson Women’s Health Organization on June 24 that there is no constitutional right to abortion and returned the regulation of abortion to the states. The decision prompted protests at justices’ homes, a foiled attempt to assassinate Justice Brett Kavanaugh, and targeted harassment of justices in public by left-wing groups.

The comments took place at a heavily guarded Union Station in Washington at the 40th-anniversary gala banquet for the Federalist Society, a conservative-constitutionalist lawyers’ group that has grown increasingly influential in recent years in the judicial confirmation process. Politico estimated the crowd in attendance at 2,000.

“The Dobbs decision will forever be an indelible part of Justice Alito’s legacy,” Markham said to cheers during the dinner.

“I don’t know of any decision, on any court, by any judge, of which that judge could be more proud of that legacy,” he said.

Alito, who was appointed by former President George W. Bush, did not reference the Dobbs decision, instead offering lighthearted anecdotes about the group.

“Boy, is your work needed today,” Alito said. “Congratulations to the Federalist Society on 40 years.”

Alito recounted attending a lunch hosted by the group at Tony Chang’s, a Chinese-Mongolian restaurant in Washington. He pulled a fortune from a fortune cookie from his pocket, saying he saved it from a lunch years ago.

“I am going to read the fortune. … I hope it will foretell the future of the Federalist Society,” Alito said. The fortune, according to the justice, said, “‘You will flourish and grow and travel to all parts of the country. You will spread wisdom and civility, and you will live as long as your work is needed.’”

One of the more publicly outspoken justices, Alito told a Heritage Foundation audience on Oct. 25 that the Dobbs decision painted a bulls-eye on the backs of conservative justices, making them “targets for assassination,” as The Epoch Times previously reported.

An early version of Alito’s draft majority opinion in Dobbs made its way to the media, an unprecedented leak of a full high court opinion. Politico published the draft document on May 2 without disclosing its source.

The leak “was a great betrayal of trust by somebody,” Alito said. While suspicions and theories abound, the identity of the leaker or leakers is still unknown. Supreme Court officials say they are investigating the leak.

“It certainly changed the atmosphere at the court for the remainder of the last term,” he added.

In brief remarks at the same Nov. 10 event, Justice Barrett, who has been pursued by pro-choice protesters for months, quipped, “It’s really nice to have a lot of noise made not by protesters outside of my house.”

Barrett, who also received a standing ovation, said she signed up with the Federalist Society as a professor at Notre Dame Law School, and that she has “benefited immensely” from her membership in the group.

Emel Akan contributed to this article.