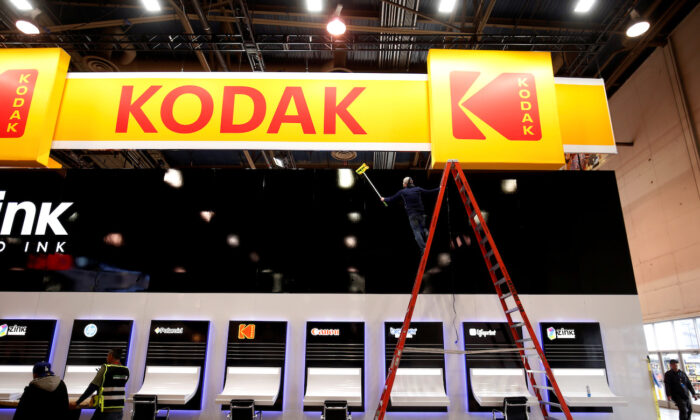 A worker cleans a Kodak booth at the Las Vegas Convention Center in preparation for 2019 CES in Las Vegas, Nevada, on Jan. 6, 2019. (Steve Marcus/File Photo/Reuters)
The federal loan was to support domestic manufacturing of pharmaceutical ingredients
BY MIMI NGUYEN LY

“Recent allegations of wrongdoing raise serious concerns,” the U.S. International Development Finance Corporation (DFC), an independent U.S. government agency that provides financing for private development projects, announced late Friday on Twitter. “We will not proceed any further unless these allegations are cleared.”

The agency had signed a letter of interest with Eastman Kodak on July 28 to provide the company with a $765 million loan. President Donald Trump announced the deal on the same day.

The federal loan was intended to launch Kodak Pharmaceuticals to produce active pharmaceutical ingredients for generic drugs, to help reduce the United States’s reliance on other countries. The deal marked Trump’s 33rd use of the Defense Production Act.

Kodak shares skyrocketed more than 1,100 percent just two days after the deal’s July 28 announcement. It reached a high of $60 a share on July 29.

A statement sent on behalf of Kodak to The Epoch Times on early Tuesday reads, “The Company appreciates and supports the DFC’s decision to await clarification before moving forward with the process.”

Kodak announced on Aug. 7 that it has started an “internal review of recent activity by the company and related parties in connection with the announcement of a potential loan by the U.S. International Development Finance Corporation to support the launch of Kodak Pharmaceuticals.”

“The company does not intend to make further public comment on the committee’s work during the pendency of the review,” Kodak’s statement read.

“There were several instances of unusual trading activity prior to the announcement of this deal, raising questions about whether one or more individuals may have engaged in insider trading or in the unauthorized disclosure of material, nonpublic information regarding the forthcoming loan awarded under the Defense Production Act,” Warren wrote in her letter (pdf).

The Wall Street Journal on July 29 reported that local media outlets in Rochester, New York, may have published some articles and Twitter posts about the deal before the official announcements by Trump and the DFC on July 28.

According to the WSJ report, Kodak reportedly sent a news advisory to news outlets ahead of the official announcement, and did not indicate that news of the $765 million loan deal was not intended to be released until later.

On Aug. 4, the outlet reported, citing anonymous sources, that the SEC was investigating the situation.

When asked on Aug. 4 to comment on reports that the SEC had opened an investigation into the Kodak deal, Trump said, “We’ll do a little study on that, and we’ll find out … If there is any problem, we’ll let you know about it very quickly, but I wasn’t involved in it.”