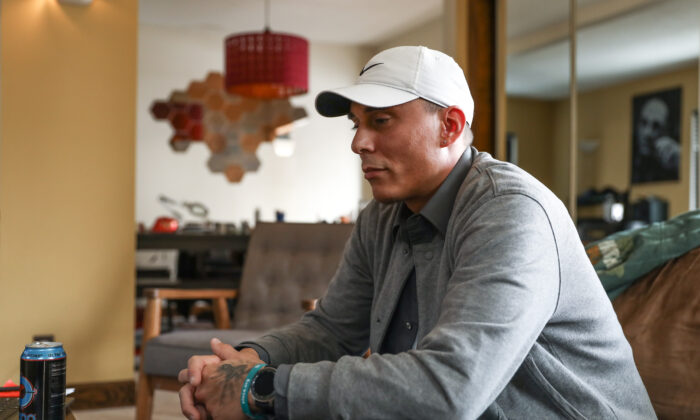 MINNEAPOLIS—Overseeing sober living homes for newly recovering drug addicts is difficult in the best of times. But the endless shutdowns have created conditions that are challenging for healthy people, let alone those who are fresh out of rehab, vulnerable, and still reeling.

Matt Royce, 35, oversees seven sober-living homes in Minneapolis. All of his houses, each holding between 9 and 13 people, have been “pretty full the whole time.”

No overdose deaths had occurred in his homes in almost three years, but last summer he lost two people, while another three were revived from overdoses with opioid-blocker Narcan.

Depression has “skyrocketed” since the lockdowns began, Royce said. Recovering addicts are struggling even more now due to boredom, inability to see family and friends, and lack of social activities.

“A lot of these guys, they just need the simple things in life. And when they’re prohibited from being able to get those things, it’s tough,” Royce said.

“Hopefully this changes sooner rather than later, because I can’t even tell you how many times I was dealing with relapses every single day of the week … heavily, heavily from June all the way until about October. It was non stop. It was definitely more than normal, there’s no doubt about that.”

In lockstep with widespread shutdown measures, overdose deaths accelerated, especially between March and May last year, according to an emergency health advisory issued by the Centers for Disease Control and Prevention (CDC) on Dec. 17, 2020.

“This represents a worsening of the drug overdose epidemic in the United States and is the largest number of drug overdoses for a 12-month period ever recorded,” the CDC stated.

“It’s very, very sad what’s going on,” Royce said. “I wish that I could reach in my pocket and give everybody a little piece of what I was able to grasp onto and let everybody know that ‘You’re not in this alone. Just hold on.’”

Royce will be four years drug-free on Feb. 20.

He started smoking pot at age 13 and dabbled in “party drugs” such as cocaine and mushrooms until he discovered opioids.

“I didn’t try drugs just for the fun of it. I tried drugs because I wanted to escape life. And even at 13 years old, I hated life,” he said.

At 21, an appendix surgery sent Royce into a 10-year spiral with prescription opioid painkillers.

“They gave me 160 10-milligram percocets—which is insane. I mean, nobody in this world needs that much for the surgery that I went through. I can literally recall back to only needing maybe two or three [pills],” he said.

“It was literally within the first 20 or 30 of those pills for sure that I was completely hooked. In  just under two weeks, that prescription was out and I was able to refill another 100.

“I was hooked on those things for … 10 straight, miserable years of my life.”

It was fairly easy for Royce to get his hands on more pills after the refills ran dry, as his extended family was supplying them. That helped keep him out of jail and conviction-free, which is uncommon for a decade-long opioid addiction. It was also one reason he avoided heroin. Eighty percent of new heroin users begin their addiction with painkillers. Eventually the cost gets too high or it’s hard to source the pills, and users turn to heroin.

Toward the end of his addiction, Royce was taking opioids and methamphetamines. He was living with his girlfriend, also an addict, and their two little girls, aged 5 and 18 months.

He said he remembers being unable to get up off the couch to make a bowl of cereal for his daughters.

Like many opioid addicts, Royce perceived death to be a more favorable option than going through withdrawals.

“In my withdrawals, I would go into convulsions. I would literally shake nonstop until I was able to finally get my fix,” he said.

“Each drug has its own anchor, but the opiates, I mean, I’ve never felt anything powerful like that before in my life. The only out I saw was death.”

Royce’s father provided the impetus he needed to change his life.

“I’ll never forget that morning. My father knocked on the door and he said, ‘Either you get your [expletive] together right now, or I’m taking your kids and you’ll never see them again,’” Royce said. “And I believed my dad, because he’s not one to just say [expletive] and not do it.”

Royce knew he had to get sober on the first go, because he had seen so many people cycle through the system, relapse after relapse.

“I see it all the time where people think that they have another round in them, and they don’t,” he said.

The treatment center Royce attended was a 16-bed facility.

“I had 15 other peers in there with me, and six of them are dead right now. And only two of them are doing well. The rest are on drugs or in jail still. That’s how powerful this [expletive] is.”

Royce doesn’t buy into the well-worn narrative that addicts need to go to rehab many times before finally breaking free of drugs.

“So many people just fall victim to the statistics … blame the statistics in order to screw up again and into thinking that they have another round out there,” he said.

“No, we don’t have another round in us. And it’s a miracle if somebody does and makes it to treatment again. It’s a miracle.”

After successfully completing his treatment, Royce moved to a sober living house and was starting to see his girls again. He got a job in a warehouse and played basketball at the local court. But sober living homes can be precarious places. The house manager relapsed and started shooting up heroin with everyone except Royce and one other person.

Royce begged the treatment center to step in, and they eventually did, making him the house manager. He cleaned up the house, and over the next few months, he realized he was good at counseling the other residents when they came to him.

At one-year sober, the mindless warehouse job gave way to a job at the treatment center, and Royce knew he’d found his calling. Then days later, one more incident cemented his drive to help other addicts.

Royce was called home at 11 a.m. one morning to meet with an inspector. Two of his housemates told him that another housemate had been in the bathroom for two hours. Royce knocked on the door. No response. He banged and yelled. No response. He kicked the door down and found the man slumped over the toilet; his face was purple, and he was foaming at the mouth.

“I grabbed the Narcan and I proceeded to give him three Narcan [shots] in his thigh. And the third Narcan, all of a sudden, I heard him take a gasp of breath. And that, seeing him come to, it brought this overwhelming sense of relief, sadness, and anger all at the same time,” Royce said. The paramedics arrived, and the man survived.

“I went into a mild panic attack because I couldn’t believe that there was a life that was literally in my hands.

“I’d never seen an overdose. I’d never seen almost death like that before in my life. So that was very, very fresh to me. And that was for sure the defining moment for me as far as why I do what I do. Not only for myself and my daughters, but for others as well. Because other people have kids and other people have family members that depend on them and that want to see them succeed.”

Helping others and dealing with those who relapse solidifies Royce’s resolve to never return to that lifestyle. He sees his girls almost every day and has a close relationship with his father, as well as with the girls’ mother (who also got clean).

“And I see that all the time, unfortunately.”

Mental health experts have been warning officials for months about the effects that lockdowns have on drug use and suicide rates.

During a May 19 Cabinet meeting in the White House, Dr. Elinore McCance-Katz implored officials to consider the impact.

“To put all of this in perspective, I believe it is important to point out that, pre-pandemic, we lose 120,000 lives a year to drug overdose and suicide. How many more lives are we willing to sacrifice in the name of containing the virus?” said McCance-Katz, assistant secretary for mental health and substance abuse at the Substance Abuse and Mental Health Services Administration (SAMHSA). She’s also a psychiatrist and holds a doctorate in infectious disease epidemiology.

The number of calls to SAMHSA’s Disaster Distress Helpline increased 1,000 percent for the month of April 2020, compared to April 2019.

“As a psychiatrist, I would argue that a life lost to suicide is just as important as a life lost to coronavirus,” McCance-Katz said. “I ask that you take into account whole health, not just one narrow aspect of physical health.”