Lone Democrat Explains Why He Sided With Republicans Against H.R. 1 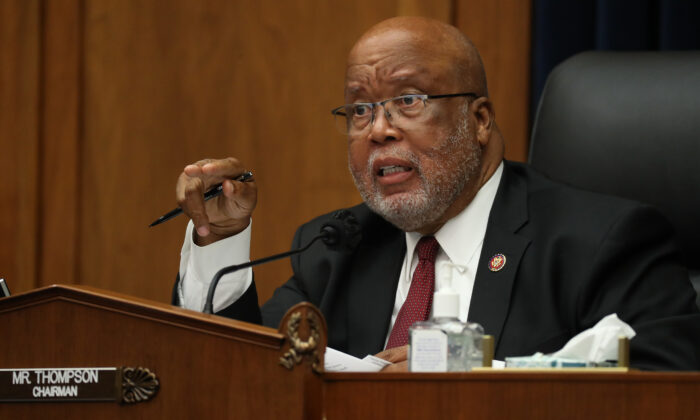 Every Democrat but one voted late March 3 for H.R. 1, a massive voting reform bill that has drawn harsh criticism from the GOP.

Every Republican voted against the bill. They were joined by Rep. Bennie Thompson (D-Miss.).

Thompson told The Epoch Times that he heard from constituents who opposed certain portions of the legislation.

“My constituents opposed the redistricting portion of the bill as well as the section on public finances. I always listen and vote in the interest of my constituents,” he said in an emailed statement.

H.R. 1 would require congressional redistricting to be conducted through independent commissions, or a three-judge court.

Membership on the commissions would be open to any citizen of the state through an application process, barring people who have held or hold office, candidates for office, and people who have worked on political campaigns.

Six members would be chosen by “a nonpartisan agency established or designated by a State,” the bill states.

Two from each party, and two independents, would be chosen on a random basis from the approved selection pool.

Those members would then appoint three other members from each of the two major parties and three independents.

Commission members would be banned from “drawing maps to favor a political property” and would be required to meet other criteria in deciding where lines go. They would also have to hear from the public before approving a final map.

Another section deals with campaign finance.

The legislation condemns the Citizens United Supreme Court decision and calls for amending the Constitution “so that Congress and the States may regulate and set limits on the raising and spending of money to influence elections and may distinguish between natural persons and artificial entities, like corporations, that are created by law, including by prohibiting such artificial entities from spending money to influence elections.”

Additionally, it would reduce the number of members on the Federal Election Commission and limit those who could serve on the commission.

Republicans on the House floor before the vote denounced the bill, including portions that would require funding for campaigns.

“Americans love election season. They love the endless political acts, having their phones blown up by political calls and texts, having their email inboxes littered with solicitations from wannabe politicians. My phone keeps ringing off the hook from all of my constituents just pleading for Congress to use their dollars to fund more campaign ads. This is the fantasy world that government bureaucrats and career politicians who want a federal takeover of our elections live in,” Rep. Carlos Gimenez (R-Fla.) told colleagues.

“They want to take Americans’ money and give it to campaigns in a 6:1 ratio, effectively forcing you to support political campaigns you don’t support.”

But Democrats said the bill would bring necessary changes to elections.

“As a former voting rights attorney, I have seen firsthand the devastation on the faces of Americans when they are denied their ability to make their voice heard in our elections because they missed an arbitrary deadline or showed up to their old polling place. It’s heartbreaking and not who we are as nation,” Rep. Colin Allred (D-Texas) said.

“On today’s vote, we as a Congress have the opportunity to affirmatively expand access to voting. This bill would do so by allowing for automatic and same-day voter registration and establishing a national early voting period while also enacting key reforms that will make our elections more secure and will ensure Americans and only Americans take part in them.”