Canada’s fiscal situation has deteriorated significantly over the course of the government’s response to the pandemic. The feds’ latest report on the nation’s finances argues that Canada’s strong fiscal position coming into the health crisis had allowed the government to spend ambitiously by international standards to counter COVID-19. However, worrying realities mar that narrative.

The government on July 8 delivered its first official fiscal update since last December. ”Economic and Fiscal Snapshot 2020” detailed the plethora of support programs and what might have been the state of affairs had it not done so.

Direct spending to support businesses and individuals amounted to some $212 billion—more than 10 percent of gross domestic product (GDP). However, according to the Organisation for Economic Co-operation and Development (OECD), Canada has the highest unemployment rate among the G7, at 13.7 percent, Conservative leadership candidate Erin O’Toole tweeted on July 7.

“Based on our strong fiscal position going into this … we should be proud of where we’re at,” Finance Minister Bill Morneau said during an embargoed press conference in response to a question from The Epoch Times regarding the unemployment rate.

No Plans for Next Phase of Recovery

Morneau said the government’s approach is to make the necessary investments to support Canadians and jobs—to simply restart the economy. He added that the feds are better able to take on additional debt than households and businesses.

Ottawa also has not planned for the next phase of the recovery and economic expansion. “We’re not going to make assumptions of the future that we can’t know today,” he said.

Neither did Morneau address plans for getting the deficit under control such as via spending cuts or tax hikes.

The government provided forecasts for just one year, saying that considerable uncertainty prevents it from giving a five-year forecast as is traditionally found in the budget or an end-of-year fiscal update. The update said private-sector economists expect GDP to drop 6.8 percent in 2020 before jumping by 5.5 percent in 2021.

The size of the deficit alarmed Conservative Leader Andrew Scheer, who said his party has also been putting forward solutions to help Canadians.

“Over the past five years, the Trudeau Liberals have completely abandoned their fiscal anchors. The debt-to-GDP ratio is rising, the deficit has exploded to $343.2 billion, and they have completely lost control over the federal debt, which for the first time will reach over $1 trillion this year,” Scheer said in a statement.

The rating agency Fitch downgraded Canada’s long-term credit rating to double-A-plus from the pristine triple-A on June 24, which serves as a warning to the government that there is a financial risk to the deterioration in public finances.

Fitch said Canada will emerge from the recession in much worse shape financially. Total government debt—including all levels of government—will rise to 115.5 percent in 2020 from 88.3 percent in 2019 as a proportion of the economy.

Comparing debt to GDP based on this metric, Canada ranks among the weakest for Fitch double-A-rated countries. Looking at the measure of interest expense as a share of revenue, it stands at 2.7 percent for the middle-ranked double-A country, while Canada’s is about three times higher, at 7 percent.

Fitch acknowledged that Canada has shown an ability to right the fiscal ship, as it did during the economic and fiscal struggles of the 1990s, but said that with provincial financial needs climbing because of the pandemic, getting general government debt under control will be a challenge.

“This increases downside risks to Fitch’s expectation that general government debt will broadly stabilize beyond 2021,” according to Fitch’s press release.

The demands on provinces and the feds don’t stop there, as the municipal level is also suffering, for example due to lost transit revenues as a result of people working from home or losing their jobs. Municipalities have lost some $10 billion in revenue, said Federation of Canadian Municipalities (FCM) president Bill Karsten, speaking with BNN Bloomberg on July 7.

“We need that funding that we had lost through revenues—through COVID. We need that money to flow immediately,” Karsten said, adding that the municipalities are reliant on provinces to work with the feds to get them the funding they need. Hiking property taxes or cutting services aren’t options municipalities want to impose on Canadians. 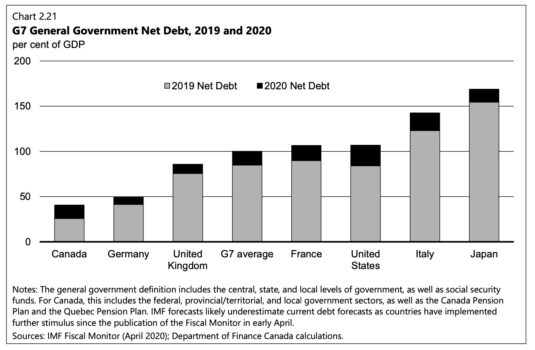 The credit-rating downgrade has not yet punished the feds with higher borrowing costs in the way a bank might penalize a borrower with a lower credit score. BMO explained that financial markets already saw the downgrade coming, and when combined with other factors affecting longer-term interest rates, such as the Bank of Canada’s bond buying, it is not expecting higher rates anytime soon.

What may seem counterintuitive is that given the massive government spending, the interest expense on the debt actually falls noticeably. This is due to the historically low interest rates on the new debt. The government can borrow money for 10 years at less than 0.8 percent. The snapshot made note of the more than $4 billion in interest savings as compared to the forecast in last December’s fiscal update.

At some point the government will need to address the deficit and deal with the buildup of debt. But many are saying that tax increases should be held off until the economy is in much better shape.

RBC president and CEO Dave McKay, speaking at the online Collision tech conference on June 25, urged policy-makers not to raise taxes immediately to reduce the deficit.

Others suggest a gradual belt-tightening, including BMO and the Fraser Institute.

A 2019 report by the think tank said people’s response to personal income tax hikes has a critical impact on the expected revenue. High-income earners especially have the ability to do more tax planning to reduce their taxable income. The report cites a study showing that a 1 percentage point increase in the top tax rate resulted in a decrease of about 0.5 percent in total taxable income.

Canada’s personal income tax rates are already among the highest in the world, and its business tax rate is now higher than that of the United States.

“We are unlikely to reverse the one-time damage to debt-to-GDP,” said BMO economists Doug Porter and Robert Kavcic in a July 3 note. Canada will have to live with a higher level of debt and risk having to refinance it at higher rates in the future.