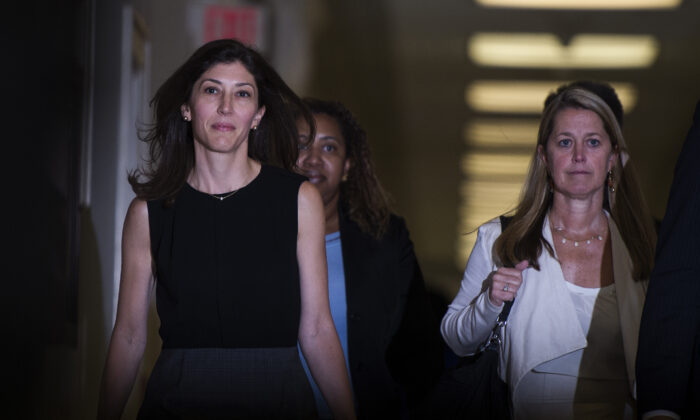 An official who worked on special counsel Robert Mueller’s Russia investigation wrote in a recently released email that he or she was in possession of an iPhone belonging to Lisa Page three days after the former FBI lawyer’s last day on the job and at a time when the device was thought to have been lost.

The special counsel’s office (SCO) and the Justice Department previously claimed to have no documents to show who handled Page’s iPhone after she turned it in on July 14, 2017, or who improperly wiped it two weeks later, before it could be checked for records, in violation of SCO policy.

But documents released by the Department of Justice (DOJ) on Sept. 11 tell a different story, with three officials certifying that Page turned over her phone and one claiming to have been in possession of it.

“I have her phone and laptop,” an administrative officer with the initials LFW wrote in a July 17, 2017, email to Christopher Greer, an assistant director at the DOJ Office of the Chief Information Officer (OCIO).

Beth McGarry, the executive officer at the special counsel’s office, told Greer in an email sent earlier in the day that Page “returned her mobile phone and laptop.”

On the same day, a property custodian officer, whose name is redacted in the documents, signed a form on which Page certified that she turned in her phone and the officer certified that “all government property has been returned or otherwise properly accounted for.”

The July 17 timing of the two statements and the signature is significant. The DOJ Office of Inspector General (OIG) previously concluded that there were no records of who had the phone after July 14.

The records about Page’s phone are part of a DOJ disclosure that revealed that members of the Mueller team improperly wiped at least 22 iPhones before they could be checked for records.

“These irregularities with the phones of Mueller investigators are either sloppiness or the deliberate destruction of evidence—and it’s probably not sloppiness,” Rep. Devin Nunes (R-Calif.), ranking member of the House Select Committee on Intelligence, told The Epoch Times in an email.

On July 14, Page’s last day at the SCO, McGarry met Page to fill out her exit clearance form. Page checked a box on the form to certify that she “surrendered all government-owned property, including … cellular telephones.” McGarry signed the same form but later told the OIG that “that she did not physically receive Page’s issued iPhone.”

Page told the inspector general that she “had left her assigned cell phone and laptop on a bookshelf at the office on her final day there.”

McGarry left the special counsel’s office for the private sector in March 2019, according to her LinkedIn profile.

“The DOJ OIG investigated the circumstances of the mobile phone issued to Lisa Page by the Special Counsel’s Office,” McGarry told The Epoch Times in an email, referring to the December 2018 OIG report. She didn’t immediately respond to a follow-up query about how to reconcile differences between the findings of the report and the new documents.

The OIG, which interviewed the records officer, McGarry, Page, and LFW for the report, told The Epoch Times that the new documents aren’t at odds with its findings.

“We stand by the information in our text message report about Page turning in the device on July 14,” Stephanie Logan, a senior public affairs specialist at the OIG, wrote in an email to The Epoch Times.

The report concluded that neither Mueller’s office nor the DOJ “had records reflecting who handled the device or who reset it after Page turned in her iPhone on July 14, 2017.”

Page’s phone notably never made it into the hands of the special counsel’s records officer, who told the OIG that she never received the phone to examine it for any government records that would need to be retained.

“Phone not found,” the records officer noted in a log she kept about the records on the phones assigned to the special counsel’s office staff.

The DOJ found the device more than a year later and turned it over to the OIG, which determined that all of the data was deleted from the device on July 31, 2017.

The records officer’s log shows that Page’s iPhone wasn’t the only device to elude an examination for government records. A total of at least 22 iPhones with unique asset tags used by the Mueller team were wiped before the records officer could review the contents, according to an Epoch Times review of four inventory logs and various forms released on Sept. 11.

The Mueller team offered a number of excuses for the deletions. Two people claimed the phones wiped themselves. Others said they erased all the data by accident or had to do so because they forgot their passwords. Andrew Weissmann, a prosecutor, wiped his iPhone twice.

Mueller’s team used a total of 92 iPhones, according to the documents. Four of the phones appear in the inventory logs, but not on the records officer’s log, suggesting they were either recorded without their unique asset tag or evaded the officer entirely. One of the four phones belonged to deputy special counsel Aaron Zebley. Another belonged to Zainab Ahmad, a special counsel attorney.

The pattern of questionable deletions has drawn the attention of lawmakers. Sens. Chuck Grassley (R-Iowa) and Ron Johnson (R-Wis.), the chairmen of the finance and oversight committees, respectively, sent a letter to the DOJ and the FBI last week asking for more information about what happened with the phones.

“It appears that Special Counsel Mueller’s team may have deleted federal records that could be key to better understanding their decision-making process as they pursued their investigation and wrote their report,” Grassley wrote. “Indeed, many officials apparently deleted the records after the DOJ Inspector General began his inquiry into how the Department mishandled Crossfire Hurricane.”

Crossfire Hurricane is the FBI codename for the investigation of the 2016 Trump campaign; Mueller took over the probe in May 2017.

Five months after Page left the special counsel’s office, the DOJ authorized a leak of 375 text messages between Page and Strzok, triggering a media firestorm over what the pair discussed. The initial and the subsequent releases of the texts showed that they expressed hatred for Trump and had a clear preference for his rival, former Secretary of State Hillary Clinton. Strzok told Page that “we’ll stop” Trump from becoming president, discussed an “insurance policy” in case Trump won the election, and mused about impeachment around the time he joined the Mueller team.

Page’s attorneys didn’t immediately respond to a request by The Epoch Times for comment.

The OIG discovered the biased Page-Strzok texts during an inquiry into the handling of the FBI’s investigation of the Trump campaign. After the inspector general informed Mueller of the texts in late July, Mueller removed Strzok from the Russia investigation. Former FBI Deputy Director Andrew McCabe told lawmakers that he learned of the text messages on July 27 and made the decision to remove Strzok the same day. Someone wiped Page’s phone four days later.

Strzok and Page played key roles in the FBI’s investigations of both the Trump campaign and Clinton’s use of an unauthorized email server. The OIG concluded that their bias cast a cloud over the email probe but didn’t ultimately influence the outcome of the investigation.

The OIG began looking for the phones belonging to Page and Strzok after being informed of a six-month gap in the text messages it had recovered. The inspector general received the pair’s four FBI Samsung phones in late January 2018.

On Jan. 26, 2018, Greer reached out to LFW to ask where Page’s SCO iPhone was, because the OIG wanted to speak to the official about the device.

“Yes. I know it is missing. We discovered that first,” LFW wrote back.

The DOJ tracked down the phone eight months later, in early September 2018 and handed it over to the OIG. The records officer later contacted the inspector general to find out if the phone was wiped.

“Yes that’s correct, the device had been reset to factory settings,” the OIG official wrote back.

Three months later, in December 2018, the OIG released the report on its hunt to recover additional text messages Page and Strzok sent on six phones they used, four of which were assigned by the FBI. The effort resulted in the discovery of hundreds of text messages, but none came from the special counsel’s office phones, both of which were wiped before investigators recovered them.

The following January, DOJ officials reached out to Verizon with a request for billing statements to check how many messages Page and Strzok sent on their special counsel’s office phones. Verizon responded by saying no text messages were sent, with a caveat that data did leave the device. Verizon’s report didn’t cover the most common way to send a message on an iPhone—the iMessage app—which uses an internet connection rather than the carrier’s text service.

“Both numbers did have data usage so it could mean that if any messages were sent, it could have been through some type of app but we would not know for sure from our end,” a message from Verizon stated.

Mueller concluded his 22-month investigation having found no evidence of collusion between the Trump campaign and Russia.