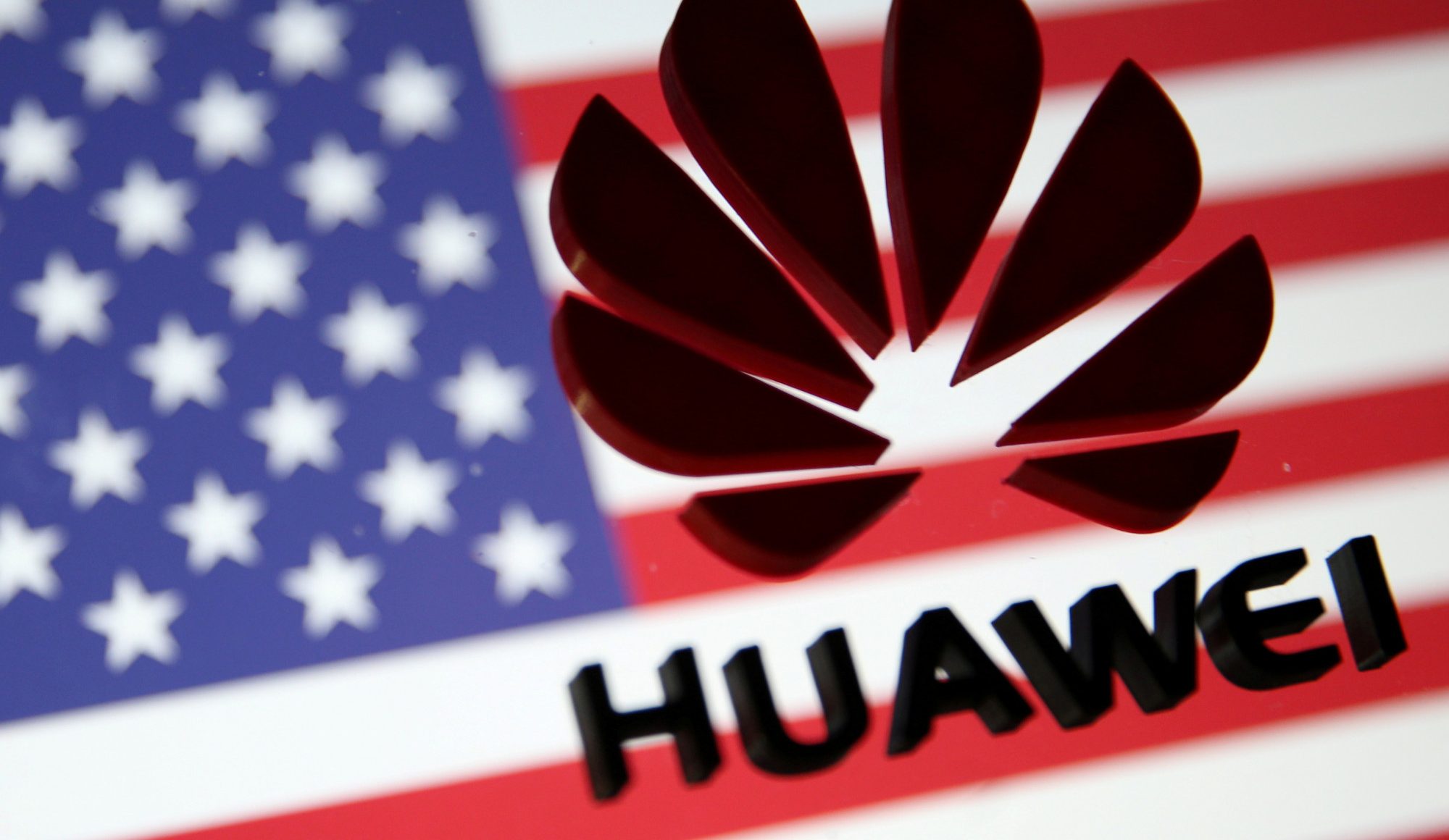 A 3D printed Huawei logo is placed on glass above displayed US flag in this illustration taken on Jan. 29, 2019. (Dado Ruvic/Illustration/Reuters)

SHANGHAI/SEOUL—Ramped-up U.S. restrictions on Huawei are likely to choke the Chinese company’s access to even off-the-shelf chips, threaten its position as the world’s largest smartphone maker, and disrupt global tech supply, executives and experts warned.

The Trump administration expanded its curbs on Huawei on Monday and banned suppliers from selling chips made using U.S. technology to the firm without a special license—closing potential loopholes in its May sanctions that could have let Huawei access the tech via third parties.

The curbs underscore the growing rift in Sino-U.S. ties as Washington presses governments to squeeze Huawei out over fears the company would hand over data to Beijing for spying. Huawei denies it spies for China.

“If the choking of Huawei continues there will be reverberations across the semiconductor complex,” said Neil Campling, head of TMT research at Mirabaud Securities. “And the retaliation from China remains unknown and a significant risk.”

The tech giant’s business has suffered since America first blacklisted it a year ago.

If Huawei cannot source chipsets as a result of the expanded curbs, its “handset business will likely disappear,” Jefferies said in a note.

Other brokerages, including JP Morgan, echoed that view, adding this would give players such as Xiaomi and Apple an opportunity to increase their market share.

Huawei did not respond to requests for a comment.

Earlier this month, Huawei flagged it would stop making its flagship Kirin chipsets from September because U.S. pressure on its suppliers had made it impossible for its HiSilicon division to keep making the chipsets that are key components in mobile phones.

The U.S. ban represents a setback for chip suppliers too, at least in the near term, as they have to apply for licences that comply with the new rules, experts said.

It is yet unclear how many suppliers require these licences and whether they will get them.

Shares in MediaTek, which counts Huawei as a major customer, slumped 10 percent on Tuesday.

MediaTek said it was monitoring new developments of rules to remain in compliance, but that it did not expect a material impact to near-term operations, based on available information.

In Europe, German chipmaker Infineon, which counts Huawei as a key customer for its power management products, and Austrian sensor specialist ams said they were reviewing the impact of the latest U.S. restrictions.

European tech stocks were firmer, however, reflecting their relatively low exposure to Huawei, which accounts for 7 percent of sales at ams, 3 percent at Infineon and 4 percent at STMicroelectronics, according to figures cited by Mirabaud’s Campling.

Who Will Be the Winners?

Several questions remain about the how the new curbs will be implemented, and how hawkish a stance Washington plans to take.

For example, a semiconductor vendor would “potentially be required to know where all its products end up so they do not engage in any transaction where a Huawei affiliate might be a purchaser, intermediate consignee, ultimate consignee or end-user,” political risk consultant Eurasia Group said in a note.

But there are likely to be some winners in the longer term if Huawei is forced to relinquish its spot as the world’s largest smartphone maker.

“Huawei currently has 45-50 percent market share in China and, if this becomes vulnerable, Xiaomi, along with Oppo and Vivo, are likely to be the biggest beneficiaries,” JP Morgan analyst Gokul Hariharan said, referring to Chinese smartphone makers.

“Huawei would also be likely to lose further ground in the international smartphone space and 5G base stations, both of which could benefit Samsung. The Apple food chain could also benefit from potential iPhone share gains.”

TSMC, which has said it would not ship wafers to Huawei after Sept. 15, will be slightly hurt in the long run, Bernstein said in a note. “TSMC is ‘everybody’s foundry’ eventually.”

The ban is also likely to affect U.S. chipmakers such as Qualcomm, but those losses are likely to be offset in the longer term as Huawei’s rivals gain ground, analysts said.

By Josh Horwitz and Hyunjoo Jin

NTD News contributed to this report.