Opinion: Looking Through an Adversary’s Eyes: A KGB Agent’s Prophecy 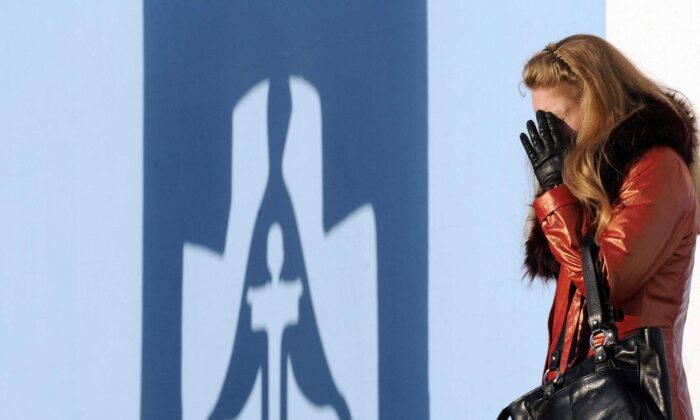 A young woman cries as she visits the Holmodor Memorial in Kiev on Nov. 11, 2008. The Holmodor was the famine organized by Stalin in which 7 million Ukrainians perished. (Sergei Supinsky/AFP/Getty Images)

Human beings have a weakness: It’s easy for us to see others’ problems, but not our own. Actually, most of us are nearly blind to our own problems.

However, if we examine how our enemies look at us, some insights may be revealed.

For many people right now, the aftertaste of the 2020 presidential election is bitter. They feel that something is very wrong with our country. But what is it?

For current events, it may be useful to look through the eyes of an adversary that many thought had been vanquished: the USSR in the 20th century.

The Prophecy of a KGB Agent

I came across a YouTube video of a 1985 interview of Yuri Bezmenov, a KGB agent who defected to the West in 1970. The interview is about the Soviet Union’s strategy to subvert the United States. It is eye-opening and I wish to share a quote here first:

“Marxism-Leninism ideology is being pumped into the soft heads of at least three generations of American students, without being challenged or counter-balanced by the basic values of Americanism and American patriotism … The demoralization process in the United States is basically completed already … Most of it is done by Americans to Americans thanks to lack of moral standards.

As I mentioned before, exposure to true information does not matter anymore. A person who was demoralized is unable to assess true information. The facts tell nothing to him. Even if I shower him with information, with authentic proof, with documents, with pictures. Even if I take him by force to the Soviet Union and show him concentration camp he will refuse to believe it until he is going to receive a kick in his fat bottom. When the military boot crashes him, then he will understand, but not before that. That’s the tragic of the situation of demoralization.”

It’s scary to watch the video (More video here and here). What Bezmenov described 35 years ago is unfolding in front of our very eyes. To me, what is most alarming is that the demoralization is mostly “done by Americans to Americans due to lack of moral standards.” Actually, as Bezmenov pointed out, “For the last 25 years, actually it’s over-fulfilled because the demoralization now reaches such areas where previously not even Comrade Andropov [KGB leader during 1967–1982] and all his experts would even dream of such a tremendous success.”

According to Bezmenov, only 10 to 15 percent of the KGB’s personnel and resources were allocated to traditional clandestine espionage in James Bond’s style, with the rest going to “legitimate, overt, and open” ideological subversion. He said that subversion happens in four stages: demoralization, destabilization, crisis, and “normalization.”

The first stage, lasting for about 15 to 20 years, the period of time needed to raise a generation, is to brainwash the public with communist ideology. Manipulation of the media and academia is required for this purpose.

The second stage focuses on throwing society into chaos, and it usually takes two to five years. During this stage, the status quo in economy, foreign relations, and defense systems are changed. The establishment promises all kinds of goodies in order to win people’s support for creating a massive government that is intrusive to people’s lives. Media and academia are also essential to make it successful.

The third stage instigates a crisis that leads to a civil war, revolution, or foreign invasion. This stage only took two to six months. This is the stage when the leftist idealists, or “useful idiots,” are no longer needed, because they would be disillusioned and become obstacles. They are going to be eliminated, exiled, or imprisoned, such as what has happened in Grenada, Afghanistan, Bangladesh, and China.

“It is the same pattern everywhere,” Bezmenov said.

These three steps culminate in the fourth and final stage of “normalization”—the populace begins to accept and assimilate communism. This final stage can take up to 20 years to complete.

Today, 35 years after the interview, Bezmenov’s chilling prophecy still sounds so relevant. According to annual polls by the Victims of Communism Memorial Foundation, support for socialism and Marxism among young people in the United States increases steadily. Actually, that’s happening in all Western countries. Ambitious proposals like the “Great Reset Initiative” are aiming to change the world fundamentally in economy, international relations, and defense systems, and establish global governance, which sounds like Bezmenov’s stage two, destabilization.

The United States is lauded as the beacon of democracy and freedom. But our once-proud institutions based on the Constitution and the separation of powers seem so powerless under the stress test of the 2020 presidential election. The deep frustration and distrust of the system cannot be dissipated by political intimidation, or deliberate ignoring of evidence-based allegations of irregularities. Many people are deeply worried about our country’s future.

“The United States is in a state of war. Undeclared total war against the basic principles and the foundations of this system … The time bomb is ticking. Every second, the disaster is coming closer and closer. Unlike myself, you will have nowhere to defect to unless you want to live in Antarctica with penguins. This is it. This is the last country of freedom and possibility,” Bezmenov said.

How did we get this far almost unknowingly?

The Surreptitious Path of Infiltration

Sen. Ted Cruz (R-Texas) once commented about the law school of a prestigious university he attended: “There were more self-declared communists [in the faculty] than there were Republicans. … If you asked [them] to vote on whether this nation should become a socialist nation, 80 percent of the faculty would vote yes and 10 percent would think that was too conservative.”

The amazing book, “How the Specter of Communism Is Ruling Our World,” gives a comprehensive analysis of the nonviolent infiltration of communism in the West. In 1884, a year after Karl Marx’s death, the British Fabian Society was founded to bring about communism gradually. It encourages its members to advance socialist aims by joining suitable organizations and ingratiating themselves with important figures, such as Cabinet ministers, senior administrative officials, industrialists, university deans, and church leaders.

Since then, many American intellectuals began accepting communist ideas or its Fabian socialist variant.

The 1960s counterculture movement produced a large number of young anti-traditional students who were influenced greatly by cultural Marxism and Frankfurt School theory. After graduation, they entered the institutions with the most influence over society and culture, such as universities, news media, government agencies, and nonprofits. What guided them at that time was mainly the theory of “the long march through the institutions” proposed by Italian Marxist Antonio Gramsci.

This “long march” aimed to alter the most important traditions of Western civilization. As a result, generations of young people have been indoctrinated with the communist ideology.

Why Are Intellectuals So Prone to Communism?

Intellectuals tend to be fooled by radical ideologies. This phenomenon has drawn the attention of scholars. British historian Paul Johnson found that radical intellectuals share the fatal weaknesses of arrogance and egocentrism.

This arrogance is exhibited in a statement by 19th-century French politician and art critic Jules-Antoine Castagnary: “Beside the divine garden from which I have been expelled, I will erect a new Eden … At its entrance, I will set up Progress … and I will give a flaming sword into his hand and he will say to God, ‘Thou shalt not enter here.’”

Rapid scientific progress since the 18th century greatly strengthened humankind’s confidence in its own ability and fueled the intellectual trend of progressivism. People started to worship humanist reason instead of God. Reason is believed to be able to lead people to the path of happiness and morality. People want to create a utopia, a “paradise on earth,” which is the essential idea of communism.

As the “pastors” of modern science, intellectuals believe that they are the interpreter of the truth, and their cause is so important that no means are off-limits to serve their ends. This has caused a deluge of blood and misery.

What Can We Do?

Two hundred years of experimenting with human pride and reason has led to the declining of morality and the loss of tens of millions of lives due to the ravages of communism.

Founding Father John Adams said: “Our Constitution was made only for a moral and religious People. It is wholly inadequate to the government of any other.” Interestingly enough, a ruthless communist dictator, Joseph Stalin, echoed his point from another angle, “America is like a healthy body and its resistance is threefold: its patriotism, its morality, and its spiritual life. If we can undermine these three areas, America will collapse from within.”

It’s time for us to be humble again, look inward, and follow the true wisdom of righteous spiritual beliefs. This is our only solution.

Jean Chen is originally from China, and writes under a pen name in order to protect her family in China.