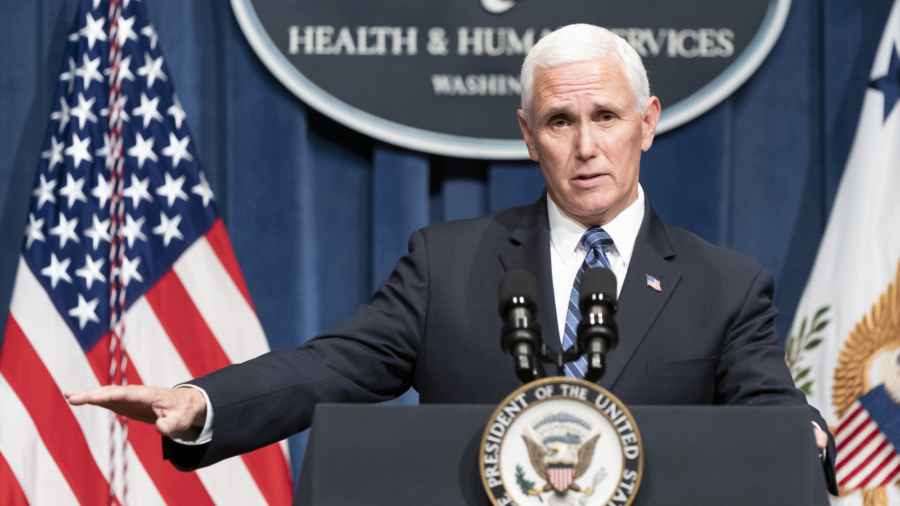 Leaders in the Black Lives Matter movement are pushing a radical agenda, Vice President Mike Pence has alleged, citing how activists want to defund the police.

Pence, a Republican, was pushed repeatedly during an appearance on CBS’ “Face the Nation” on why he won’t say “black lives matter,” a phrase that activists say is a way of elevating concerns over what they describe as systemic racism.

“I cherish the progress that we have made toward a more perfect union for African Americans throughout our history. And I’ve aspired throughout my career to be a part of that ongoing work. It’s really a heart issue for me,” Pence said.

“And as a pro-life American, I also believe that all life matters, born and unborn. But what I see in the leaders o f the Black Lives Matter movement is a political agenda of the radical left that would defund the police, that would—”

CBS reporter John Dickerson interrupted, saying: “Leave that out of it. Just the phrase.”

Pence continued, saying: “—tear down monuments, that would would press a radical left agenda that, and support calls for the kind of violence that has beset the very communities that they say that they’re advocating for.”

“I’ve literally met with African American leaders around this country and in the national capital area who’ve—who made it clear to us they—they want law and order. They want peace in our streets,” Pence added.

The Black Lives Matter Global Network, a global nonprofit that was founded in 2013 after George Zimmerman was acquitted of murder in the killing of Trayvon Martin, didn’t respond to a request for a response to Pence.

The group says it’s mission “is to eradicate white supremacy and build local power to intervene in violence inflicted on Black communities by the state and vigilantes.”

Black Lives Matter activists are pushing to defund police departments across the United States and some have said they want the departments abolished, a situation that’s unfolding in Minneapolis.

Leaders in the movement have declined to condemn the rioting and looting that’s taken place in tandem with protests over alleged police brutality and racial injustice.

Hawk Newsome, a New York-area leader of the group, drew criticism, including from President Donald Trump, after saying last week: “If this country doesn’t give us what we want, then we will burn down this system and replace it.”

Trump called the remarks treasonous. Newsome told The Epoch Times that he’s open to meeting with the president.

The Trump administration has taken a number of steps since the death of George Floyd, an unarmed black man, in Minneapolis on Memorial Day. Pence met with black leaders in a number of states while the president met at the White House with relatives of minorities who have been killed in recent years, primarily by police officers, before signing an executive order on police reform.

Both have declined to use the phrase “black lives matter.”

A reporter in Philadelphia about a week ago tried multiple times to get Pence to say it.

“Let me just say that what happened to George Floyd was a tragedy. And in this nation, especially on Juneteenth, we celebrate the fact that from the founding of this nation, we cherish the ideal that all of us are created equal and endowed by our creator with certain inalienable rights. And so all lives matter in a very real sense,” Pence said.

“It’s the reason why President Trump in the wake of that tragic event in Minneapolis said that justice would be served. We’ve met with law enforcement leaders. We’ve met with African American leaders.”

“I don’t accept the fact, Brian, that there’s a segment of American society that disagrees in the preciousness and importance of every human life,” he added when the reporter, Brian Taff with ABC 6, continued trying to get Pence to say the phrase.