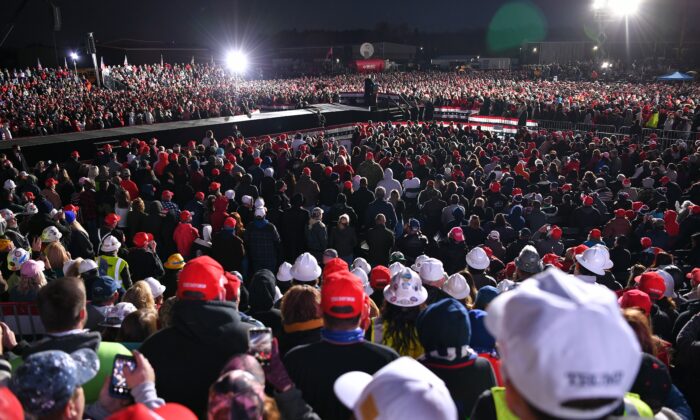 “Donald Trump is doing things that have never been done in Pennsylvania politics in terms of the raw barnstorming across small county Pennsylvania,” Fetterman told CNN on Nov. 1. “It’s hard to predict with certainty how that’s going to activate not only his base of voters from 2016, but also those that sat it out, too.”

Fetterman then sounded the alarm to fellow Democrats who are pinning their hopes on Democratic nominee Joe Biden winning the Keystone State. Pennsylvania and its 20 Electoral College votes would provide a significant boost toward winning the 270 needed to win the White House.

“I’m not saying Donald Trump is going to win Pennsylvania, but what I am saying is he’s doing everything that he can to maximize his chances,” he said.

Trump held multiple events on Oct. 31 in Pennsylvania, including one in Butler County, where tens of thousands of supporters turned out. Photos and videos showed a scene more reminiscent of a rock concert than a political event.

Fetterman on Twitter offered a more urgent warning to Democrats.

“The President is popular in PA. I don’t care what polls say. With 700K ballots still out there, you need to BANK YOUR BALLOT. Use a Dropbox,” he wrote. In another post, he included a Reuters photo of the Butler County rally, writing, “That’s not a photoshop.”

“That’s a @Reuters image of Butler. The Battle for Pennsylvania, and maybe the Presidency will be won or lost by you,” he said.

Fetterman, in an interview with The Washington Post, said he believes that Biden and Democrats have enthusiasm as well.

“I am absolutely convinced that we have a lot of enthusiasm, too, on our side,” he said. “But there’s a lot of factors you can’t extrapolate into a poll that are absolutely significantly in play in Pennsylvania.”

Four years ago, Trump shocked the country when he secured Pennsylvania, Wisconsin, and Michigan by razor-thin margins, propelling him to the presidency over Hillary Clinton. Polls at the time showed Clinton beating Trump in the days before Election Day in 2016.

While in Pennsylvania, the president said he will continue to support fracking, short for hydraulic fracturing, for natural gas in the state. He announced at a rally that he had signed an executive order to protect the practice.