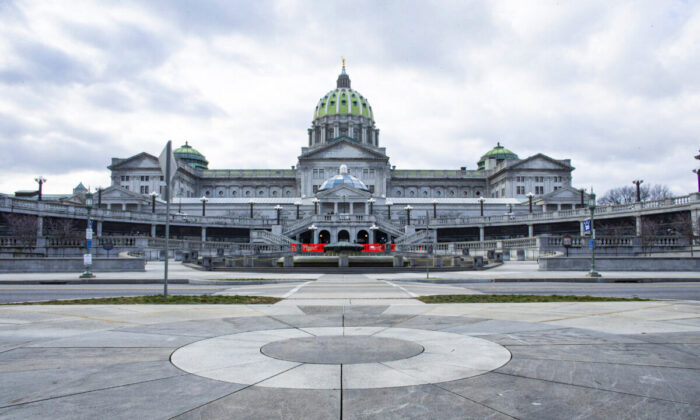 An empty street is seen outside the Capitol in Harrisburg, Pa., on Jan. 17, 2021. (Kena Betancur/AFP via Getty Images)

A Pennsylvania-based think tank that works with lawmakers to enact state policies has released results of a statewide poll that it says shows policymakers “a new pathway to prosperity” through the support of the foundation’s 23-point reform agenda.

The right-leaning Commonwealth Foundation released its May poll results on Thursday.

The unelected but powerful, policy pushing foundation said its poll shows most Pennsylvania voters in all parties are united in their dissatisfaction with the direction the state is going—some to the point of wanting to move away.

The poll shows 68 percent say things in Pennsylvania have “pretty seriously gotten off on the wrong track” and 42 percent said they had considered moving to another state or personally knew someone who had already moved or thought about moving.

“Families are leaving for better jobs, educational opportunities, and quality of life in other states,” the Commonwealth Foundation said in a statement about the poll.

Across parties, the top category of concern voters picked was “Rising prices and inflation,” followed by “The economy and jobs,” and third, “Taxing and spending.” Very few participants picked COVID-19, education, or public safety as a top concern to consider in the November general election.

The majority of those polled agreed the following goals are important:

In response to the poll, the Commonwealth Foundation is urging lawmakers to support its 23-point reform agenda, called Better Pennsylvania in 2023.

“If lawmakers or those running for office want to make life better for Pennsylvanians, they’ll adopt these polices and ensure everyone has an opportunity to flourish,” Jennifer Stefano, Commonwealth Foundation executive vice president said in a statement. Many of the proposed policies are items the foundation has advocated for in the past.

Here is a look at the agenda by category, including the percentage of people polled who supported the policy.