Pompeo Speaks on How to Deal With China and CCP 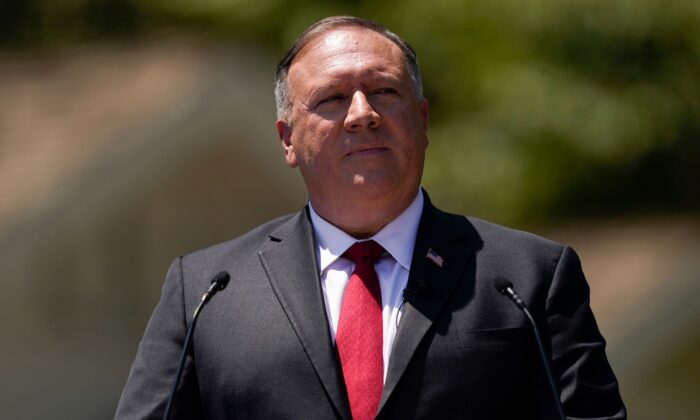 For those of us who knew and admired President Nixon, it was a nostalgic occasion. And after Pompeo had delivered a thorough address on the problems and dangers and requirements of relations between China and the democratic world, the president of the library—distinguished broadcaster Hugh Hewitt—struck a parallel between the Pompeo address and, as he put it, that of another secretary of state with a military background speaking to this secretary’s alma mater, Harvard University, when Gen. George C. Marshall unveiled the Marshall plan there in 1948.

Pompeo’s address was the last of a series of four by senior administration figures designed to attract public attention and the interest of allies to the complicated developing relationship with China. National security adviser Robert O’Brien, FBI Director Christopher Wray, and Attorney General William Barr had all spoken on different aspects of Chinese relations in the past several weeks.

It’s now the principal foreign and national security preoccupation of the government and will remain so after the election, whatever its result.

Pompeo went to some lengths to distinguish what needed to be done with China from the containment policy that was devised and implemented with respect to the Soviet Union.

The USSR was never an economic threat and was never seriously integrated in the world economy, where much of the threat posed by China is precisely the theft of industrial and technological intelligence, and the undermining and usurpation of much of the basis of the commercial prosperity of the West.

While the Soviet Union required military containment, including assistance against armed rebellions based on militant ideological differences in underdeveloped countries, the threat from China is a combination of economic and technological skulduggery and the gradual assertion of a sphere of military and economic influence over an ever-widening part of the world, gradually approaching the North American and Western European citadel of our democratic civilization.

In one of the questions afterward, Hewitt presciently asked if there was a comparison to be made between Nixon’s triangulation of Great Power relations with his historic visit to Beijing in 1972, and the current status of Russian–American relations. Pompeo delicately implied that President Donald Trump is exploring a relationship with Russian leader Vladimir Putin that could capitalize on a shared concern about the expansion of Chinese influence at the expense of both the former Soviet Union and Russia itself, and America’s East and South Asian allies.

Distinguishing the CCP From China

As is now the common practice of this administration, a distinction is made between China and the Chinese Communist Party (CCP). Hewitt posed a question, based on a comment by the director of the Council on Foreign Relations, Richard Haass, that the distinction is spurious.

Pompeo replied that it’s legitimate as the United States and the West generally want to stop dishonest Chinese commercial practices, intellectual property theft, and the intimidation of other countries, although not to impose an airtight segregation of China from the rest of the world.

Pompeo endorsed Nixon’s declared goal of bringing China back into the world and conducting useful relations with it, while updating President Reagan’s policy toward the Soviet Union, “Trust but verify,” to “Mistrust and verify,” while hoping to incentivize a reform of dishonest Chinese practices.

He declared what is intended to be the Western policy to “engage and empower the Chinese people—a dynamic, freedom-loving people who are completely distinct from the Chinese Communist Party.”

The Chinese have no history of freedom in 4,000 years, but in the present racially charged climate, it’s justifiable to distinguish between one of the world’s ancient and eminent nationalities and its current official regime. The idea is to reciprocate the Chinese meddling and espionage and propaganda effort by inciting as much righteous objection to the totalitarian oppression of the Beijing regime as possible.

There is no reason for us to continue to practice unilateral restraint in dealing with the Chinese threat.

Pompeo lamented that Chinese intimidation has already effectively immobilized and intimidated several U.S. allies. Nonetheless, he believes the state of international resolution will rise steadily among most traditional American allies. They need to be convinced of the seriousness of the United States in assisting all countries to resist unfair pressure from China, and will become more resolute as long as they understand that it’s only dishonest conduct by the Chinese that is opposed, not any fundamental hostility to China itself.

He raised the interesting point of creating an alliance of Democratic states. From my modest and completely unofficial podium, I have often suggested that NATO be reconstituted not as a North Atlantic organization, but as a defensive alliance of at least semi-democratic states all over the world, reciprocally guaranteeing existing frontiers and arrangements.

The logical cornerstones of such an alliance on the edge of the declared areas of Chinese expansionist ambitions are India, Japan, Indonesia, Australia, and, if there isn’t an early improvement in Chinese conduct, Taiwan. Vietnam is not democratic and the Philippines and Thailand at the moment are playing footsie with Beijing.

It’s a fluid situation but by any calculation, the United States and its reliable allies have the ability to assemble all the political, economic, and military strength needed to protect the legitimate interests of all associated countries.

The secretary of state acknowledged candidly the failure of the long-standing hope that accommodation of China and indulgence of its idiosyncratic notions of international agreements would gradually lead to a policy of responsible compliance with agreed international rules.

He left conspicuously open the possibility that the CCP deliberately exported the coronavirus to the world to sow political and economic chaos among its chief competitors.

Pompeo announced and encouraged relentless responses to Chinese human rights violations and the breaking of treaty obligations, including the Uyghurs and Hong Kong. (Tibet wasn’t mentioned.)

And he was particularly critical of Hollywood: “the epicenter of American creative freedom and self-appointed arbiters of social justice,” for being obsequious “self-censors (of) even the most mildly unfavorable references to China.”

Pompeo declared that China “is increasingly authoritarian at home and more aggressive in its hostility to freedom everywhere else.” This is not obviously true, but it is certainly true that China is becoming much more efficient and formidable in its ability to control its own population and to discomfort countries that are inadequately submissive.

He concluded by asking “every leader of every nation to start by doing what America has done—to simply insist on reciprocity, transparency, and accountability from the Chinese Communist Party.” It was an excellent speech presaging a very necessary adjustment to American and Western foreign and security policy.

Conrad Black has been one of Canada’s most prominent financiers for 40 years, and was one of the leading newspaper publishers in the world. He is the author of authoritative biographies of Franklin D. Roosevelt and Richard Nixon, and, most recently “Donald J. Trump: A President Like No Other.”

‘America Needs to Lead the World’ in Ending...