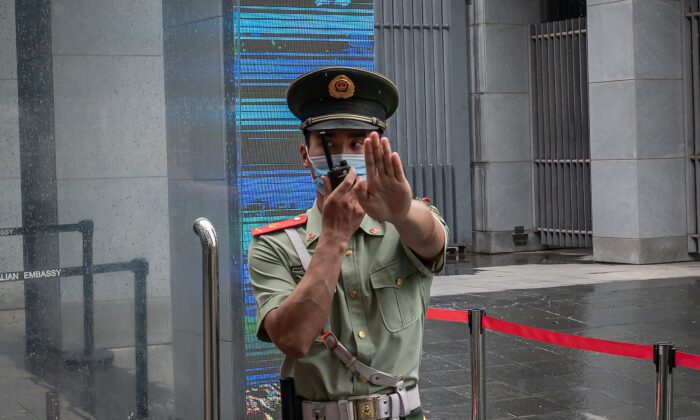 A Chinese paramilitary police officer gestures and speaks over his two-way radio whlie standing at the entrance gate of the Australian embassy in Beijing on July 9, 2020. (Nicolas Asfouri/AFP via Getty Images)
BY VICTORIA KELLY-CLARK

The Australian Strategic Policy Institute laid out the tactic in its new report, published on Sept. 1, titled “The Chinese Communist Party’s coercive diplomacy.” The report identifies a range of non-militarized threats and negative actions the CCP uses to force target countries to change its behaviour.

Non-economic measures incorporate arbitrary detention, the execution of expatriates from the target nation, restrictions on official travel, and state-issued threats.

“The CCP’s approach is unique in that it rarely employs traditional methods of coercive diplomacy, which are regulated through the state’s official capacity,” the report noted, explaining that the tactics are often tied to a threat to the CCP’s core interests.

Globally, the CCP has deployed coercive diplomatic tactics 100 times on 27 countries in the past ten years including European countries, the United States, Canada, Australia, New Zealand, and East Asian countries; and 52 times on foreign companies—with a sharp increase since 2018.

Australia, ASPI noted, has born the brunt of many of the CCP’s coercive tactics, copping 27 threats.

Australia has seen an escalation of these tactics in the past eight months after the government called for an inquiry into the origins of SARS-CoV-2 virus with both the CCP foreign affairs spokesperson, the Chinese embassy in Canberra, and the Chinese consulate in Sydney publishing threats and warnings to the Morrison government.

According to the ASPI, these coercive tactics only stopped when the targeted nation gave into Beijing on international issues.

Citing Norway as an example, the report noted the breakdown in relations with the CCP after Norway awarded a Nobel prize to Chinese dissident Liu Xiaobo in 2010; the CCP first threatened and then followed through with, economic sanctions on Norwegian salmon.

After six years, diplomatic relations improved once Norway changed its policy and showed support for Beijing’s goals by refusing to meet with the Dalai Lama in 2014, publicly supporting the “One Child” policy, and supporting China to be an observer in the Arctic Council in 2013.

That said, ASPI noted: “China is highly calculative and risk-averse in imposing these sanctions so as to avoid any damage to the Chinese economy.”

University of Technology Sydney Professor James Laurenceson, from the Australia–China Relations Institute, agrees with this point, arguing on ABC Radio on Sept. 1 that the CCP does not want to hurt its economic bottom line.

“I think back to the wine incident in 2017 which lasted approximately three weeks, and after that, the flows of wine into China started proceeding again, and in fact, at the end of the year Australian wine exports to China hit a record high,” Laurenceson said.

Currently, exports to China are at an all-time high, the Australian Financial Review reported on Aug. 4. Nearly half of Australia’s goods, or 48.8 percent, are exported to China as the communist regime instigates an aggressive stimulation policy for its economy.

ASPI notes that Australia can overcome these tactics if they band together with like-minded nations creating a bloc that responds to coercive threats by pursuing coordinated actions that push back through international entities like the G7, G10, World Health Organisation, and the World Bank.

“Using their collective intelligence arrangements, the Five Eyes countries could make authoritative joint attributions of any coercive measures levied against any of the five members and take collective economic and diplomatic measures in retaliation,” ASPI argued.