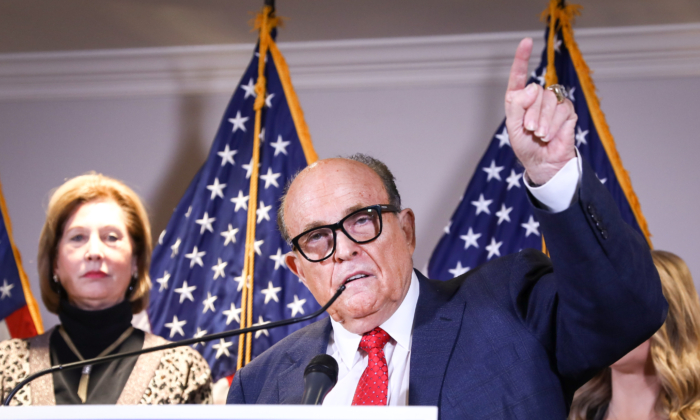 The reelection campaign of President Donald Trump and a handful of Republican groups are litigating more than a dozen active post-election cases in Pennsylvania, Michigan, Georgia, and Nevada as of Nov. 23, with some of the cases already moving up the judicial pyramid.

The plaintiffs are racing against time with just over two weeks left until the safe-harbor deadline on Dec. 8, when the states are supposed to have resolved all disputes and settled the vote counts. The legal pathways toward altering the election outcome will narrow significantly after the safe-harbor marker, given that the Supreme Court ended one post-election dispute in Florida in 2000 because it wasn’t completed by that deadline.

An Arizona judge dismissed the last post-election legal challenge by Republicans in the state last week. The Grand Canyon State’s recount law doesn’t allow aggrieved parties to request recounts and the campaign fell two-tenths of a percentage point short of the margin needed for an automatic audit. The state’s deadline for certifying the election results is Nov. 30.

Likewise, Republicans have no election lawsuits pending in Wisconsin, where a recount of the presidential election is ongoing in two counties. The Badger State is scheduled to certify its election results on Dec. 1, a day after Arizona. A recount is also pending in Georgia.

With 79 electoral votes between them, Pennsylvania, Georgia, Michigan, Wisconsin, Arizona, and Nevada will likely decide the outcome of the 2020 presidential election. The Epoch Times will not call a winner until members of the House and Senate—between Jan. 6 and Jan. 20—count the electoral votes and pick the president.

Enough votes are at stake in the lawsuits in Michigan, Pennsylvania, and Georgia to alter the outcome of the election, but only if the courts in each state deny former Vice President Joe Biden the victory he unofficially claimed earlier this month. Biden is the projected winner in all six states and Trump has a substantial legal hurdle to clear to defy the projections, even if the recounts in Wisconsin and Georgia reverse the unofficial outcomes.

The president’s election legal team has nonetheless projected confidence that the court challenges will result in an ultimate victory for Trump. Former New York Mayor Rudy Giuliani, the lead attorney on the team, said at a press conference last week that the battle ahead is about more than overturning the projected results.

“We are confident that through these multiple pathways to victory, we will get to the actual outcome that the evidence shows,” Giuliani said, after alleging a number of types of election malfeasance and widespread voter fraud.

“This is not about overturning an election on our part, it’s about making sure that we protect and preserve free and fair elections for all future American elections,” he said. “If the United States caves to corruption or this type of election integrity disaster, then no election will be secure from here on out, and we all need to be keenly aware of that.”

Legal scholar Alan Dershowitz, who represented the president during the impeachment trial but isn’t part of the election effort, was less confident about the outcome.

“I think that President Trump is running out of legal challenges,” Dershowitz told The Epoch Times. “He may have the law on his side in Pennsylvania and maybe some other states, but he doesn’t have the numbers, or the evidence, at this point in time. The margin of victory in Pennsylvania seems to exceed the number of challenged votes, and the evidence of computer glitches or tampering—I haven’t seen it yet.”

The Trump campaign and Republicans have nine active lawsuits in the Keystone State, more than all the other states combined. The campaign’s flagship case in the commonwealth—Trump v. Boockvar—was dismissed by a federal judge on Nov. 21 and the campaign swiftly appealed to the 3rd Circuit Court of Appeals. Giuliani said in a statement that the prompt dismissal helped speed the case along to the Supreme Court.

Days earlier, Republicans asked the Supreme Court to review another lawsuit, Bognet v. Boockvar. The 3rd Circuit on Nov. 13 sided with the defendants in that case in an opinion that forced the Trump campaign to significantly revise its original complaint in Trump v. Boockvar, narrowing the number of counts to two from seven and later acknowledging that only one of the two remaining counts was included for the purposes of subsequent appeal.

A new lawsuit filed by a Republican lawmaker and several GOP congressional candidates over the weekend, Kelly v. Pennsylvania, seeks to either block the certification of election results or to exclude mail ballots from the count. The plaintiffs allege that Pennsylvania’s vote-by-mail statute violates the commonwealth’s constitution.

In a handful of other cases, Republicans are challenging small batches of votes. On Nov. 23, the Pennsylvania Supreme Court dismissed six such appeals—five from the Trump campaign and one from a Republican candidate, which challenged a total of 10,684 mail and absentee ballots due to the voters failing to write in their name, address, date or a combination of the three on the outer ballot envelopes. Earlier the same day, a judge in Westmoreland County ruled in favor of a Republican and ordered the county’s Board of Elections to not count 213 provisional ballots.

Michigan certified its election result on Nov. 23, declaring Biden the winner in the state. The Trump campaign and a right-wing group nonetheless have two pending lawsuits in the Wolverine State.

The campaign lawsuit, Trump v. Benson, is pending appeal by the Michigan Court of Appeals. The appeal sought an order from the court directing the Michigan secretary of state to “direct local election jurisdictions to allow election challengers to observe the processing and adjudicating of ballots and election challengers to observe video recordings of absent voter ballot drop off boxes according to Michigan law.”

It is unclear if the appeal will stand given that Michigan has certified the election results.

“Certification by state officials is simply a procedural step. We are going to continue combatting election fraud around the country as we fight to count all the legal votes. Americans must be assured that the final results are fair and legitimate,” Jenna Ellis, Trump campaign senior legal adviser, said in a statement.

The certification of the results may nonetheless revive another lawsuit, which the Trump campaign dismissed after Republicans on the board of canvassers in Wayne County rescinded their votes for the certification of the county’s election results. The campaign sought the same result in its lawsuit and filed a voluntary dismissal after the Board of Canvassers members signed affidavits withdrawing their votes. The statewide certification, which overrides the Wayne County decision, is likely to revive the lawsuit.

The Trump campaign didn’t immediately respond to a request for comment.

A separate third-party lawsuit, Costantino v. Detroit, is on appeal before the Michigan Supreme Court. The plaintiffs in that lawsuit sought to block the certification and demanded either an audit or a new election.

Republicans have four active cases in front of the state court in the Silver State. The only federal case—Stokke v. Cegavske—though technically active, hasn’t had a filing for days after a judge rejected a motion for an injunction.

“Technically the case is active, however, all of the relief requested in the complaint could only be granted prior to the completion of vote counting,” Robert Kern, an attorney for the plaintiffs, wrote in an email to The Epoch Times. “So while the case remains, any chance for it to accomplish anything ended with the denial of their motion for an injunction.”

The Trump campaign is backing an election contest—Law v. Whitmer—brought by the president’s electors against the electors for Biden. The lawsuit alleges widespread voter fraud, including a claim that 15,000 people who voted in Nevada also voted in other states.

The attorney for the plaintiffs in a lawsuit brought by Daniel Rodimer, a Republican candidate for office, called on the judge in the case, Gloria Sturman, to recuse because she belongs to a Democratic group with a stated goal of flipping House seats. Sturman declined to recuse and referred the motion to the court’s chief judge. Rodimer is challenging the use of ballot-processing machines and asking the court to order a new election.

Lawsuits brought by two other Republican candidates for office are also challenging the use of ballot machines. A hearing is scheduled for Nov. 24 in the case brought by April Becker, a candidate for Nevada Senate. Republican House candidate Jim Marchant will have his case heard on Jan. 5. Both plaintiffs are calling for a new election.

A lone lawsuit is still active in Georgia, which wrapped up a risk-limiting audit and certified its election results last week. In Wood v. Raffensperger, an attorney associated with the Trump campaign sued Georgia’s secretary of state seeking to enjoin the certification of the election results. A federal judge dismissed the motion for an injunction.

Wood’s original filing included sworn affidavits from people who witnessed the risk-limiting audit and alleged alarming errors and potential fraud. Three witnesses alleged that Trump votes were counted for Biden. At least eight others said they witnessed batches of pristine, uncreased absentee ballots. The condition of the ballots was a red flag because absentee ballots are folded in order to be placed in a privacy envelope, regardless of whether they’re cast in person or by mail.

Republican attorneys have also hinted that the campaign is ready to file a major lawsuit in the Peach State with allegations not yet raised in any of its other litigation.

Jan Jekielek contributed to this report.